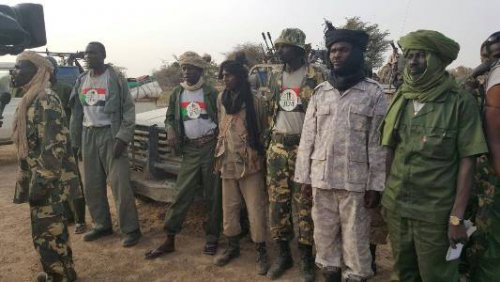 NYALA (HAN) March 10,2016. Public Diplomacy & Regional Security News.  A Darfur rebel commander Wednesday broke away from the Justice and Equality Movement (JEM) and announced his commitment to the Doha Document for Peace in Darfur (DDPD).

19 fighters led by former JEM commander Mahdi Adam Ismail arrived to the capital of South Darfur State, Nyala, where they announced their split from the rebel group, saying they “opted for peace after negotiations led by the traditional leaders”.

Ismail further told reporters in Nyala that they handed over four combat vehicles and their weapons to the security services in the city in preparation for the implementation of the security arrangements.

The defection of the rebel commander is the third of its kind in the rebel group since the signing of the DDPD in July 2011. The most important split was led by Mohamed Bashar and Abdel Karim Dabajo in 2012.

A smaller group led by Younis Mansour Arbab broke away from JEM after its defection in April 2015’s battle when the group massed all its troops and attacked South Darfur state.

JEM spokesperson Gibril Ibrahim Bilal admitted the defection in a statement he extended toSudan Tribune on Wednesday, saying that Ismail had been authorized to move out of the rebel base with four vehicles after claiming he wants to meet people wishing to join the group in a location not far from the whereabouts of the movement forces.

“Ismail was allowed to move with four vehicles three of it are armed and the fourth was an ordinary vehicle. He was accompanied by 15 fighters most of them had no knowledge of his plan,” Bilal further said.

He said they would integrate the Sudanese army in accordance with the DDPD and called on the armed groups to listen to the voice of reason and join peace and development.

After receiving the defectors at premises of the state government, South Darfur deputy-governor Tayeb Hamid Abu Rida granted amnesty for all members of the group.

He further called on the holdout armed groups to opt for peace, stressing that talks are the only and best way to get rights. Also, he said the state government will provide all the needed facilities to the group until the implementation of the security arrangements and their integration in Sudan Armed Forces (SAF).

The commander of the 16th Infantry Division, Major-General Adel Hamad al-Nil said they escorted the dissident group until their arrival to the South Darfur state capital.

The Sudanese army had been blamed for not ensuring protection to Mohamed Bashar after the signing of a peace agreement in Doha in April 2013. His convoy was ambushed while he was returning to Darfur from Chad. (ST)