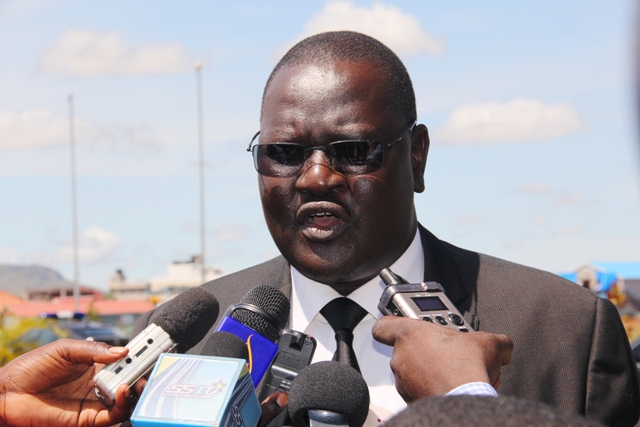 JUBA (HAN) June 10.2016. Public Diplomacy & Regional Security News. President Salva Kiir’s office has finally revealed that it was responsible for the controversial article which found itself to The New York Times, proposing to scrap from the peace agreement justice and accountability clauses over crimes committed during the war.

They also insisted that the article, published by The New York Times on Tuesday and later on by some other media outlets, was written in the office of the President with the agreement of the First Vice President, Riek Machar.

Ateny Wek Ateny, on Thursday revealed that the article originated from the President’s office and called on the people and the media to take only his statement as the overall spokesman in the Presidency.

“The opinion article was from the President and the First Vice President about the issue of transitional justice and truth and reconciliation,” Ateny told the media.

“After the signing of the peace agreement and formation of the transitional government of national unity, the spokesperson for the whole presidency is me,” further claimed. “And it was written from my office.”

Also, an ambassador, Gordon Buay, who is allied to President Kiir and works in the South Sudan’s embassy in Washington DC, issued a separate statement on Thursday, confirming that the article was sent to The New York Times by Ateny Wek Ateny and sent another copy to him [Buay].

Buay revealed that he helped in contacting The New York Times and convinced the US-based news organization to publish the article as an Op-ed.

He criticized the office of the First Vice President, Machar, for disowning the article, adding that what President Kiir’s press secretary, Ateny Wek Ateny, confirmed about the alleged agreement between the two top leaders to write the article was the truth.

He also criticized any other press secretary including Machar’s spokesman, James Gatdet Dak, for refuting the claim over the article, echoing that only Ateny Wek is now the spokesman for the whole Presidency after formation of the transitional government of national unity (TGoNU).

“Ateny Wek Ateny, who is the official spokesman of the entire Presidency, came out and said that both the President and the FVP [First Vice President] wrote the article published by The New York Times,” Buay said in a statement he circulated on social media.

Buay warned that the “government” will sue media houses who will continue to refer to comments as from the spokesperson from the office of the First Vice President.

But Machar’s spokesperson, James Gatdet Dak, dismissed the claims by the officials from the president’s office, saying there was no need to dictate people into accepting the “falsified article.”

“Well, what I know is that we work as partners in the transitional government. No one party should author an opinion and insert the name of the other partner as co-author. This is illegal and cheating,” Dak said.

“And this is particularly a serious matter when the other partner attempts to violate the peace agreement by trying to scrap the vital clauses on justice and accountability,” he added.

He also said the Presidency derived from a coalition government is united by the August 2015 peace agreement, which he said, was like a contractual agreement that no one partner should temper with.

“I suspect that there is desire by others to control the flow of information to the public or to the media no matter how incorrect the information is. However, their desire is wrong. And they should be corrected whenever they are in the wrong,” he said.

He added that there is nothing called press secretary for the entire Presidency of the coalition government composed of different partners, offices and parties, saying it is not even practical.

“There can be one information minister or government’s official spokesperson, even in a coalition government, but not one press secretary or spokesperson for different institutions or top executive offices,” he said.

The peace agreement signed between the parties provided for mechanisms through which to pursue justice and accountability for the crimes committed.

The attempt to dodge accountability attracted fierce criticisms from the public who called for justice to be served by bringing to book through a hybrid court the criminals.