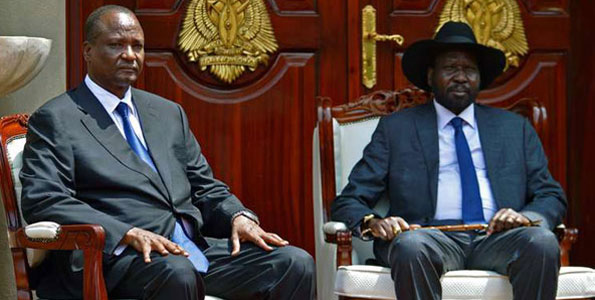 The new first vice-president Taban Deng Gai has visited Kenya, Uganda and Sudan to persuade the regional leaders to accept the changes and help implement the peace agreement without Dr Machar.

Juba sees Dr Machar —who is in DR Congo receiving treatment— is the stumbling block towards implementation of the August 2015 peace deal following the recent fighting that broke out on July 8 between forces loyal to both Kiir and Machar.

In Juba, government spokesperson Michael Makuei Lueth, advised Dr Machar to stay out of politics and await for the elections which are scheduled to be held after 30 months of the transitional government of national unity.

However, the Inter-Governmental Authority on Development (Igad) leaders’ meeting in Addis Ababa, Ethiopia called for the reinstatement of Dr Machar to his former position and declared the leadership changes as null and void.

“Regional countries are receiving Mr Gai to reinforce the Addis resolution and any attempts to isolate Dr Machar will not work. The Addis resolution clearly stated that any changes is an internal SPLM-IO matter and Mr Gai has no authority to speak on our behalf because he has defected to the government,” said Lam Jok, Machar’s Sudan People’s Liberation Movement-in–Opposition representative in Kenya.

Sudan Minister of Foreign Affairs Kamal al Dein Ismail, said that even as they received Mr Gai, Khartoum also reiterated its solid stance towards Igad resolutions and the importance of solving the Juba’s problem through negotiations with all parties.

After President Kiir formed the transitional government with Dr Machar as his deputy in April, fighting broke out in July between forces loyal them due to disagreements on security arrangements.

Dr Machar has maintained that he will not return to South Sudan until a regional protection force is sent to Juba as a buffer.  The UN Security Council has approved the deployment of 4,000 regional force but Juba is still consulting on the size, the mandate and the type of weapons they are supposed to have.