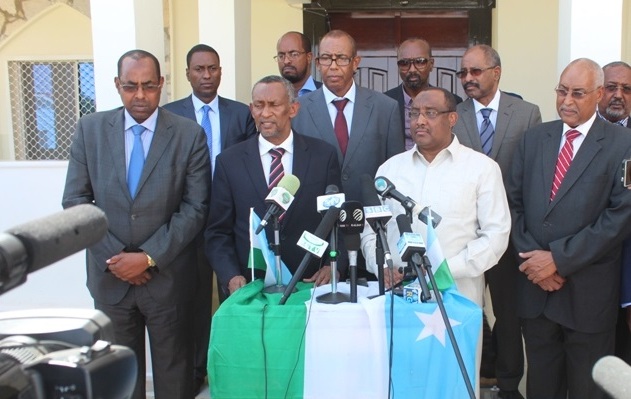 GAROWE (HAN) March 30. 2016. Public Diplomacy & Regional Security News.  President Abdiweli Mohamed Ali has warmly welcomed the
arrival of a high-level delegation led by the Executive Secretary (ES) of the
Intergovernmental Authority on Development (IGAD), Ambassador Mahboub Maalim at the
State House. He arrived today on an official visit to Puntland.
The Executive Secretary of IGAD Amb. Mahboub Maalim and the IGAD Special Envoy to
Somalia Amb. Mohamed Affey, along with senior directors of IGAD departments were
greeted by President Abdiweli, Vice President Abdihakin Abdullah Omar Amey, and the
Puntland Cabinet of Ministers, as well as, Speaker of the House, and other senior officials
during a luncheon.
“It is a pleasure to welcome the Executive Secretary of IGAD and his delegation to
Puntland. We are honored by the opportune and high-level nature of his visit. We welcome
the opportunity for the ES and his delegation to meet and discuss how IGAD can support
Puntland development goals,” said President Abdiweli.
“This long expected visit highlights IGAD’s commitment to the development of its member
states, in particular economic infrastructure.” He continued.
For his part Executive Secretary Mahboub thanked the President and the people of
Puntland for the warm welcome and reaffirmed his commitment to Somalia’s developmental
goals, Puntland in particular. The Executive Secretary also confirmed IGAD’s support of
phase two of the Bossaso international airport expansion. He congratulated the government
and lauded the recent heroic victories of the Puntland security forces against Al-Shabab
militants.
In addition to the announced support for the Bossaso airport expansion, IGAD will also be
developing a vocational technical school for youth, as well livelihood and draught resilience
project. To keep more direct oversight on these projects, IGAD plans on opening a
developmental office in Garowe.
Though this is the Secretary’s first visit, he promised to return soon to oversee the
launching of the projects. IGAD has a critical role in the future development of Somalia and
the President looks forward to continuing this fruitful relationship.
The President expressed his desire to see more support in the creation and development of
Puntland’s infrastructure in the future.