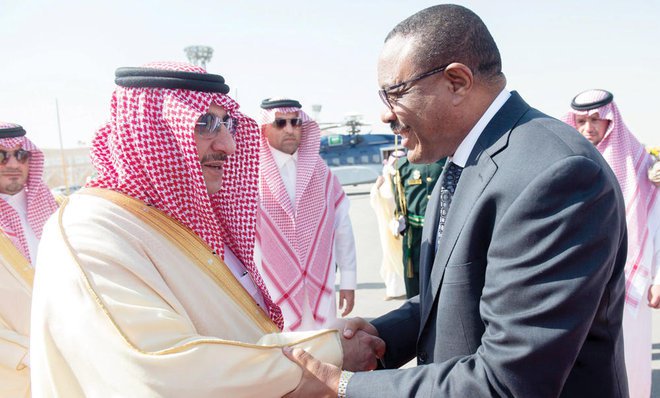 Prime Minster Hailemariam Dessalegn met with Deputy Premier and Minster of Interior, Crown Prince Mohammed bin Naif at his palace on Sunday (November 21). On arrival at the Riyadh airbase, Prime Minister Hailemariam was received by the crown prince, Riyadh Gov. Prince Faisal bin Bandar, State Minister and Cabinet Member Usaed bin Mohammed Al-Aiban, and a number of senior government officials. Special Aide to the Prime Minister, Ewnetu Bilata, noted the discussion between Hailemariam and the deputy premier was mainly focused on economy, trade, investment, terrorism and peace. The Premier on the occasion called upon Saudi investors to increase their investment in Ethiopia, particularly in agriculture, animal breeding and fattening, trade and leather industry. According to the Special Aide to the Premier, the two sides also discussed on how to team up efforts to bring peace, security and stability in the Horn of Africa and the Middle East.

The visiting premier also met Commerce and Investment Minister Majid Al-Qassabi, Deputy Minister of Finance Hamad bin Sulaiman Al-Bazei and attended a reception hosted by Ambassador Amin Abdulkadir in his honor, where he met a large number of Ethiopian expatriates in the capital.

There are 303 Saudi projects operating in Ethiopia and investment between the two countries has reached SR 7 billion. The projects have created more than 58,798 permanent and 189,695 temporary employment opportunities in Ethiopia.