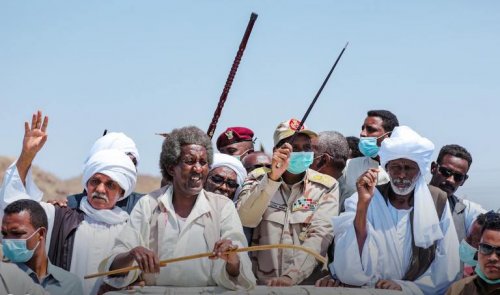 October 7, 2020 (KHARTOUM) – The Sudanese authorities announced, on Wednesday, the resumption of activities at the southern section of Port Sudan on the Red Sea after its closure last Sunday by Beja protesters.

Last Sunday, demonstrators protesters Southern Port Sudan to express their rejection of a peace agreement the government signed with some Beja factions in Juba.

The Governor of the Red Sea State, Abdallah Shangari, stated that the agreement to open the port was based on several points “centred on reaching positive results for the Eastern Sudan Track in the Juba negotiations”.

Shangari was alluding to their demand to no implement the peace deal struck with the Sudanese Revolutionary Front (SRF) within the framework of the comprehensive peace agreement in Juba.

The police official stressed that the agreement included some measures to prevent impeding the activities of the port, such as the sit-in should be held far from the port gate, and not to block the arrival of workers and the circulation inside the port, under the supervision of the police.

In a meeting held in Khartoum on Tuesday, the Security and National Defence Council said that it had taken decisions to prevent disruption of activities of Port Sudan facilities or roads in eastern Sudan.

The legitimacy of the Beja Council has been contested by three Beja groups. Also, the government seeks to peacefully contain the political obstruction exerted by some tribal leaders who reject the appointment of a new governor in Kassala State and the peace deal for East Sudan.

In a speech at a ceremony held in Juba on Wednesday, Osama Said the head of Beja Congress called for negotiations with the opponents to the peace agreement to “avoid bloodshed and to promote security and community peace”.