Home frontpage People smuggling in Libya: You can’t bomb away a problem of economics 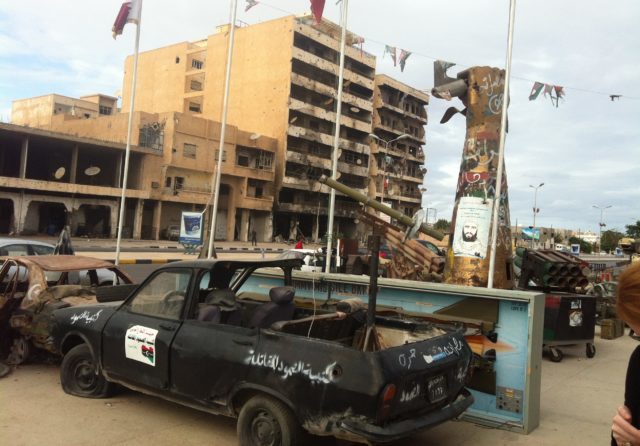 Europe seems to think force and arms are the solution to reducing people smuggling in the volatile and fluid Libya. Even Gaddafi knew better.

Back in 2010, Colonel Muammar Gaddafi famously declared that if it weren’t for his rule in Libya, Europe would “turn black” with the “advance of millions of immigrants”. The wily dictator’s incendiary remarks were rightfully condemned as blackmail, but there was a genuine threat behind them.

Indeed, it wasn’t long after his fall in October 2011 that the number of people crossing the Mediterranean began to rise dramatically. In the couple of years preceding Gaddafi’s overthrow, numbers crossing from Libya and Tunisia to Italy were in the fairly low thousands, but they have since surged to 170,000, 150,000 and 180,000 in 2014, 2015 and 2016 respectively.

Having taken over the rotating presidency of the EU in January, Malta’s Prime Minister has made reaching an agreement with Libya to halt irregular migration his primary objective. But while there is little doubt that Libya is a pivotal part of suppressing the Europe’s “migration crisis”, the current proposal to replicate the Turkey deal in a country with three competing governments in open warfare is unlikely to achieve results.

It continues European efforts focused on strengthening border control and surveillance. Warships have been deployed and, more recently, tentative efforts have been made to reinforce capacity of the Libyan navy and coastguard. But these approaches have had limited effect, not least because Libya has 1,770 km of coastline and 4,348 km of land borders.

However, in all these attempts to stem migration, few if any have asked how Gaddafi himself managed to control numbers during his reign. If they did, they would find that while the dictator did use brutal force, or the threat of it, to intimidate both regional counterparts and factions within the country, he also relied on heavily on economic and political incentives.

Fundamentally, Gaddafi recognised the inherent permeability of borders, not their integrity. And the secret of his control was to decide who would be given the freedom to pass, manage and tax these borders.

By selectively granting trading licenses, funding state investment in strategically-picked towns, and permitting territorial authority to certain ethnic groups over others, he was able to create economic incentives for selected groups and use this leverage to maintain control over markets. Local rights over border management and illicit trafficking became closely linked to national politics and stability, a relationship that has continued into the post-Gaddafi era.

For example, in south-eastern Kufra district, Gaddafi played the Zway (aka Zwai) people off against the Toubou. He denied the Toubou citizenship rights, which included access to schooling and social security. Meanwhile, he empowered and invested in the Zway, giving them the upper hand in smuggling activity across the district and on the route up to the coast. This gave Gaddafi influence over their activity, and the Zway were additionally tasked with policing the region for signs of subversion.

The dictator employed a similar strategy 100km west of Tripoli in the port of Zuwara, which has long been the main embarkation point for people leaving Libya as well as a major hub for the smuggling of alcohol, hashish and subsidised goods to neighbouring Tunisia. As with the southeast, these pursuits were selectively sanctioned under Gaddafi, but kept under close watch by the secret service and certain players themselves, who had a vested interest in keeping an eye out for unauthorised activity.

This arrangement involved suppressing the Amazigh (Berbers), though Gaddafi’s third son Saadi simultaneously served as the patron of largescale infrastructure development intended to confer financial benefits on the Amizagh to prevent political protest.

Through a combination of economic incentives and violence, Gaddafi was able to control markets, both licit and illicit. But with the end of his repressive rule, his discriminatory system of favour ended, and the regime’s weapons stockpile became dispersed across competing militia.

Libya became an ever more volatile place where competition is fierce and alliances shift frequently. In this resulting fluid and unstable context, control over remaining economic opportunities has become crucial to groups’ survival. And in the absence of investment with the country’s formal economy “near collapse“, it is lucrative illicit trades such as people smuggling that have become key to maintaining local legitimacy and political influence.

In Kufra, for example, the long marginalised Toubou were quick to reassert themselves after 2011 and extend their reach in the smuggling of arms, commodities and people; they have subsequently become one of the most significant players in the migrant smuggling industry from the Horn of Africa to Europe. In Zuwara meanwhile, the previously-sidelined Amazigh became central to the port’s ascendancy in becoming Libya’s coastal human smuggling epicentre, particularly between 2014 and 2015.

In such a fragmented and fragile environment, adding more weaponry into the maelstrom of the Maghreb and Sahel would have highly unpredictable outcomes. Following the advice of the former US Navy SEAL, who in a recent op-ed for the FT recommends that private militias be deployed and border police be further armed along the Sahara, would come with serious risks of only stoking the firefight.

But there are alternatives to the militarised approach. Instead of imagining Libya’s deeply embedded people smuggling industry can be bombed out of existence, or instead of hoping that strengthening the capacity of state institutions – which Gaddafi intentionally kept weak – will secure Libya’s long and porous borders, policymakers would be better served looking at the reality on the ground.

It is no coincidence that it is marginalised groups such as the Toubou and Amazigh that have dominated the illicit trade since 2011. Nor is it not surprising that, having been broadly overlooked in the initial transition and constitution building process, both groups have largely recused themselves from subsequent engagement with the central state.

If migration flows are to be reduced and long-term stability fostered, it is this complex socio-economic and political competition that needs to be understood so that incentives can be leveraged in a meaningful way.  This of course should not be done in the repressive, discriminatory and ultimately unsustainable mode of Gaddafi, but must include the high and fair recognition of Libya’s multifarious ethnic and religious entities, with their various political and economic roles.

If the EU wants to see a long term suppression of irregular migration, then rather than channelling efforts into futile efforts to force a fragile Libyan authority to “combat” people smuggling, the new Libyan authorities should be assisted in fighting against the unequal citizenship of the Berber, Tuaregs, Toubou and other minorities, as well as the racism against sub-Saharan migrants that allows them to be treated as commodities in local power struggles.

The way to manage migration and foster long-term stability is not more guns, but to offer Libya’s various groups a seat at the table, include them in national narratives, and ensure they have a stake in the growth and distribution of state resources through investment and support.

Tuesday Reitano and Mark Shaw are from the Global Initiative against Transnational Organized Crime, a Geneva-based think tank.  Recent research in Libya was funded under a UN University project by a DFID funded project on the crime-conflict nexus.  Reitano is the co-author, with Peter Tinti, of Migrant, Refugee, Smuggler, Saviour, a book published by Hurst documenting the political economy of smuggling networks to Europe.