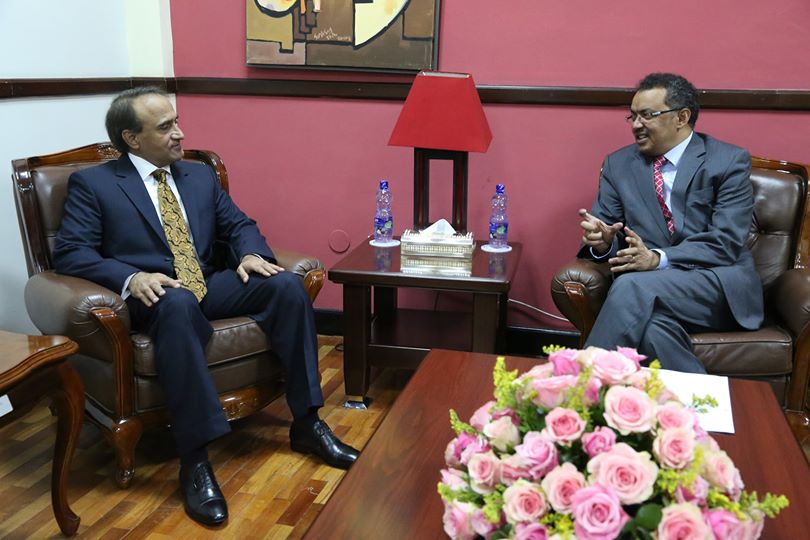 Addis Ababa (HAN) July 20, 2014 – Diplomacy and security news. The Ethiopian Foreign Minister Dr. Tedros met with Ambassador Imran Yawar of the Islamic Republic of Pakistan to Ethiopia. The diplomatic Discussions centered on ways to scale up the economic partnership of the two countries, expedite high-level contacts and exchanges and inject new impetus to fast-track all–rounded cooperation.

The Ethiopian Foreign Minister Dr. Tedros noted that the two countries had historic ties and said these could be considered as a bridge to deepen economic cooperation that would benefit their peoples in the years ahead. He emphasized that Ethiopia welcomed investors from Pakistan for the realization of common development, and said Ethiopia attached special importance to uplift Ethio-Pakistan links to a new high. He urged the need to lay a foundation for the close cooperation and partnership of the two countries’ business communities to set-up a platform that would elevate economic growth and development into new heights. He said Ethiopia was committed to prevent impediments related to trade, investment and business climate and wanted to foster enabling conditions for business persons and investors.

Ambassador Yawar said his country was intending to establish an Ethio-Pakistani Business Council to accelerate and enhance the closer engagement between the Ethiopian Chamber of Commerce and Sectoral Associations and the Federation of Pakistan Chambers of Commerce and Industry.

Ambassador Yawar noted Ethiopia’s remarkable double digit economic growth over the last decade and said Pakistani investors would benefit from this growth and would be able to contribute to the positive momentum of Ethiopia’s economic development. He said Pakistan’s private sectors were interested in participating in Ethiopia’s investment in various sectors including infrastructure, construction and manufacturing as well as other priority areas.

Ambassador Yawar  pledged that Pakistan was willing to share experiences in major areas of common development, and also stressed the need to strengthen high-level contacts and exchanges to expedite the political and diplomatic relations. Yawar requested the Government of Ethiopia to open an Ethiopian Embassy in Islamabad to further cement bilateral relations. He also said Pakistan was interested to draw lessons from Ethiopia’s experiences in combating terrorism.

The Ethiopian Foreign Minister Dr. Tedros assured the Pakistani Ambassador that Ethiopia is ready to hold high-level exchanges with Pakistan, jointly combat terrorism and share experiences as well as deepen the economic cooperation for the mutual benefit of the peoples of the two nations.