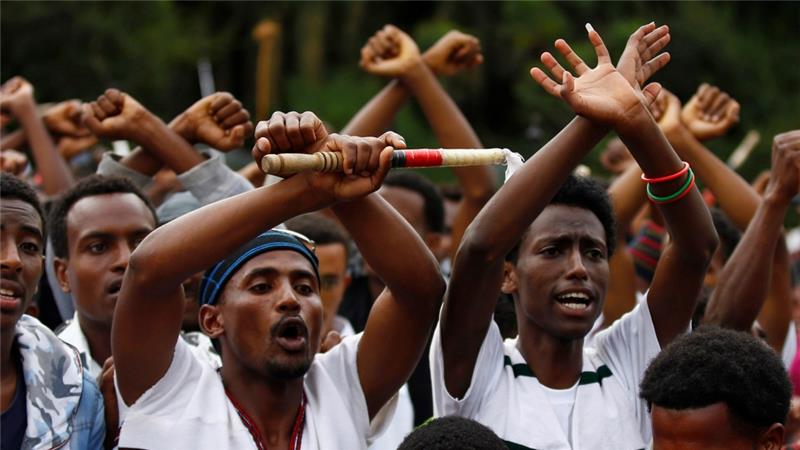 NAIROBI (HAN) November 22.2016. Public Diplomacy & Regional Security News. BY: Awol K Allo. November 12 marked the first anniversary of the Oromo Protests, a non-institutional and anti-authoritarian movement calling for an end to decades of systemic exclusion and subordination of the Oromo.

Although the protests were sparked by a government plan to expand the territorial and administrative limits of Ethiopia’s capital, Addis Ababa, into neighbouring Oromo towns and villages, they were manifestations of long-simmering ethnic discontents buried beneath the surface.

The Oromo are the single largest ethnic group in Ethiopia and East Africa, comprising more than 35 percent of Ethiopia’s 100 million people. Yet, Oromos have been the object of discriminatory and disproportionate surveillance, policing, prosecution and imprisonment under the guise of security and economic development.

The year-long protests, which brought decades of hidden suffering and abuse to the Ethiopian streets, were held under what Human Rights Watch described as a “near-total closure of political space”.

As the protests grew in magnitude and intensity, the government responded with overwhelming and disproportionate force, unleashing what Amnesty international called “a vicious cycle of protests and totally avoidable bloodshed”.

The failure of the government to respond to long-standing grievances and the deployment of disproportionate violence which killed hundreds, exacerbated the tension, transforming what was a single-issue protest into a formidable mass anti-authoritarian movement.

The protests reached a turning point on August 6, 2016, when hundreds of thousands of people marched in more than 200 towns and cities to resist the government’s draconian and ever-escalating repression.

Another milestone came on October 2, 2016, when security forces fired tear gas and live bullets on a crowd of over two million people gathered to celebrate Irreecha, a cultural festival in which Oromos from all walks of life congregate to celebrate life and nature. While the government acknowledged the deaths of 52 people, local reports have put the number in the hundreds.

On October 9, 2016, the government declared a state of emergency, giving security forces and the army new sweeping powers in one of the most censored countries in the world, where the security apparatus is already extensive and permeates all levels of social structures, including individual households.

The government blocked mobile internet, restricted social media, banned protests, closed down broadcast and print media, including the influential Addis Standard magazine, and imposed draconian restrictions on all political freedoms. In its recent report analysing the effect of the emergency, Human Rights Watch described the measures as the securitisation of legitimate grievances.

According to the government’s own figures, more than 11,000 people have been arrested since the emergency was imposed.

Under international law, states can impose restrictions on the exercise of rights and freedoms “in times of public emergency threatening the life of the nation”. However, a state of emergency does not give the government carte blanche to do as it pleases.

Governments can only take those measures that are necessary and proportionate to the threat. The measures being taken by the Ethiopian state go far beyond what is required by the exigencies of the circumstances.

In the name of economic development and national security, it established a permanent state of emergency to obscure its lack of democratic mandate, making “development” and “security” the ultimate standards of the regime’s legitimacy.

The protests rose to global prominence when Feyisa Lilesa, an ethnic Oromo marathon runner, crossed his wrists above his head in an “X”, a gesture that came to define the Oromo protests, as he crossed the finishing line at the Rio Olympics to win the silver medal.

If the Oromo protests are a battle of ideas, a contest between those who seek equal opportunity and those who deny these opportunities to all but a few, a conflict between bullets and freedom songs, it was also a battle for the control of the narrative.

Unequal access to education and the means of narrative production excluded the Oromo from mainstream knowledge frameworks, rendering them invisible and unnoticeable, and condemning their culture and identity to a precarious subterranean existence. The Rio Olympics reconfigured this dynamic.

Lilesa’s decisive intervention at one of the world’s biggest stages drew overdue attention to the story of oppression that remained largely invisible to mainstream media.

Suddenly, the Oromo story moved from the periphery of Ethiopia’s political discourse to the centre. As the news media filtered the Oromo story into the global public conscience via Lilesa’s expression of solidarity, it provided a revealing perspective on the fiction underneath the country’s reputation as a beacon of stability and an economic success story.

This movement has already changed Ethiopia forever. It brought about a change of attitude and discourse in the Ethiopian society, repudiating the ideological proclivities and policies of the state. It enabled the society to see the government, its institutions, its symbols and its western enablers differently.

Topics that used to be considered taboo only a year ago, such as the supremacy of ethnic Tigrean elites, are no longer off limits. In short, it enabled suffering to speak.

A year after the protests erupted, and after hundreds of funerals were held, what remains uppermost in the memory of the protesters is not the dead. It is not even the bereaved. It is the stubborn persistence of the Qabso – struggle – in the face of great sacrifice, and the defiant and unrelenting call for equality and justice.

The government knows that it walked right up to the edge of the precipice. But, if it fails to address the grievances of protesters, if it continues to ignore the social fabric ripped apart by policies of divide and rule, if it does not provide justice to the inconsolable grief of parents whose children were shot by security forces, and the quiet but intensely agitated youth who have become the beating hearts of this defiant generation, it may plunge into it.

Awol Allo is Lecturer in Law at Keele University, UK.

The views expressed in this article are the author’s own and do not necessarily reflect Al Jazeera’s editorial policy.