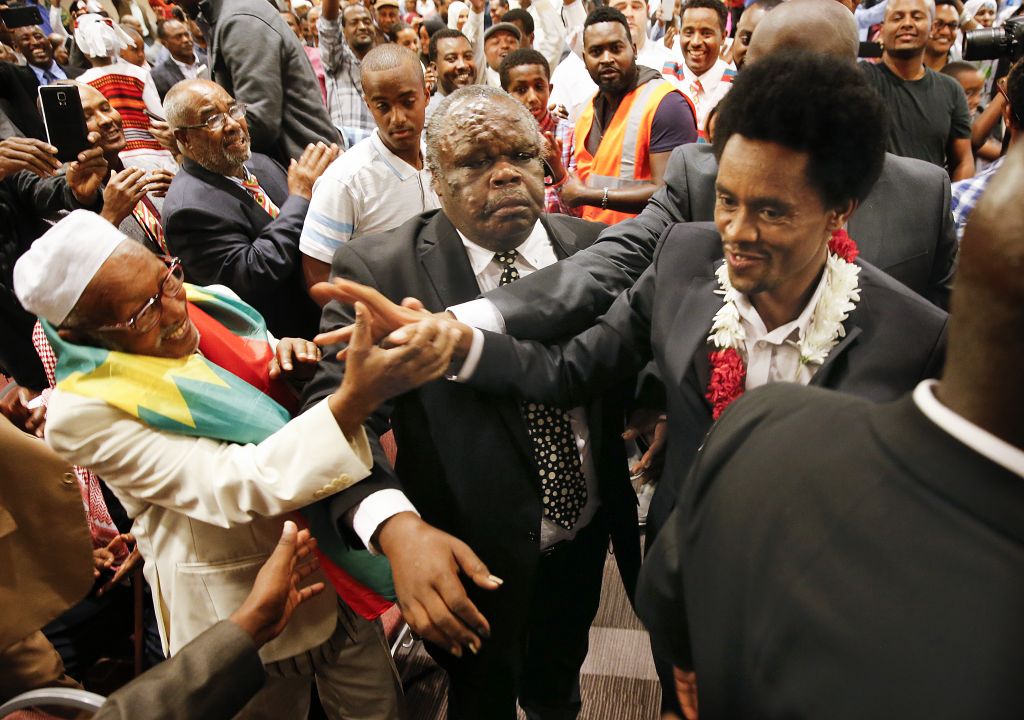 Olympian Feyisa Lilesa entered the Minneapolis Convention Center Sunday, Sept 18, 2016 to a crowd of about 1000 well wishers. He won the silver medal in the 2016 Games in Rio and crossed the finish line with his arms crossed in an X, symbolizing the plight of the Oromo in Ethiopia. 2016

The line outside the Minneapolis Convention Center auditorium Sunday afternoon was nearly a block long, with elders in suits and many women and children in traditional red, yellow and green Oromo dress. It took nearly two hours for the crowd of more than 1,000 to enter. Then Oromo Olympian Feyisa Lilesa made his grand entrance. The silver medalist marathon runner from Ethiopia high-fived an elder in the front row and graciously greeted the crowd.

Lilesa, 26, became a hero to his people and brought global attention to the plight of the Oromo in Ethiopia when he crossed his arms to form the letter X above his head as he crossed the finish line at the Rio Games.

He did the same as he entered the auditorium Sunday and the crowd erupted in cheers.

The Oromo Community of Minnesota said more than 100 Oromo people were killed in Ethiopia in August alone while peacefully protesting the government’s persecution of the ethnic group.

Lilesa, who faces jail if he returns home, has been granted a special skills visa to the United States so he can train and compete. His wife, 5-year-old son and 3-year-old daughter remain in Ethiopia.

His visit to Minneapolis was sponsored by the Oromo Community of Minnesota, headquartered in St. Paul. The group estimates that up to 40,000 Oromo people are living in Minnesota, but the state demographer’s office puts that number closer to 8,500.