Home frontpage ORDINARY SESSION OF THE IGAD ASSEMBLY OF HEADS OF STATE AND GOVERNMENT... 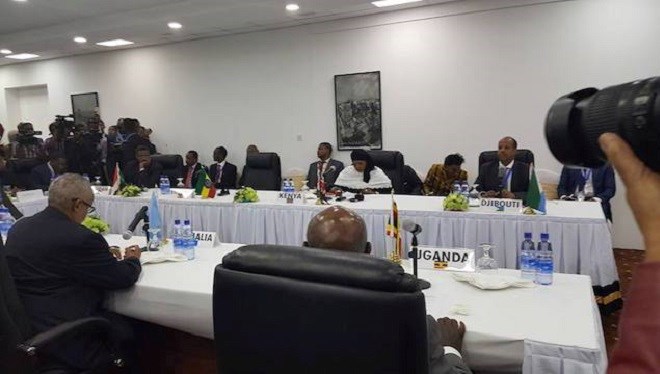 The IGAD Assembly of Heads of State and Government held its 28th Extra Ordinary Summit on 13th September 2016 in Mogadishu, Somalia, under the Chairmanship of H.E. Hailemariam Desalegn, Prime Minister of the Federal Democratic Republic of Ethiopia and Chairperson of the IGAD Assembly.

The Summit was also attended by the representatives of the United Nations (UN), the African Union Commission, the League of Arab States and the European Union. It was briefed by H.E. Mohamed A. Affey, IGAD Special Envoy to Somalia.

After holding extensive discussions on the developments in Somalia, the Summit issued the following communiqué.

The Summit: 1. Reaffirmed its respect for the sovereignty, territorial integrity, political independence, and unity of Somalia;

2. Welcomed the update of the Federal Government of Somalia (FGS) on the implementation of the 2016 electoral process;

3. Reiterated the ownership of the FGS in leading and setting the priorities for its stabilization and reconstruction in an all-inclusive manner;

4. Commended the recent Somali National Leadership Forum (NLF) meeting in Mogadishu on the 2016 electoral roadmap and endorsed its outcome;

5. Welcomed the FGS commitment to a credible, transparent and inclusive electoral mechanism towards a peaceful and democratic transition;

6. Encouraged all Somalis to participate in the 2016 electoral process and hoped that free and fair elections are conducted within the timelines;

7. Commended the progress made in the state formation of the country and encouraged the swift completion of Hiraan and Middle Shabelle State formation;

8. Requested the African Union Mission in Somalia (AMISOM) to provide all necessary security to the electoral process;

9. Condemned the recent Al Shabaab attack against the AMISOM and the Somali National Army (SNA) in Somalia and their continued attacks against the civilian population;

10.Called upon AMISOM troops and the Somalia Security Forces to expand their operations, deal with evolving terror threats and immediately recover the remaining areas controlled by Al Shabaab;

11.Called for the establishment of an economic recovery fund with support from the region and the international community;

12.Urged the international community to support the FGS development plans and programs, especially infrastructure connectivity and social services through the IGAD Third-Party Financing Mechanism and any other bilateral arrangements;

13.Reaffirmed the strong solidarity among IGAD Member States and their commitment to continue supporting the stability of Somalia;

14.Expressed appreciation for international partners and organizations that are currently providing financial, material and technical assistance to the FGS;

15.Strongly condemned and deplored those seeking to destabilize the security, peace and stability of the country, and urges all Somali actors to embrace the process of bringing back normalcy to the country;

16.Encouraged the voluntary return of all Somali refugees to participate in the national building efforts;

17.Committed to collectively address refugee situation in the region, as well as convene a special summit on durable solutions and effective reintegration of returnees in the country;

18.Requested the IGAD Chair to bring to the attention of the World Humanitarian Conference on the sidelines of the UN General Assembly in New York the dire need for humanitarian intervention in the region;

19.Commended the remarkable efforts of the IGAD Secretariat and its Somalia Facilitation Office towards peace and stability in the country;

20.Directed the IGAD Council of Ministers to convene before end of the year to dispose off pending policy and administrative issues at the IGAD Secretariat;

21.Expressed its appreciation to the Government and the People of Somalia for hosting this Extra-Ordinary Session; and

22.Decided to remain seized of the matter.