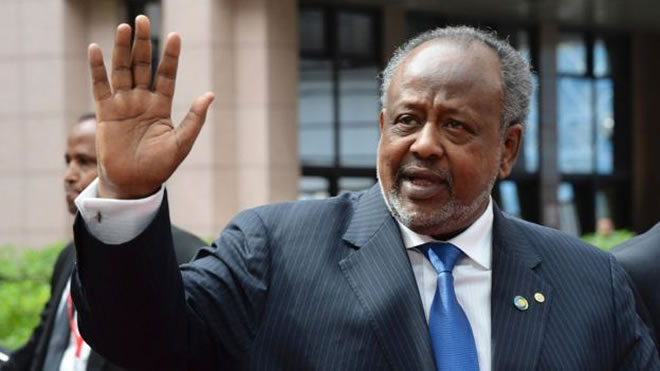 DJIBOUTI (HAN) June 16.2016. Public Diplomacy & Regional Security News. The opposition in Djibouti is warning that restless young people could swell the ranks of a growing band of rebels in the north of the country if President Ismail Omar Guelleh fails to quickly address social and economic problems that are affecting the country’s youth.

“We in the opposition have tried to keep things under control in the interest of the people but we don’t know what the future holds for the country.”

The source accused President Guelleh of “silencing the people and keeping them in poverty”.

He added: “There is very little freedom of movement for members of the opposition.

“In reality there is a de facto state of emergency.

“It has not been proclaimed but it exists in practice.”

The government has spent close to $90 million over four years on a personal vendetta by President Guelleh against one of his former confidants, Abdourahman Boreh, through failed litigation in the UK courts.

The source said many Djiboutians were not confident about seeing political change through the ballot box.

“We as a peaceful opposition can do so much, but others will, frankly, take matters into their hands and that’s our fear.

“We are not for violence and we are not convinced that violence is the way to bring about change.

“But the youngsters are saying that they do not have any hope for peaceful change,” the source added.

Young people in Djibouti are suffering the brunt of a high unemployment rate of 60 per cent, which the opposition source said would play into the hands of extremists, warning that there could be a Somalia situation if things did not improve.

“If there is no hope for them, the issue of terrorism will not be far away because the conditions are ripe for this,” the source said,

“That’s what we are telling our international partners; that they should act before it is too late.

“What we badly need is a catalyst but Djibouti is not in the international limelight and that’s why the continued political repression and human rights violations are being ignored,” the source added.

The regime has been under intense pressure from its opponents since the presidential election in April, which saw President Guelleh returned to power for a controversial fourth five-year term.

Opposition leaders say they reject the result, citing fraud while the African Union and the Inter-Governmental Authority on Development (IGAD) deem it to be “credible” and “fair”. However, the situation is currently tense and has resulted in some dissent, with the opposition questioning why Western governments are failing to apply more pressure on the regime.

The opposition source said: “The West is not doing enough even though the harassment of opponents by the government is so clear.

“For the regime, as long as there are no international sanctions against it, the harassment will continue.”

The source raised the issue of the growing Chinese presence in Djibouti where Beijing has been pumping in money for major infrastructure projects.

The source said that these loans were not “transparent and there is much corruption”.

“Those who work with or for the [foreign] military bases in Djibouti are members of the regime,” the source explained

“You can’t have contracts with these bases without the support of the regime.”

Not surprisingly the Chinese have been expressing concern about the country’s capacity to repay the loans from Beijing.

In these straitened times for Djibouti, the World Bank has stepped in to provide additional finances to help the country “address vulnerability and improve service delivery”.

The Bank approved a total of $31 million in loans for three social projects.

Djibouti is also benefiting from the $175 million that the Bank has provided to deal with the refugee crisis in the Horn of Africa, which hosts 9.5 million forcibly displaced people, with three million classified as refugees.

In Djibouti refugees are beginning to arrive in large numbers.