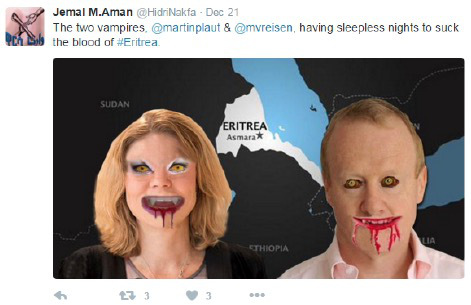 NAIROBI (HAN) February 28, 2016 – Public Diplomacy and Regional Stability Initiatives News. By:Martin Plaut . A quiet, but well orchestrated, campaign is under way in the Netherlands. The Eritrean government is attempting to use the Dutch courts to silence its critics. No fewer than seven court cases have been opened against liberal newspapers, a radio station, a website, the Dutch government and one of the authors of this article – an academic.

Those involved are leaders of the youth wing of Eritrea’s ruling party – the Young People’s Front for Democracy and Justice (YPFDJ). But the campaigning is guided by senior government officials, including some close to President Isaias Afewerki.

The first to face the courts was Mirjam van Reisen, a Professor of International Relations at the University of Tilburg. An adviser to the European Union and the UN, Professor van Reisen is well-respected as an Eritrean expert.

In May 2015 a Dutch website, Oneworld.nl published an article alleging that some of the interpreters working for the Dutch immigration service were linked to the Eritrean regime.

They were hired to translate sensitive conversations between officials and refugees who were seeking asylum. Many of the refugees were fleeing Eritrean state repression and this was contrary to the regulations governing the immigration service. This stated that: ‘Neither you, nor your family in first or second degree are (or have been) involved with a regime with which foreigners claim to have experienced problems.’

Professor van Reisen was quoted as saying how worrying she found this. ‘Many Eritrean asylum seekers are immensely traumatised,’ she said.

‘When they discover that the interpreters are linked to the regime they fled from, this undermines their trust in protection by the Dutch authorities. In addition, it arouses fear. The interpreters get sensitive information about the asylum seekers through the interviews that they translate. With this information, they may threaten or extort these refugees. Relatives in Eritrea may also be threatened.’

The article identified the brother and sister of the president of the Youth wing of the ruling party as being among those employed as translators. ‘The interpretors are linked to the centre of the intelligence in the Netherlands and in Europe’, Professor van Reisen is quoted as saying.

On 23 May 2015 the president of the YPFDJ, Meseret Bahlbi, went to a police station and filed a charge of libel and slander. He asked for an apology, correction and a fine of a minimum of € 25.000.

The case came to court on 10 February and – to the immense relief of Professor van Reisen – the accusation was rejected. Her right, as an academic, to freedom of speech, was upheld.

The judge found that the YPFDJ receives indeed instructions from the ruling party, that it supports the Eritrean regime and that its goals, and that of its members, are to ‘act as informants for (the embassies of) the regime in Eritrea’. Perhaps at least as damaging for the Eritrean government was an admission by Meseret Bahlbi that the regime engages in torture.

Although this case has backfired, others are still being pursued.

One is against the Dutch migration agency. On 24 February the Dutch Court decided on the case brought by Bahlbi’s siblings, and once again found against them.

There are two cases against the Volkskrant – the equivalent of the Guardian newspaper. The paper was in court on 24 February and judgement will be delivered on 11 March.

And there are four other cases against media organisation, including Oneworld and Radio Argos.

This campaign has been accompanied by vociferous attacks on social media. Van Reisen has been physically threatened. And both she and I have been have been demonised, quite literally.

At one level these attacks are faintly amusing. But they are officially orchestrated by the regime.

‘We have to remember, always remember, that we have still enemies who plot on a daily basis,’ Yemane told the conference.

‘Enemies who don’t tire and don’t sleep, who try to bring our downfall….Therefore, our first objective – as YPFDJ and as Eritrean youth, and as community… the objective which still remains at the very top of the list, is to conclusively defeat this hostility hovering over of our nation. That remains the job.’

The United Nations has reported that the Eritrean government has an extensive network of agents that work for the regime worldwide. It has also imposed sanctions against the regime for sponsoring attacks on its opponents abroad.

In this context the Dutch campaign takes on a new, and more sinister, significance.