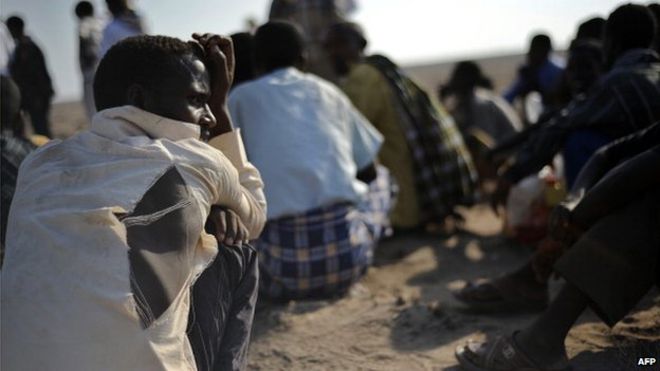 Fredericton (HAN) September 5.2016. Public Diplomacy & Regional Security News.BY: Fikru N. Gebrekidan. In recent weeks, following failure to contain the widespread civil disobedience in the country’s northwest, the government of Ethiopia has begun to show the symptoms of a state on the brink of genocide: routine killings of members of a targeted ethnic group, wholesale labeling of a people as chauvinists and a threat to national security, terrorization and intimidation, hyping up of jingoistic rhetoric, and openly invoking the specter of mass extermination. Whether at this point the Horn of Africa will be spared another round of a horrific tragedy, reminiscent of the 2004 Darfur, depends on how seriously the international community takes these latest developments and acts accordingly.

To give this concern further credibility, one may reflect on the nature of the Ethiopian politics. In theory, the government in Ethiopia since 1991 has been a coalition of ethnic parties: the Ethiopian Peoples Revolutionary Democratic Front. In reality, it is the ex-rebel group, the Tigrayan Peoples Liberation Front, that has been running the country. Although the northern province of Tigray makes up about six percent of the population, the TPLF has managed to stay in power through the classic dictum of divide-and-rule, especially by pitting against one another the two major groups: the Oromo and the Amhara. The fact that almost all the military generals share the same ethnic background has made it possible for the TPLF to maintain a monopolistic hold of power, not to mention the role of Western complicity in the name of anti-Shabab military alliance. If the TPLF were white, the international community would have long cried apartheid, racism, and crime against humanity. But this is a black-on-black oppression in one of the poorest countries, and Western diplomats have chosen to remain indifferent to human rights atrocities that would have been unacceptable elsewhere.

The reign of TPLF during the last 25 years has, indeed, been paved with a series of genocidal violence. To sample a couple of cases, on December 13, 2003, over 400 men, women, and children belonging to the Anuak, a small ethnic group in southwestern Ethiopia, were annihilated by federal troops in broad day light. The massacre has been declared a genocide by no lesser authority than Genocide Watch, and yet not a single individual has been charged for the crime. If anything, the government of the late Prime Minister Meles Zenawi grew more brazen by the experience. In the 2005 postelection crackdown of the main opposition party, Qinijit, in the capital city of Addis Ababa alone government forces shot and killed 193 protesters, wounded over 700, and sent tens of thousands of youths into concentration camps. In a rare manifestation of judicial courage, the independent inquiry commission found the government accountable for the massacre, but the only person who paid a price was the chair of the inquiry commission, who was forced into exile for fear of his life.

Since the protest against the systematic removal of Oromo farmers from their ancestral homesteads began nine months ago, soldiers have killed several hundreds and imprisoned thousands. Most of the victims were elementary and secondary school Oromo children from the age of seven and up, many shot by specially trained snipers in the hope of terrorizing their communities to submission. In recent weeks, the killing spree has extended to the Amhara in the northwest, the worst instance being the August 6 massacre of 49 protesters in the city of Bahr Dar. Causes for the Amhara unrest are the same as those for the Oromo: rejection of Tigrayan apartheid, unresolved questions of identity, and resentment to government’s unfettered land-grab policy.

As the civil disobedience continues to spread, government response has been more of the same: employment of additional military units, indiscriminate firing into demonstrators, using of snipers to target youth activists, and the resort to inflammatory and polarizing language. In the sharpest escalation yet, Prime Minister Hailemariam Desalegn has authorized the use of “all available force,” and “without a show of mercy,” to restore “law and order” in the Amhara region. Since that declaration of war a few days ago, government troops not native to the Amhara region have already launched an invasion, killing at least 26 residents in the small town of Amba Giorgis and forcing most of the able-bodied to flee into surrounding forests. The horror will only get worse as the army tries to crush the unrest through brute force, action that might in turn destroy what little legitimacy TPLF enjoys outside its ethnic power base.

Finally, it is possible that the army will temporarily contain the unrest by turning towns and villages into mass graves. Or, after regaining control of the major towns, the government may opt for a calculated and protracted war of attrition: a silent genocide. Millions of Ethiopians have enough reasons to be fearful and anxious either way. The international community should take seriously what TPLF’s leaders themselves have repeatedly said in the past, namely of their readiness to resort to any degree of violence, in order to ensure their stay in power.