NAIROBI (HAN) March 13. 2016. Public Diplomacy & Regional Security News. By Berhane Woldu. To build a Nation State in Africa has done little advancement. The continuum has been endless conflict, bloodshed and the misery that it has brought on the innocent population. This is true in today’s Ethiopia. Abyssinians with expansion subjugated the indigenous population making them subject of the empire. Empire building in Ethiopia started with Emperor Tewodros of Gonder who ended the Ages of princes and ruled from 1855 to 1868 succeeded by Emperor Yohannes IV of Tigraye; followed by Menelik of Shoa who started the invasion to the south specifically the Oromo.

According to Bahru Zewde Economic origins of the state of Ethiopia; King of Shoa Menelik in 1886 conquered the western section from Blue Nile River to Illubabor crossed over the Awash River and invaded the southern plateau of Arsi Oromo and the city of Harar. Abyssinian expansion was interrupted by the Italian invasion in 1895. Menelik supported by peasant army and three Oromo contingents defeated the Italians in 1896. The expansion resumed furiously and the subjugation of Oromo was completed with Kaffa falling in 1897. Abyssinians moved to the lowlands and advanced to the west Beni Shangul Gumuz Southwest to Gambella and northern shore of Lake Turkana South Boranaland and then annexed the Ogaden in the southeast securing the boundary Ethiopia has today. The Ethiopian colonial expansion resulted in mass killings, destruction, looting, enslavement and genocide. Menelik died in 1913 leaving one daughter who later became Queen Zewditu. Her son Lij –Yasue who was heir to the throne son of King Mikael of the Wollo Oromo never succeeded to the throne due to his Oromo ancestry. Ras Tafari Makonnen who had hatched a conspiracy to deprive Lij Yasue became King of Kings Imperial ruler of Ethiopia in 1930 taking the throne name Haile Selassie. King Haile Selassie with European advisors was able to some extent to modernize Ethiopia. After the Italians were ousted in 1943 the Amhara regime was challenged by their Abyssinian brothers. Tigray nobles’ waged fierce battles lasting several months with heavy casualties adding Tigray resentment against the Amhara regime. Ethiopia was rearranged geographically into thirteen provinces Arsi, Bale, Begemdior, Gojjam, Gemu Gofa, Hararge, Illubabor, Kaffa, Shoa, Sidamo, Tigray, Wallega and Wollo. Spencer: Ethiopia at bay states; In 1943 Emperor Haile Selassie centralizing his power formed Councils of Ministers who were people from Shoa as advisors to the Throne. Laws and practice were influenced by the Orthodox Christian Churches of Abyssinia hence the Muslim Community which constitutes 50 % of the population were never mentioned, Penal Code, Courts Proclamation of 1962 and Procedural Code of 1965 actually nullified Muslim customary laws. In 1955 the Constitution was revised giving Emperor Haile Selassie the “Sovereignty of the Empire’. Emperor Haile Selassie feared ethnic and cultural diversity of the periphery subject of the Empire. The Emperor imposed homogenization cultural and linguistic unification. To ascertain National Integration Amharigna the dominant language was used and the indigenous to become Amhara. Amharigna “a written language, Amhara a superior religion and superior customs” rejected the other languages and culture as undignified. The peripheries were governed by the “neftegna-gabbar” system; supervised by “balabbat” and resources were extracted from the periphery to the Abyssinians. Abyssinian Center-periphery dynamics remained stable. Haile Selassie modernized the state structure making it an apparatus for peripheries control and resource extraction promoting socio-economic changes bringing highland periphery into integration. The center domination and forced cultural assimilation was resented and become a reason for forceful opposition leading to reminiscent revolution. 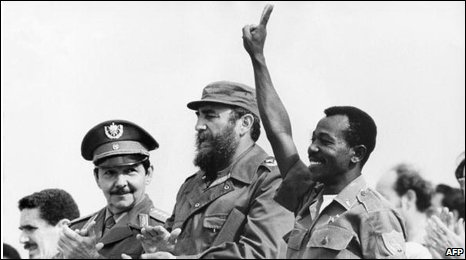 The 1974 Revolution dismayed the country and swept away the material and social foundation of the Emperor’s regime replacing it with a socialist ideology. Ethiopian nationalism equality among all nationalities and land to the teller was the revolution’s driving force with mottoes of “Unity and Ethiopia First”. The Military leaders “Derge” restoring control over the periphery was a priority in re-building the Nation State. Ethiopia Tikdem meant to modernize the imperial provinces by replacing imperial officialdom by new blood educated Veterans of the Student Movement later to be replaced by political cadres who reached deeper into the rural society creating the Kebele as State administration. The new classes of state administrators were heterogeneous; Abyssinian’s remained dominant, supplemented by recruitment from the highland and lowland periphery and with the beginnings of Muslim participation. Regional autonomy for nationalities “sprit of Socialism” was promises made by the Derge; the Amharistaion of the peripheries was not opposed. Military service, the state education system urban growth and economic activity strengthened “Amharigna as a lingua franca” supported by internal migration demographic change and villagisation scheme brought some integration. Nevertheless no concessions were made to the “Nationality question” instead the Derge saw centralized state as the guarantor of sovereignty. Which gave way to insurgent movements Tigraye (TPLF), Oromo, (OLF,SALF), Sidama (SLM), Afar (ALF) Somalia (ONLF,WSLF, SALF) as a Nationalist movements which brought about rupture and the end of the Marxist Military rule.
The TPLF after converting its military prisoners of different nationalities into Nationalist movement formed the EPRDF which gave it legitimacy as the redeemer of Ethiopia. The EPRDF marched deep into Oromo territory denying the OLF any territorial gain and marched into Addis Ababa invited all nationalities to a conference it was then agreed that Ethiopia will be governed as a Federal State where by nationalities will administer their own affair within their defined border. Political mobilization and reconstruction was underway to replace the Derge remnants and secure control. Prisoners of war who were recruited and trained as EPRDF cadre returned to their ancestral home set up ethnic political affiliates and become the administrators. Redesigning the Nation administration based on nationality Regional Self-Government divided into ethnic units The EPRDF encouraged ethnic fission. Basing language, identity and a common psychological make –up EPRDF divided Ethiopia into fourteen regions. Putting Amharigna speaking into one region, Oromo, Afar, and Somali each have their own region. None Oromo in the south were divided into five different regions. The Gambella and Beni-Shangul district upgraded as regions with no official regional map issued. A large number of Amhara, Oromo and Gurage people displaced now live out of their region. Even though the regions were supposedly granted full measure of self-government region balance did not change. The center was dominant. The Central government took in 84% of all domestic revenue and 91% aggregate revenue and foreign aid. The regions are deficit-redden and with no hope of self-sufficiency or development. To make things worse the EPRDF government stared to lease low-land peripheries for cheap at $200.00/per hectare, free ground water, cheap labour, duty free export and other incentives displacing population and land being managed by the Center. EPRDF controlled conglomerates became biggest investors in the country, amassing manufacturing assets, urban construction sector, financial and service enterprises dominate the economy. The EPRDF army became the national defense force and key TPLF figures became the power holders of the upper echelon of the military and security posts. TPLF was the undisputed first among equals holder of key posts in the party and the state under Federalism. The Abyssinian Tigray elite continue to rule giving the administrative job to the elite in the periphery with no political integration. Ethiopian Nationalist opposed to Federalism became force of opposition creating split in the Abyssinians and the political process negated the promise of equitable center/periphery power sharing exposing the true colure of EPRDF. EPRDF is not ready to accept equitable power sharing with the periphery and to equitably distribute national resources. The process of integration in the Lowland peripheries lags many years behind and exploration of indigenous resources is a destabilizing factor especially in Somali.

Federalism was the savior to the widespread prolonged and violent political conflict that had brought Ethiopia to disintegrate and crumple. To the contrary EPRDF’s federalism; its land policy has preserved the supremacy of the center with the same arrangement “corps of center and peripheral elite.” Denial of political integration has become the cause of mushrooming Nationalist movements. The EPRDF’s policy of land confiscation of “highland periphery” awarding to the land starved Abyssinian is the major cause of the present upheavals in the Oromo region. EPRDF Abyssinians have not departed from the past like their fathers they are the Imperial rulers subjugating the Highland and lowland peripheries the end result being the third rapture that will disintegrate Ethiopia.