Home Eritrea Made it to Eritrea 54/54 African Countries 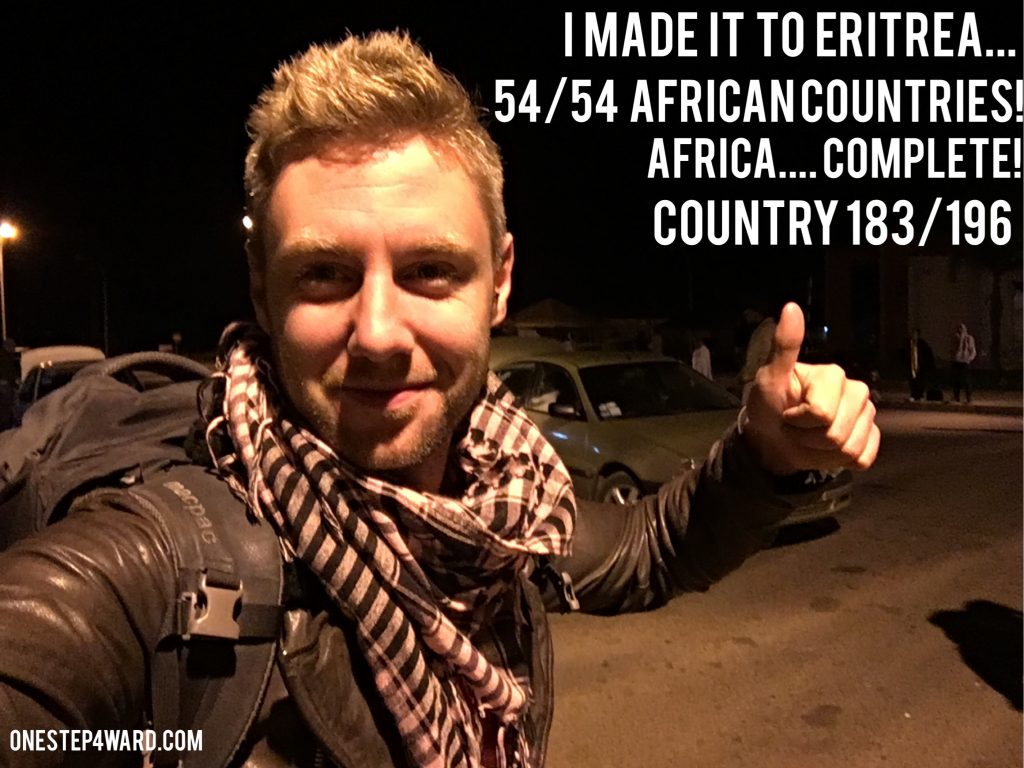 Eritrea is the sort of country most people have never even heard of, let alone can put it on a map, so let me help out a second! It’s a small country in East Africa, wedged between Sudan, Ethiopia, Djibouti and the Red Sea (check out the google map below). It was the 183th country I visited, and due to visa restrictions with onward countries I only got to spend 3 days in and around the Capital, Asmara. From what I saw, the country is beautiful, super friendly and has a lot to offer. Also, it’s untouched by tourism so it’s as ‘real’ as experience as you’ll find anywhere, read on below…

HOW TO GET TO ERITREA

Eritrea, infamously, is one of the most difficult countries in the world to visit. The visa is notoriously difficult and get take months of months of waiting in your home country, only to be rejected anyway. On my journey to every country in the world, I was well aware that this could prove tricky. And then the breakthrough.

My buddy Gareth, of the North Korean tour company Young Pioneer Tours, has a friend who runs tours in Eritrea. Tekeste, an older local man born and bred in Eritrea’s charming capital, Asmara, can organise visas and trips super easily. I was sceptical, but a couple of emails later, a few days and not even a visit to an embassy, he had organised my visa and all I had to do was fly to the country with a printer piece of paper, pay $30 at the airport and boom, suddenly one of the hardest countries in the world to visit became as easy as visiting Thailand. If anyone wants Tekeste’s email and tour company by the way, it’s here:

Eritea on google maps (sorry about the stars, they are my hotels from my last year’s trips!):

Eritrea is a former colony of Italy, so all the existing architecture echoes that of Italy from the early twentieth century. Not only that, there are gelato and pizzerias are found on many street corners, old school Italian movie halls with traditional east African espressos on offer. The high society go to congregate at lunch times, so it’s a great experience to join them and mingle over a $0.50 coffee! Tekeste and me at a coffee shop

Within Asmara then there are enough things to see and do to fill a full day or 2 lazy days (my preference!). Walking down the mile or so of ‘Independence Avenue’ is a gorgeous way to spend an hour or two, stopping off for yet more icecream and another deliciously cheap espresso! The local markets are really interesting, but my favourite thing to do in Asmara was to climb the hill to the local Mosque and see the views of the whole city. Due to the ongoing wars with Ethiopia, Eritrea has managed to horde quite a lot of artillerary. With that in mind then I stumbled across something pretty cool, if a little morbid, as I drove around Asmara. It’s not in any guidebooks, or tourist schedules but make sure you head over to the ‘Tank graveyard’ when you’re in town, I’ve never seen anything quite like it! After a couple of days in Asmara, Tekeste and I ventured out of the city to see some of the spectacular views. Within 2 hours of Asmara, you’re free to travel around without any additional permits, but if you want to go any further you need to pre-register and it turns into quite a bureaucratic nightmare. Eritrea is clearly a beautiful country, but with land borders to two of it’s 3 neighboring countries closed, a refugee crisis and a one-party state, it’s not without its serious problems. For foreigners it’s SUPER safe, nothing to worry about there, so I’d encourage everyone to go and visit a country where only a handful of people visit each year. The country is gripped by genuine poverty, so by all means please come, support the local business, the local tour companies and see some of the warmest smiles and spectacular scenery all without the visa hassles that I had heard so much about.