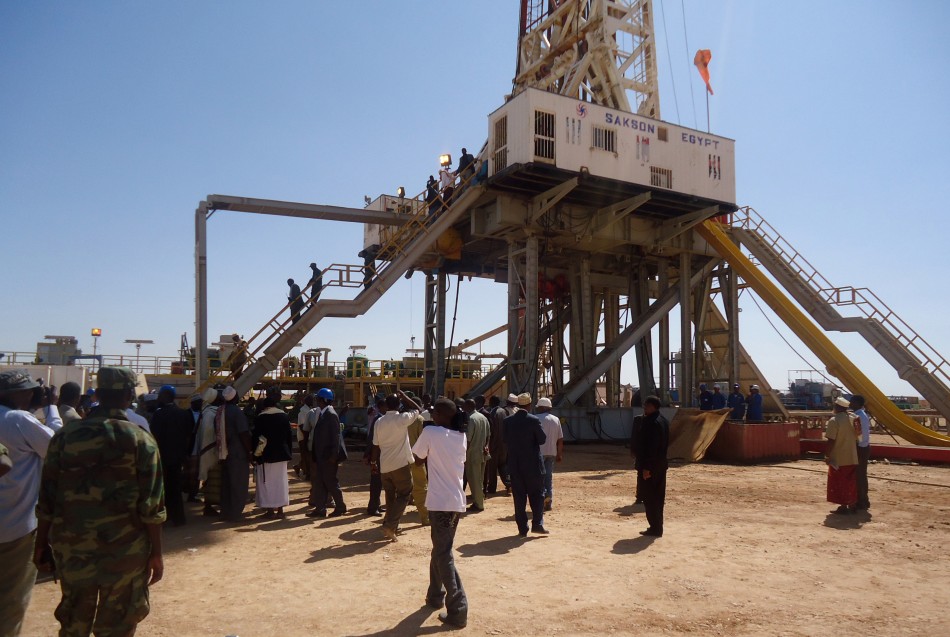 Promising test wells, seismic and gravimetric surveys, actual oil seeps, and the geological resemblance to oil-rich Yemen strongly indicate the presence of oil in commercial quantities in Somalia*.[1] However, Somalia is significantly underexplored and the region as a whole is considered by many as one of the last remaining oil frontiers in Africa.

Historically, oil exploration in Somalia dates back to 1948 but due to it’s volatile political and security environment Somalia was still underexplored when, in the late 1980s, several major oil companies signed concession agreements with the Siyaad Barre military regime. The outbreak of the civil war and the collapse of the regime led oil companies to declare force majeure and abandon exploration activities overnight.[2]

Though most of Somalia is still characterised by clan strife and the al-Shabaab insurgency, the combination of the above-mentioned promising indicators, the establishment of the AU-backed Federal Government of Somalia (FGS) in Mogadishu, and the relatively stable governments in Somaliland and Puntland, have resulted in a renewed interest in Somali oil exploration.[3]

The article will through selected examples illustrate how this oil exploration is exacerbating and complicating already existing conflicts and highlight possible mitigating policy responses.

The overarching issue related to oil exploration in the territory internationally recognised as Somalia, is the question of rightful ownership of natural resources. With reference to Article 7 in the Petroleum Law (2008) stating that: ‘(…) all agreements pertaining to petroleum that were signed after 1991 with the entities purporting to be governments of all or any part of Somalia are considered non valid agreements’ the FGS claims a legal right to all natural resources in Somalia.[4]This claim is, however, contradicted by Somalia’s Provisional Constitution (2012), which provides substantial autonomy for regional governments to enter into commercial agreements with international oil companies.[5] In this way, deals are continuously made with reference to incompatible legal documents, which complicate the possibility of finding long-lasting solutions to the issue of ownership. Furthermore, oil companies become direct parties to the conflict by increasing tensions between both the regional governments of Somaliland and Puntland, but also concurrently between these entities and the FGS

An illustrative example of the complicated web of overlapping concession agreements is the block ‘SL18’ covering parts of the Sool and Sanaag regions in the borderlands of Somaliland and Puntland. In SL18 the oil companies DNO and Horn Petroleum have both signed concession agreements with Somaliland and Puntland, respectively. These agreements pose potential significant contributions to the respective budgets of Somaliland and Puntland, which raise the stakes of controlling the disputed area. Following the agreement with Horn Petroleum, political tensions arose, which led Horn Petroleum to inform the government of Puntland that it would reduce its presence in the area and requested Puntland for a two-year extension of the exploration period in order for the: ‘(…) political challenges to be resolved’.[6] While this initiative might reduce the potential for current on-site clashes, it certainly puts pressure on Puntland to find a solution – political or not.

Concurrently, the concession right to SL18 is at the forefront of the above-mentioned legal dispute as SL18 is also claimed by Shell and ConocoPhillips, which both have agreements with the FGS currently on hold due to the 1991 force majeure.[7] To further complicate the situation, SL18 is situated in the territory also claimed by the vaguely defined self-declared Dhulbahante based ‘Khaatumo State’.[8] While SL18 might be a crude example of the complicated web of overlapping concessions in Somalia, similar conflicts exist in block SL6, SL7, SL9, SL10A, SL10B, SL12, SL13, SL14, and SL19 in the Somaliland-Puntland area, in off- and onshore blocks in Puntland and Galmudug, and in L5, L21, L22, L23, L24, L25 and L26 between Kenya and the FGS off the Somali-Kenyan coast.[9]

In relation to the conflict between Somaliland and Puntland it is, however, important to keep in mind, that the hostility between the two is nowhere only created by the current oil exploration, as historic issues related to e.g. access to grazing land and water as well as border demarcation have existed for decades. However, the presence of oil companies is exacerbating, accelerating, and reigniting already existing conflicts, as the establishment of the two oil protection units exemplifies, which will be described further below.

Oil exploration in Somalia is not only a matter of legal disagreements as several oil-related clashes attest. One example is in Sool region (disputed between Somaliland and Puntland), where a clan militia ambushed a DNO exploration team in 2014. The exploration team fled to Hargeisa without any casualties.[10]

During another incident, in Puntland in 2006, exploration activities of Range Resources resulted in the intensification of a clan dispute between Warsangeli and Puntland authorities (Majerteen) in the town Majihan south of Bosaaso. In this case Puntland’s military, which supposedly was ordered to protect the equipment of Range Resources, in an alliance with local Majerteen elders, killed more than 30 people and provoked the creation of a new Warsangeli militia led by Sheikh Mohamed Said Atom. A militia, that a few years later swore allegiance to al-Shabaab and today is defending an al-Shabaab stronghold in the Golis Mountains west of Bosaaso.[11]

In the context of the above-mentioned dispute, the letter dated 10 September 2015 from the Puntland authorities to the oil company Spectrum ASA is alarming.[12] In this missive the director general of the Puntland Petroleum and Minerals Agency, Issa Mohamud Farah, denounces the newly signed deal between Spectrum and the FGS covering parts of Puntland’s claimed offshore territory and states that any Spectrum vessels in Puntland territory will be seized. A similar threat was directed at the Chinese BGP Inc. and its offshore seismic activities.[13] This practice is not unfamiliar to Puntland’s Maritime Police, as it has previously detained foreign vessels accused of illegal fishing.[14]

As a response to the security issues arising from the interaction with the local communities, specially trained oil security forces have been established – the OPU in Somaliland and the ESU in Puntland[15] According to senior internal security coordinator and head of the Oil Protection Unit at the Interior Ministry of the Republic of Somaliland, Ahmed Kochin** the OPU was established in order to assure the safety of the international oil workers. Notwithstanding the motive of establishing the units, it is self-evident that the forces can be used for other purposes, including as means to strengthen territorial defence against hostile neighbours and militias in the contested borderlands.

Concurrently, chief of staff of the Presidency of Puntland, Deeq Yusuf, refers to Somaliland’s OPU as: ‘(…) part of the continued aggression and clan expansion of Somaliland against the territory and people of Puntland’.[16] The consequence is that the establishment of oil protection units, which supposedly are to create and uphold stability, end up having the opposite effect. These units become a conflict-escalating factor because oil companies are now to be escorted by heavily armed personnel, which can provoke violent clashes, especially in disputed areas. Furthermore, the privatisation of security reduces transparency, prompts questions of affiliation and loyalty of security forces and the units become dangerously powerful parties to the on-going conflicts.

It is worth noting that both the OPU and the ESU allegedly are funded directly by foreign oil companies. In Somaliland Genel Energy is supposedly funding the OPU, and Canmex/Erin Energy is perceived to pay monthly salaries to the ESU in Puntland.[17]

Only limited research has been conducted on emerging oil producers and the unique challenges associated with this initial phase. What is especially interesting in the Somali case –as our research shows – is that prior to any oil exploitation, and even prior to any commercial oil discoveries, several of the negative dynamics associated with the so-called resource curse are at play. More concretely, our research shows that the politics of oil in Somalia have already led to cases of corruption*** and examples of diversion of funds, forced evictions, diplomatic crises, legal disputes, clan tensions, and border disputes – not to mention the deaths of at least 30 people in Puntland directly related to oil exploration. The mere myth of oil unleashes forces and reactions that, even before exploitation, influence politics in general and conflict dynamics at all political levels across Somalia.

Despite the drop in oil prices since mid-2014 and the volatile security environment, the extent of oil exploration across Somalia remains significant. This indicates that conflict is likely to become increasingly evident in the future development of Somalia, especially if oil in commercial quantities is discovered. It is therefore relevant to ask how these conflict trajectories can be avoided.

If the extensive exploration continues in Somalia and runs parallel to the creation of political settlements, the state- and peacebuilding processes will constantly be affected by developments from the on-going exploration and it will potentially affect negotiating positions. A way forward is therefore to temporarily suspend the exploration activities and focus on creating solid political solutions to the territorial, clan-related disputes and find legal solutions concerning ownership and distribution of natural resources. While this is of course immensely difficult in Somalia, it is problematic that the actual process is roughly done the other way around. When the exact locations of oil deposits are discovered, the possibility of finding political and non-violent solutions to decade-long disputes will become more difficult as every actor, be they oil companies, political entities, local clans or the FGS, will be willing to take necessary means to secure the vital assets. Ironically, the low oil price may benefit the Somali situation, as oil activities might be postponed until higher prices emerge, providing more time to reach political settlements.

Other key aspects that can work to reduce the possibility of conflict and secure a more sustainable solution are the inclusion of the local communities in the decision-making process and, concurrently, the management of public expectations. Through interviews and general discussions in both Addis Ababa and Hargeisa in April 2015 it became clear that local populations do not necessarily oppose oil exploration as long as oil is used to improve their living conditions. If oil is then found and it does not benefit the people, especially those living in proximity to future exploitation sites, it will create dissatisfaction and likely spur violent conflict due to the harsh living conditions across Somalia. It is therefore crucial that the local communities are included comprehensively into and informed about all stages of the politics of oil.

Jakob Grandjean Bamberger is a researcher specializing on the Horn of Africa. He has a MSc in Global Studies. He is currently working at the Danish Accreditation Institution and can be reached at Jakob.bamberger@gmail.com.

Kristian Skovsted is a researcher specializing on the Horn of Africa. He has a MSc in Global Studies. He is currently working as Africa advisor at the Danish Immigration Service. He can be reached at Kri.skovsted@gmail.com.

This article is based on research available in greater detail through the Danish Institute for International Studies (DIIS).

*‘Somalia’ is here also referring to both Puntland and Somaliland.

[2] Ali, “Oil Geopolitics in the Horn of Africa: Somaliland DNO Oil Deal Adds Fuel to the Conflict in North Somalia”.

[4] Bamberger, and Skovsted, “Concessions and Conflicts: Mapping Oil Exploration in Somalia and Ethiopia”. 5-9.