Home frontpage OPINON: Obama’s Ethiopia in Tatters and in Danger 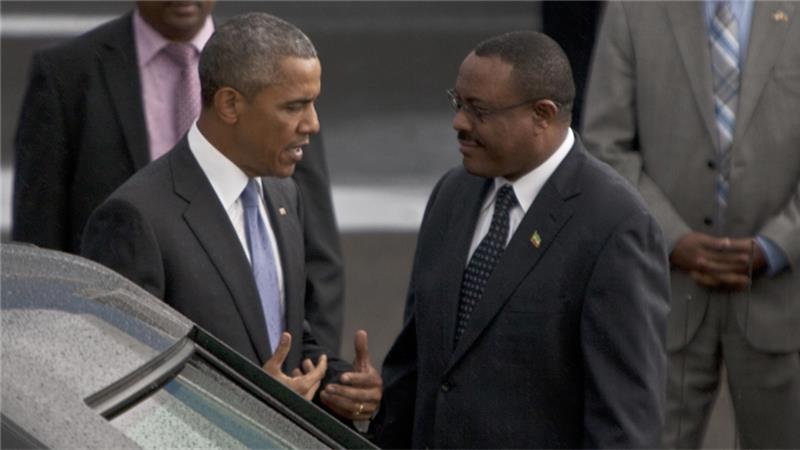 BY: Amanuel Biedemariam. Washington is a key ally and number one supporter of the minority regime ruling Ethiopia with brute force.

Following the death of the late dictator Prime Minister Meles Zenawi, the Obama administration was intent on ensuring continuity by giving full support to Hailemariam Desalegn. On April 24, 2012, President Barack Obama called Desalegn personally to advertise his unequivocal support, to assure world leaders that Washington is confident and to ward-off internal challenges.

Meles Zenawi was the perfect agent that funneled their agendas. His death was personal for US officials as he was close confidant and faithful agent. A New York Times op-ed described Susan Rice’s eulogy at Zenawi’s funeral as follows,

“ON Sept. 2, Ambassador Susan E. Rice delivered a eulogy for a man she called “a true friend to me.” Before thousands of mourners and more than 20 African heads of state in Addis Ababa, Ethiopia, Ms. Rice, the United States’ representative to the United Nations, lauded the country’s late prime minister, Meles Zenawi, She called him “brilliant” — “a son of Ethiopia and a father to its rebirth.”

“Few eulogies give a nuanced account of the decedent’s life, but the speech was part of a disturbing pattern for an official who could become President Obama’s next secretary of state. During her career, she has shown a surprising and unsettling sympathy for Africa’s despots.’’
The New York Times is being kind to Rice. Susan Rice’s hand is soaked with blood in Rwanda, Eritrea Ethiopia war and Libya to mention some.

Due to her past engagement with Africa, Rice can act as expert and influence African matters particularly Ethiopia based on her narrow outlook that has been deadly to Africa for decades.
The Obama administration was and remains the number supporter of a regime that claimed to have won 100% of votes and won the 2015 election. The people of Ethiopia were enraged when Susan Rice laughed at Ethiopia’s regime 100% election victory claim and called it democratic.

This clearly demonstrates that Washington policy for the region has been directed through the prism of the Ethiopian regime at the expense the people.

The problem is that the Ethiopian regime worked against the interest of the people of Ethiopia and the region. As a result, the people of Ethiopia have been campaigning and lobbying Washington to change approach, denounce the atrocities, urge the regime to be accountable to the people and hold the regime accountable for its actions to no avail. Instead, Washington kept parroting the regime’s false claims of progress, stability and democratic advances to the detriment of the future of Ethiopia and the region
.
Ethiopia in Tatters and in Danger of Civil War
Where is Ethiopia today? Ethiopia is on a verge of civil war and ready to collapse. And the template for the breakup of the country was set by Tigray People’s Liberation Front (TPLF). When TPLF took power in 1991, the first major objective was to write a constitution that divided Ethiopia based on ethnicity. The constitution, Article 39, goes further to give rights to any of the ethnic groups the right to Self-Determination to the point of independence.

The complications arose when the minority regime from Tigray (region that represent 6% of the entire Ethiopian population) asserted control over the rest of Ethiopia’s 90 million people for it created unsustainable imbalance to the detriment of the future of the country.

The Tigrayan dominated minority regime controls the military, the economy, the political power backed with full diplomatic support from the US and EU. The US and EU promote and protect the regime from international scrutiny for its human rights abuses.

The TPLF and its surrogates are the number one investors inside Ethiopia. Ill-gotten aid money, Ethiopia’s revenue streams and international development assistance are diverted to benefit the regime and use the moneys and resources to control the nation. Few from the clique control the vast riches of the country and the regime has investments in Oromia, Gambela, Ogaden, Afar, Amhara and all over Ethiopia.

They control Ethiopia with brutality that is uncharacteristic of the cultures in the region. They have committed genocides in Gambela, Ogaden, Amhara, Benishangul and other places. They are committing atrocities with impunity while Washington officials and EU were being made aware every step of the way. Ethiopians have been campaigning to draw attention with demonstrations and other campaigns for over 20 years.

After successive rigged elections, after countless peaceful demonstrations that were met with brute force with the regime’s forces directly shooting at innocent unarmed demonstrators, after thousands of decenters and opposition leaders got jailed and no one stood for them; they gave up on the international community. As a result Ethiopians are taking up arms everywhere to defend their lives and livelihood.

The last five months the Oromia region was in revolt and over the last three weeks the people of Gondar in the Amhara region started to resist. These are locals arming and organizing as militias to protect themselves from the regime’s brute forces.

Up until now the minority regime’s stronghold Tigray region was untouched as the revolts were further from its boundaries. The revolt in Gondar brings totally different dimension to the overall resistance taking place all over Ethiopia.

Tigray is bordered by Eritrea in the North, (a country at war with the minority regime) Amhara in the South and Afar in the East and Sudan in the West. In other words Tigray is surrounded by regions that the TPLF oppressed and regions that are fighting with the TPLF because TPLF took their fertile lands and forcefully changed the maps of the regions and forced the people to live as Tigrayans. The people of Tigray enjoyed free access to Eritrea’s ports until the TPLF ignited war, occupied sovereign Eritrean territories, declared No War No Peace asymmetric warfare, and waged regime change campaign.

As a result the people of Tigray are completely isolated and surrounded. All goods that Tigray imports must pass through Amhara, Afar regions, Sudan or Eritrea. All these areas are hostile to the regime except Sudan. Gondar is a lifeline that the people of Tigray count-on because Tigray is connected to Ethiopia via Gondar.

This is what Genocide Watch, an organization based in Washington DC has been warning. Dr. Gregory Stanton of Genocide Watch has been warning the international community by writing letters to the State Department, waging campaigns to educate people and placed Ethiopia in Stage 6 which is countries that are second-highest level for risk of genocide.

He is concerned for the people of Tigray because the minority regime is looting Ethiopia in the name of Tigray. He is afraid that Ethiopia can resent Tigrayans and the backlash could become deadly. The longer the regime stays in power the worse the situations all across Ethiopia will become and it will be hard for Ethiopia to stand as one.

These are the realities in Ethiopia today. The Obama Administration with Susan Rice as a gatekeeper of African affairs is incapable to come up with coherent approach that can place Ethiopia in particular and the region as a whole on a positive direction. Instead, Washington is still pushing its outdated agendas to the detriment of Ethiopia and the region. Many have been urging this administration to change its direction to no avail. The stumbling block is Susan Rice.

Conclusion
All will not be lost if the Obama Administration wakes up and addresses the concern of the people of Ethiopia and the region and change direction completely by siding with the people and the rule of law. This requires a complete reversal of approach and strategy. It requires giving peace, stability and the future of the people a chance and priority. It requires rejecting the regime and fighting to give Ethiopians opportunity to create a legitimate government in exile. This could only be achieved in consultation and cooperation with Eritrea. That means Washington must change its approach with Eritrea as well. The window of opportunity is very limited. Therefore, let us hope better senses prevail to save Ethiopia. And also, lest not forget that the upcoming US presidential election could be decided in Virginia where sizeable Ethiopian population resides that could help determine the outcome.

Amanuel Biedemariam: Awetnayu@hotmail.com
* Any views expressed in this article are those of the author and not of GEESKA AFRIKA.