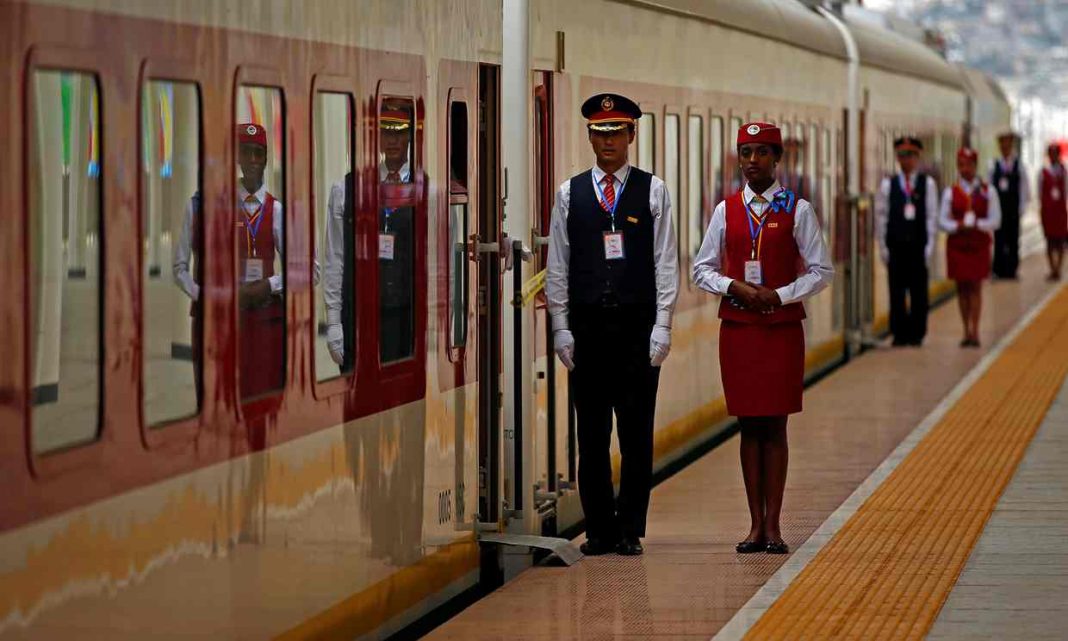 With Chinese conductors at the helm, a fleet of shiny new trains has begun plying a new route from the Ethiopian capital to Djibouti, in a major boost to both economies.

The 750km (460-mile) railway, built by two Chinese companies, which will link Addis Ababa to the Red Sea port city of Djibouti, was inaugurated at a new station just outside the Ethiopian capital.

The Ethiopian prime minister, Hailemariam Desalegn, and his counterpart from Djibouti, Ismael Omar Guelleh, were welcomed by the uniformed Chinese personnel who will be operating the trains until their local counterparts have been trained.

“This train will speed up the development of our country’s manufacturing industry and it will provide huge benefits to the industrial parks and modern farms that will be built in the future. It will give employment opportunities for our citizens,” Desalegn said at the ceremony.

While coffee production remains Ethiopia’s biggest earner and agriculture its main employer, the Horn of Africa nation is working on diversifying exports and boosting its manufacturing industry.

The new railway will take products between Ethiopia and Djibouti in about 10 hours, a far cry from the current excruciating multi-day trip along a congested, pot-holed road.

“We’re so excited! It takes two or three days for a truck to come from Djibouti,” said Ethiopian importer Tingrit Worku. “The train could make a huge difference.”

Some 1,500 trucks a day currently lumber along the road, which carries 90% of imports and exports from landlocked Ethiopia to the port – a key trade hub to Asia, Europe and the rest of Africa.

“This train is a game-changer. Ethiopia is one of the fastest growing economies in Africa. The connection to the ports of Djibouti will give a bounce and our economy will grow faster,” said Mekonnen Getachew, project manager of the Ethiopian Railways Corporation.

Ethiopia country was the world’s fastest growing economy last year at 10.2%, but the International Monetary Fund estimates that the worst drought in 30 years is likely to see this plummet to 4.5% in 2016.

The new railway means the end of the French-built diesel line constructed in 1917, which fell into disrepair in later decades, with frequent derailments.

The inauguration will be followed by a three-month test period, with no paying passengers and carrying only cargo on the line, which includes stops at Mieso, Dire Dawa and Dewele on the border.

However when the line is fully functional, uniformed Chinese controllers will welcome passengers to the spotless platforms of newly built stations all along the route, while Chinese technicians and stationmasters will keep things running behind the scenes.

“We don’t yet have the management experience yet. We have a management contract with Chinese staff for five years, with an Ethiopian counterpart in training,” said Getachew.

The new $3.4bn railway, with its red, yellow and green trains evoking the Ethiopian flag, was 70% financed by China’s Exim Bank and built by China Railway Group and China Civil Engineering Construction. 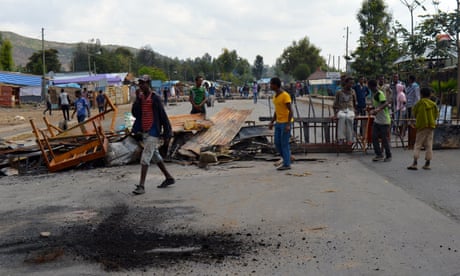 A high-level Chinese delegation, in Addis Ababa for the inauguration of the railway, on Tuesday signed further agreements worth $100m for the construction of roads, the state-controlled Fana Broadcasting Corporation reported.

Natural resources from Africa have helped fuel China’s economic boom, and it became the continent’s largest trade partner in 2009.

However, direct investment in Africa slumped more than 40% last year, as growth slowed in the Asian giant.

The railway is the first step in a 5,000km-long network of rail which Ethiopia hopes to build by 2020, connecting it to Kenya, Sudan and South Sudan.

Djibouti, the smallest state in the Horn of Africa, sees the project as the start of a trans-African railway crossing the continent from the Red Sea to the Atlantic Ocean, a journey which takes three weeks by boat.

However this dream appears far off, as the railway would have to pass through war-torn countries such as South Sudan or the Central African Republic.

• This article was amended on 6 October 2016. An earlier version said incorrectly that the new route was “the first electrified railway in Africa”.