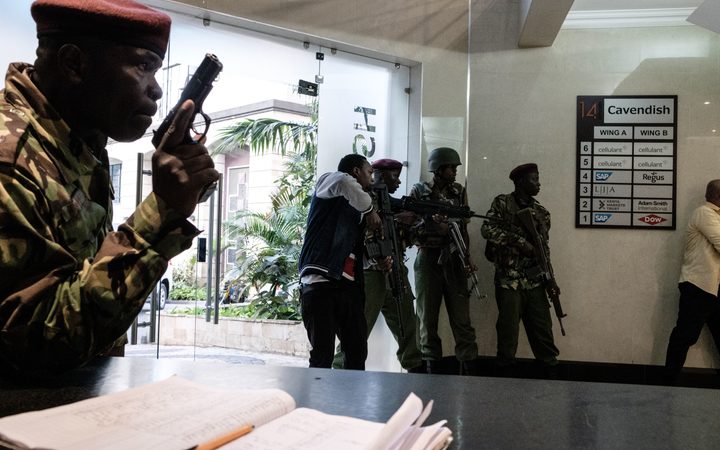 A New Zealander has been detained in Kenya but the government will not confirm whether he has been arrested on suspicion of terror, as is being reported by a Kenyan newspaper.

Kenyan special forces intervene after a bomb blast from the office block attached to DusitD2 hotel in Nairobi, Kenya, on 15 January, 2019. Photo: AFP

The Ministry of Foreign Affairs and Trade has confirmed that it is providing “consular assistance” to a New Zealander “detained in Kenya”.

It would not give any further details due to privacy reasons.

The Daily Nation, an independent Kenyan paper, said that Inspector General of Police Joseph Boinnet had identified the man as Sulub Warfaa, 36.

He told reporters that Warfaa was arrested with two passports bearing different names. The other passport had the name Ramadhan Yusuf.

He said another suspect Sakawawedin Abdullahi Mohammed, 33, was arrested with an Ethiopian passport.

“The two were heading to Garissa from Dajabula in a white Toyota Hilux Double Cabin,” Mr Boinnet was quoted as saying.

The other ten suspects were arrested during an operation at the Dadaab Refugee Camp in Garissa County.

Kenya is cracking down on terror attackers after Al Shabaab militants used grenades to blast their way into the DusitD2 luxury hotel this month.

The attack on 15 January left at least 21 people dead including 16 Kenyans including a police officer; an American 9/11 survivor; a British development professional; and three people of uncertain African nationalities.