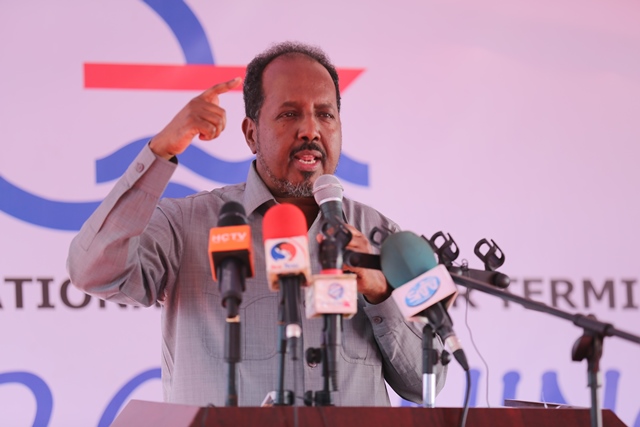 MOGADISHU (HAN) June 19.2016. Public Diplomacy & Regional Security News. The President of the Federal Republic of Somalia, HE Hassan Sheikh Mohamud has cut the wire to a new  International terminal Port in the city, which is designed to simplify the service port. Terminalkan new type known as “Dry Port”, located a bit outside of the port will be used to make all the container imported from the port of Mogadishu, where the process of the settlement in the investigation, intelligence and taxation of goods.

The Terminalkan new burden will Mogadishu, and is expected to also be so easy for the importation of goods. President’s statement suggested there was thanked SIMATECH International company which has invested in the implementation of this important project. “Government’s policy on the economy is based on encouraging the private sector. The project was carried out in the company Simatech is clear evidence that we are ready to invest in economic growth. The objective is to make these ports and other facilities known as “Dry Port ‘in order to jaanqaadno business growth and our economy’ ‘, he said. The President also revealed that there are plans to expand the port of the capital and other major ports in the country. The event, which was attended by members of both chambers also spoke SIMATECH International CEO, Mohamed Reza Maghami.