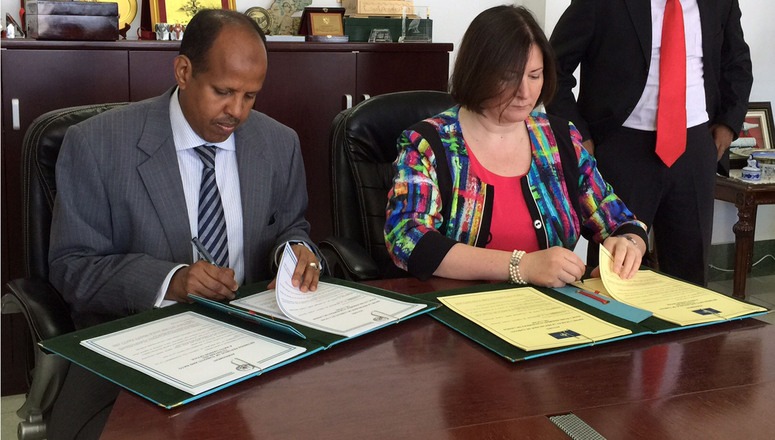 Djibouti  (HAN) April 23, 2015 – Public Diplomacy, Regional defense and Security News. NATO and the Republic of Djibouti have enhanced their cooperation, by concluding on 22 April 2015 an agreement to establish a NATO liaison office in Djibouti in support of the Alliance’s counter piracy operation, Ocean Shield, in the Gulf of Aden. NATO Deputy Assistant Secretary General for Operations, Ambassador Francesca Tardioli, and the Republic of Djibouti’s Minister of Foreign Affairs, H. E Mahmoud Ali Youssouf, signed the agreement.

The establishment of a liaison office will facilitate greater operational, logistical and administrative coordination. It will also provide the basis for further dialogue between NATO and the Republic of Djibouti on potential partnership activities in areas of common and  mutual interest, including the maritime dimension.  Djibouti is an active regional partner in the international efforts to prevent and deter the threat of piracy. It is also a strong supporter of the NATO Ocean Shield operation.

Ocean Shield was first established in August 2009 and has been subsequently renewed. The current mandate will run until the end of 2016. Since the launch of Ocean Shield, NATO has been working in close cooperation with other actors in the region including the European Union’s Operation Atalanta, the US Combined Task Force 151 and individual country contributors. No successful pirate attacks have been conducted in the area of operation of Ocean Shield since May 2012.