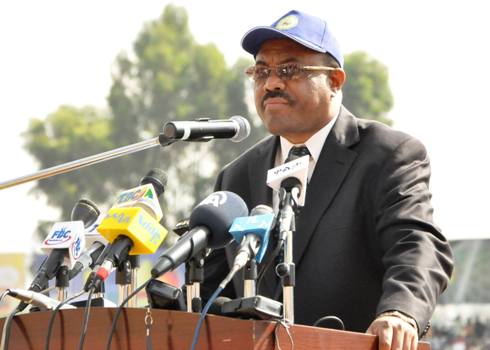 Peoples of Ethiopia have celebrated the 25th Anniversary of Ginbot 20, which marks the end of the military dictatorial rule of the Derg regime on Saturday (May 28, 2016). The Victory Day was colorfully celebrated in the nation’s capital, at the Addis Ababa Stadium in the presence of Prime Minister Hailemariam Desalegn, senior government officials, residents and invited guests. The 25th Anniversary of Ginbot 20 was celebrated under the theme: “Diversity-based Democratic Unity for our Renaissance.”

On the occasion, Prime Minister Hailemariam said Ginbot 20 has laid the foundation for the prevailing peace, democracy and development gains, while emphasizing the need to honor martyrs who lost their lives for the good of the majority that the country is witnessing now. The Premier called on the current generation to sustain such a hard-won legacy and join the fight against poverty. He said the country under the leadership of the Ethiopian People’s Revolutionary Democratic Front (EPRDF), has managed to make significant progress over the last quarter of the century. Among others, he said remarkable successes have been achieved in creating investors, addressing unemployment and housing problems, empowering women, protecting the rights of citizens, expanding telecom and electricity facilities as well as increasing the productivity of small-scale farmers, he said.

Noting that rent-seeking, ills of good governance, extremism, chauvinism, narrow nationalism unemployment, climate change and others were some of the challenges that the country faced during the past 25 years, the Premier said the government is resolute to address these and other challenges mounting both from outside and within to make sure that these challenges would not stand in the way of sustaining the country’s economic growth. “The celebration of this historic day helps us renew our commitment to realize the renaissance of the country, improve our strength, and look into our weaknesses,” he added.