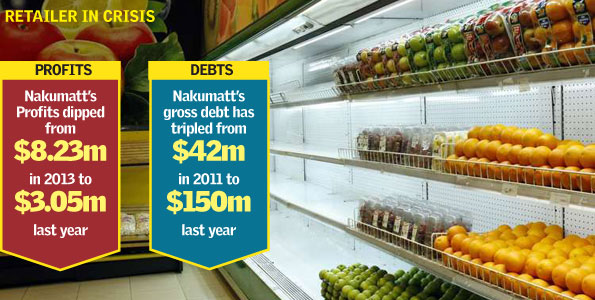 By ALLAN OLINGO. Regional retail giant Nakumatt Holdings is staring at some difficult options in raising capital to settle debts owed to financiers and suppliers.

The retailer has in the past couple of months grappled with boycotts from its suppliers over delayed payments and changes in contract terms, which have led to empty shelves in some outlets, particularly in Uganda.

Last year its profits dipped to $3.05 million from $8.23 million in 2013, largely due to rising interest charges associated with the large debt that has been used to fund growth.

“Whilst the capital expenditure costs have been high, the greater utilisation of debt has come from the working capital funding necessary to purchase stock for new stores. Gross debt has almost tripled from $42 million in 2011 to $150 million last year,” reads the rating.

Nakumatt is said to have used the debt, with a mix of its cash inflows, to cover its rising operating costs owing to the establishment of new stores. It increased its branches to 58 across the region, with 43 in Kenya, nine in Uganda, four in Tanzania and two in Rwanda.

Atul Shah, Nakumatt’s managing director said the retailer is currently engaging a number of local and international financiers for a financial bailout package.

Of interest to financiers will be how the retailer makes a paltry net profit of $3 million from revenues of $516 million, and what kind of debt restructuring will get it out of the hole it is in.

Analysts say the retailer has only three options: Conversion of some of its non-bank debt into equity, refinancing some of its more expensive short term debt with long term cheaper lines of credit and finding a strategic investor.

“Looking at their results, they have a weaker balance sheet and a strong cost base despite their cost line only being employee and rental premises. From this, there is an element in the books that is sucking money and this coupled with the chain’s ownership structure, is a potential turnoff for any strategic investor,” an analyst told The EastAfrican in confidence.

Investors will also be keen to understand how the retail giant dug itself into a debt management hole, whereas it has continued its ambitious expansion drive, pumping $4 million in capital investment in five new branches in Tanzania, Rwanda and Uganda this year.

Robert Juma of Catalyst Capital said that the retailer’s problem could only arise when its debt management is impacted by lower than average sales, rising costs of operations (employees, rent and warehousing cost) as some of these new stores require the support of the existing ones.

“With that tight debt management, the net effect is little cash available and the first casualty is always the suppliers’ payments,” said Mr Juma.