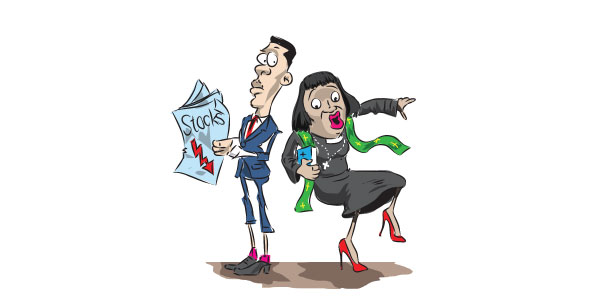 BY:Emma Kabanda.I first saw heaps of used clothes distributed for free in the aftermath of the overthrow of Field Marshal Idi Amin. Some people somewhere decided that in the wake of the war, Ugandans needed something to cover their nakedness and sent bales of used clothes that in my case were received by the Right Reverend at our parish church.

Mrs Rev and her dozen children must have spent some precious time rummaging through the heaps of the used clothes considering the increased frequency with which they changed clothes afterwards; sometimes several times a day.

Mrs Rev, apparently underestimating her age, chose several pairs of high-heeled shoes of different colours in which she wobbled as if on stilts to Sunday Mass until she sprained her ankle and went for easy-to-wear shoes fit for her age. The heaps of used clothes were then made accessible first to the catechist but because his family was young and small, they were then made available to the parishioners.

Those clothes were not sold then but there were issues with them; sometimes the collar was bigger than the rest of the shirt or blouse, or there would be long line of tiny buttons which took too long to do up, and sometimes the threads of the cloth were coarse like sisal, announcing to whoever cared that they were serving their second user.

It was later said that those clothes were clandestinely stripped from dead Bazungu before they were lowered into their miserable graves by for-hire but corrupt undertakers. Indeed the forbidding smell and wrinkly and crinkly appearance of the clothes lent credence to these reports.

By the early 1990s, the trade in used clothes had evolved into a thriving subsector of national economies in East Africa. The awful smell was gone; the clothes were washed and pressed. Long lasting and comfortable shoes appeared on the market, and even bedsheets and bed covers.

Trendy, fashionable and comfortable clothes, including expensive designer labels, were available for a pittance. It was like many of our people who watch the Premier League or UEFA Champions League in the comfort of bars; they do not travel to the stadia, but can enjoy the benefits of replays and close-ups while having nyama choma. That is until some benighted economist decided that the way to build the textile industry in East Africa is to ban used clothes.

There are people who should go to prison for messing up our lives by doing what they were not trained to.

A person who masquerades as a medical doctor and subscribes the wrong medicine will be severely dealt by the courts of law if the death of a patient follows; but pseudo-economists who mess up our economies are assured of the slow death of these economies without taking personal responsibility.

In 2007, hundreds of hectares of cotton turned from white to brown to yellow as cotton ready for ginning into lint rotted in Kasese’s Kibuku Irrigation Area due to lack of a market.

The farmers lost and the nation lost. Earlier, Asian companies eager to benefit from the USA’s Africa Growth and Opportunity Act (Agoa) brought into the country cloth that they branded “Made in Uganda” and re-exported to the US. At the end of the initial Agoa period, the Asians packed their bags and went home, leaving the textile sector in the mire.

Rwanda, the major proponent and enforcer of the ban on used clothes, does not have a single acre of land under cotton, and its single textile company has been kept afloat by supplying the army, police and prison services with uniforms.

Of the five value centres along the clothes value chain — ginning, spinning, weaving, tailoring and marketing — Rwanda’s textile “factory” did the last two by importing cloth from India, Sri Lanka or Bangladesh who won tenders from the government as sole “national” bidders until the Chinese offered an alternative.

Mwalimu Nyerere’s effort to ban mitumba (mitumba in Kenya, mivumba in Uganda, mutunda/cyaguwa in Rwanda) was reversed out of necessity, the “stain of white imperialism” notwithstanding.

While China was building its textile industry in the 1990s and early 2000s, our policy makers abandoned our textiles in favour of rents in form of taxes from imported cloth. These were easier to collect at the borders and hardly needed government support in form of subsidies that were in any case opposed by the World Bank and IMF.

With imported cloth, the government only needed to set the tax rate and collect revenue, and in the process threw away incomes to our farmers, taxes on farm-inputs, taxes on agro-traders, and incomes and social security contributions to local textile factory workers.

The ban on used clothes through incremental tariffs is a good tool to squeeze more taxes from the poor population — those well remunerated do not buy used clothes in the first place — but will not in itself lead to the development of the textile industry in the region because existing conditions do not give it a comparative advantage in the sector.

The 16th Ordinary Meeting of the Heads Of State of the East African Community, held on February 20, 2015 in Nairobi, made many resolutions, one of which was to speed up industrial development in the Community through banning importation of secondhand clothes.

Hitting below the belt

The ban would only come in effect, it was said, after an increase in local textile production. But in Rwanda, before a ginnery or tannery was constructed, taxes on used clothes and used shoes were increased from $0.2 to $2.5 per kg and $0.2 to $3 per kg, an increase of 12 per cent and 15 per cent respectively in the 2016-17 financial year.

“Taxes on used clothes and shoes will increase as a way of supporting locally made products and industries… Within three years, we will not just levy taxes, but effect a total ban,” said Finance Minister Claver Gatete, prompting MP Edouard Bamporiki to observe ruefully that, “without having textile factories, I am afraid some people may not get enough clothes,” which was an understatement.

We buy and wear mitumba/mutunda/mtunda/muvumba/cyaguwa out of practical economics and necessity, and the increased taxes will hurt the poor rather than support EAC industrialisation.

We have learned to deny ourselves many things including the right to express our views on different things, but denying us the right to choose clothes to wear that suits our pockets is hitting below the belt.

Emma Kabanda is a development economist based in Kigali. E-mail: ekaba2012@gmail.com