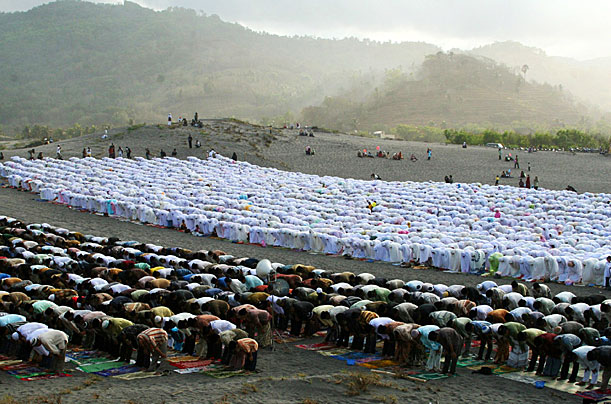 Like the start of Ramadan, during which believers abstain from eating and drinking during daylight hours, Eid-al-Fitr depends on the sighting of the moon and its celebration varies in different countries. The day begins with early morning prayers and then family visits and feasts.

For those displaced by fighting in Syria and Iraq, this Eid was yet another festival marked away from home.

At an informal camp near Lebanon’s Bekaa Valley where many Syrian refugees now live, the common sentiment among those who had fled their country was homesickness.

“When we greet each other, we wish we’d return to Syria. I hope we all go back to Syria,” said 24-year old Mohammed, who fled Syria some three years ago. “This Eid comes once a year, we are happy for a day, not more.”

Eid was also being celebrated on Wednesday in other Middle Eastern countries as well as nations in Asia and Africa.

In Mogadishu, hundreds gathered in an open air stadium for prayers, while in Addis Ababa, men sang after attending prayers.

In Indonesia, the world’s most populous Muslim country, thousands of people attended prayers at the grand mosque of Dian al-Mahri in West Java province.

In Karachi, Pakistan, the festival was observed under tight security, with police as well as soldiers deployed around special Eid prayer grounds.

Afghan President Ashraf Ghani called for peace in his war-torn country at an official gathering at the presidential palace in Kabul.

Muslims in Kashmir and the southern state of Kerala in India ushered in festivities a day ahead of nationwide celebrations on Thursday. Muslims traditionally shop on the eve of Eid for new clothes and food.

In Bangladesh, people headed to markets and train stations for journeys home ahead of the festival which will be marked on Thursday. However, fears were also high following last week’s Islamist militant attack on an upscale restaurant in Dhaka in which 20 people were killed.

“There are fewer customers in the market, and we fear that there could be more attacks like that in the markets so customers are not coming,” shop owner Akhtar Hossain said.

In Europe, Muslims wailed in prayer in a basement to mark the end of Ramadan in one of the Greek capital’s many makeshift mosques set up in garages or abandoned warehouses. Athens has had no formal mosque since independence from the Ottoman Turks in 1832, but pledged last month to build one for its 200,000 Muslims.