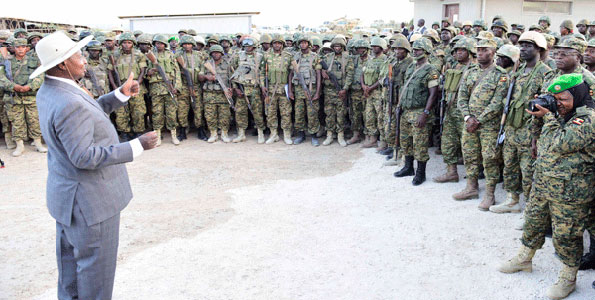 The president was in Mogadishu to attend the 28th Intergovernmental Authority on Development (Igad) plus extraordinary summit of heads of state hosted by Somali President Hassan Sheikh Mohamoud.

Somalia is one of the eight members of the regional bloc (Igad) with Uganda, Kenya, Djibouti, Ethiopia, Rwanda, Sudan, South Sudan and Eritrea, established in 1986.

In his address to the troops, President Museveni, commended the UPDF for what he described as the spirit of “Pan-Africanism which is one of the core values that make Ugandan army an exemplary force on the continent”.

“I thank you for helping our brothers and sisters in pacification of Somalia, and being a good example of unity,” the President said.

According to a statement issued by the UPDF Amisom contingent spokesperson, Capt Flavia Telimulungi, the President urged the troops to resist parochialism based on religion, gender disparities and clans, which he said is one of Africa’s major problems.

The summit at the presidential palace was also attended by Kenya’s President Uhuru Kenyatta, and Ethiopia’s Prime Minister Hailemariam Desalegn.

Also in attendance were representatives of the UN, African Union, European Union and Arab League.

Uganda deployed its troops in 2007, and currently maintains the largest peacekeeping force of 6,000 in Somalia, but recently has hinted on pulling out, citing cutting of support by the donor community.

Other countries contributing troops to Amisom include Burundi, Ethiopia, Kenya and Djibouti. The mission is funded by the EU, US and United Nations.