Home frontpage Museveni says he’s “not excited” about Uganda’s oil. Is anyone anymore? 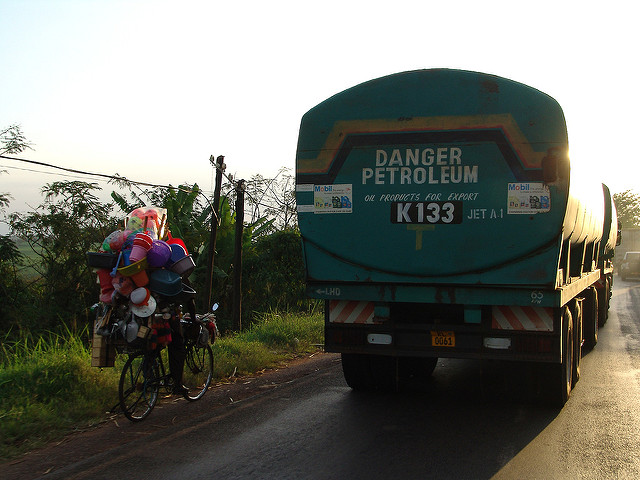 The discovery of sub-Saharan Africa’s fourth largest oil reserve has been hailed as a panacea to Uganda’s problems. But even at peak production, it will only generate two barrels of oil per citizen per year.

A decade after the discovery of large reserves of commercial oil in Uganda was greeted as a game-changer for the country, some once optimistic leaders have reached a grim conclusion.

“Oil is a burden for us now,” says Norman Lukumu, prime minister of the Bunyoro Kingdom, where the majority of the deposits lie. “Some schools have been built but families displaced by land grabbers can’t use them. A road, some hotels, that’s all we have.”

Although production has not yet started, political leaders in Kampala have typically touted oil as a panacea to problems faced by one of the poorest countries in the world.

This August when production licence agreements were signed, for example, Oil Minister Irene Muloni hailed the 6.5 billion barrels found in the western region around Lake Albert as the solution to infrastructure challenges, rampant youth unemployment and a struggling economy.

“Service providers, jobseekers prepare yourselves. Let’s get ready to achieve our president’s vision for this country to become a middle-income country in the short term,” she said.

That vision, outlined by President Yoweri Museveni in his state of the union address this year, includes using oil to fund “the roads, the railway, electricity, irrigation, some aspects of education and health” as well as a long list of innovations from electric cars to banana juice.

These ambitions rest on the fact that of the 6.5 billion barrels discovered, 1.7 billion are easily recoverable. However, while this makes the find the fourth largest reserve of crude oil in sub-Saharan Africa, shared out equally across Uganda’s population, each citizen would only get about two barrels a year at peak production.

This compares to 39 per citizen in Angola, and 261 in Norway. Uganda’s oil revenue might be enough, used wisely, to spur some productive investments, but not to transform the country.

“Oil and gas is not about to be the saviour for Uganda,” says Gerald Byarugaba of Advocates Coalition for Development and Environment.

However, while oil might not transform the country as a whole, its discovery has had enormous impacts on many communities. In the vast areas around the national park under which much of the oil sits, for instance, rife land speculation has led to widespread displacement.

“Oil is a good project but it has become a problem in the whole Albertine region,” says Gustav Ofungi Kasangaki, chairman of Kyehoro village, a small settlement of grass-thatched houses which relies on fishing from wooden canoes on Lake Albert.

“Land issues have become a problem. You can own a piece of land and then you discover it doesn’t belong to you,” he says.

Richard Orebi of Global Rights Alert agrees. His NGO advocates for the rights of people displaced from their land by rich speculators, who often have ties to powerful national politicians and civil servants.

In one case, 7,000 people are being displaced from 29 square kilometres which has been earmarked to build a refinery, although the project is mired in confusion after Russian and South Korean partners pulled out of the deal.

To speed up such land acquisitions, the government is even talking about amending the constitution to circumvent a requirement for “fair and adequate” compensation to be paid before land is taken, a possibility that deeply worries Orebi.

“Government and the oil companies are not informing people of what the oil industry is, or the benefit with it, or what are the challenges that come along with oil development,” he says. “They don’t want people to know that they have rights over their land.”

Issues over land and setbacks in the building of refinery are not the only aspects of Uganda’s oil project that are struggling.

Although the August signing of long-awaited production licences in favour of Total and Tullow Oil – two of the companies in an international consortium to manage the fields along with the Chinese state-owned CNOOC – and a decision in April to route an export pipeline through Tanzania mark important milestones, managers in those companies believe that the Ugandan government’s ambition to have oil flowing by 2020 is overly ambitious.

Jimmy Mugerwa, General Manager of Tullow in Uganda, has said that 2021 is the earliest he expects production to start.

Part of the challenge surrounds the building of a suitable pipeline. In order to deliver the viscous type of crude oil sitting shallowly under the Albertine Graben, a 1,400 kilometre pipeline running from close to the eastern Democratic Republic of Congo to the Indian Ocean will have to be heated. This highly demanding engineering project would be the longest of its type in the world and likely cost around $4 billion.

“Technically it can be done, but to do it in East Africa, at the length we’re talking, it’s going to be a challenge,” says Charles Goedhals of Gaffney Cline and Associates, a consultancy.

“You’d need to guarantee volume through that pipeline to make it commercially viable. With a heated pipeline you have to be far more careful about operational parameters.”

At today’s prices of around $50 a barrel, the largest field could generate a 10% post-tax return according to the World Bank, though other analysts talk of $60 to make Ugandan oil viable.

However, long delays in reaching the production stage mean that the ultimate oil price when Uganda is ready to produce is unknown.

The uncertain schedule also poses economic risks. Uganda’s public debt, at 33% of GDP, is low for the region and it has not made the same mistakes as Ghana, which issued dollar-denominated bonds in anticipation of oil revenues. But Adam Mugume, the director of research at the Bank of Uganda, has warned that the country could default on its debt if the oil does not arrive on time.

“I wouldn’t be surprised if because we have oil there is no pressure to collect taxes,” says Joseph Mawejje of the Economic Policy Research Centre, a Ugandan think tank.

The political clock is ticking. Facing elections in 2021, the Ugandan government may look for ways to cut corners. This would be a risky manoeuvre in the Lake Albert region, one of the most ecologically diverse areas on earth, where 52% of Africa’s bird species and 39% of its mammal species can be found.

At the same time, there are also signs that Museveni, who once dismissed oil pessimists as “saboteurs and quislings”, is belatedly trying to manage expectations. In a speech last month he claimed to be “not excited” about oil, which he called “a small aspect of a big story of prosperity”.

That is a message that Bunyoro Kingdom’s prime minister Lukumu is already preaching.

“Initially our expectations were very high,” he says. “We were waiting for the miracle to happen, but not anymore.”

Liam Taylor is a freelance journalist based in Kampala. He blogs regularly at liamtaylor.org.