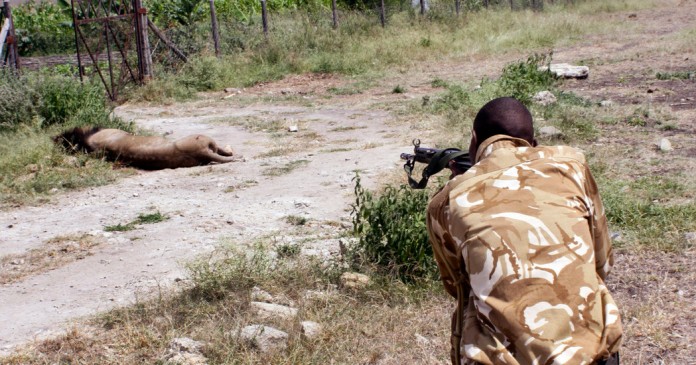 MOGADISHU (HAN) March 31. 2016. Public Diplomacy & Regional Security News. Wildlife officers in Kenya fatally shot one of the country’s best-known lions on Wednesday after their attempt to capture it alive attracted a crowd, whose presence upset the animal and led it to injure a bystander, the Kenya Wildlife Service said.

The lion, a 13-year-old male known as Mohawk for the shape of his mane, was a tourist favorite in Nairobi National Park. His death was met with outrage online and quickly brought to mind the high-profile killing of Cecil, a 13-year-old lion shot by an American hunter in Zimbabwe in July.

“Some fools killed a lion by the name Mohawk today here in Nairobi,” a Nairobi resident wrote on Twitter. “It’s crazy to think about it even for a second.”

The wildlife service said in a statement posted to Twitter that a veterinary and security team had gone to an area outside Isinya, a town 35 miles south of Nairobi, the capital, at 8 a.m. on Wednesday after they were “alerted to the presence of a lion.”

The team found Mohawk and stood guard around him while they waited for the arrival of reinforcements who were supposed to tranquilize and capture him, the service said.

A spokesman for the wildlife service told The Washington Post that the first response team was not equipped with tranquilizers, only rifles, and so had no nonlethal way to subdue the lion. The capture team, which left Nairobi at 9:30 a.m., did have tranquilizers. But while they were on their way, the situation in Isinya spun out of control, and within an hour, Mohawk was dead.

A large group of people gathered to gawk at Mohawk, the wildlife service said, which “brought about a visible agitation in the lion due to the rowdiness and size of the crowd.”

The Associated Press said there were as many as 400 people in the crowd.

Mohawk lashed out at one of the gawkers when “the public confronted” him, the wildlife service said, leaving the rangers with little choice but to shoot in order to “avert injuries or, at worst, deaths.”

Video of the lion’s death showed him wandering among cars in a grassy area before breaking into a run and charging at a group of people standing in the back of a pickup truck.

The Associated Press said that he struck a 27-year-old man on a motorcycle, who sustained bruises and deep lacerations on his back.

Mohawk, who was born in Nairobi National Park, had been involved in territorial feuds with other lions in recent weeks, the service said. Isinya, roughly 20 miles south of the park, lies along a seasonal migration route. The service said they believed Mohawk had gone there to establish new territory for himself.

The wildlife service described the decision to kill him as “a last resort” and sought to reassure the public that they were in the business of protecting, not killing, animals.

“We wish to assure the public that we remain true and committed to serving and protecting our wildlife resources,” it said on Twitter. “Our number-one focus has and will always be conserving our wildlife for Kenyans and the world as a whole.”

The uproar over the death of Mohawk mirrored a similar outcry in South Africa, where South African National Parks officials said this week that they had decided to kill a lion known as Sylvester who had escaped on Sunday from Karoo National Park, roughly 300 miles northeast of Cape Town.

But the parks service appeared to soften its position on Wednesday after outrage flooded social media under the hashtag #SaveSylvester.

South African National Parks said it would consider a range of options in its response to the lion’s escape, including sending Sylvester to another park or donating him to a private conservation group. But the agency warned that lethal force was still on the table.

“If the animal kills a person it poses an even greater danger as it may lose fear for humans and see them as easy prey,” the parks service said in a statement.