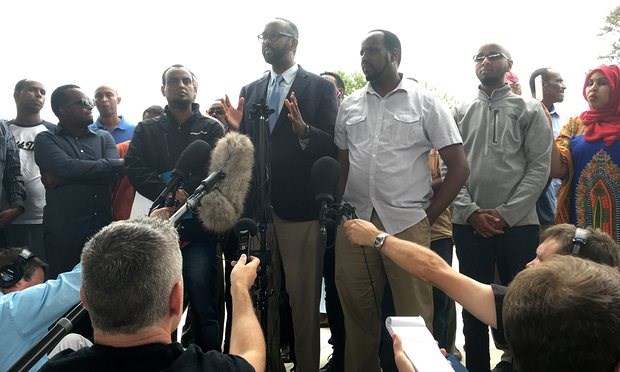 The Somali American community in St Cloud, Minnesota, condemned on Sunday the mass stabbing attack at a mall the night before, as the immigrant population confronted longstanding tensions and unconfirmed reports emerged of the suspect’s identity.

Police have not yet named the suspect, who wounded nine people on Saturday night at the Crossroads Center mall, and whose attack is being investigated as “potential act of terrorism”. But Ahhmed Adan, a Somali immigrant, told the Minneapolis Star Tribune on Sunday that police had told him the night before that his son, Dahir Adan, had died the night before.

None of the nine injured people suffered life-threatening injuries, and the only fatality of the attack was the suspect, who was shot dead by an off-duty police officer.

Police did not mention the attack on the mall, Adan said, but they seized photos and other materials from the family’s apartment. Adan said his son came to the US 15 years ago and was a student at St Cloud Technical and Community College. He added that he had “no suspicion” that his son might have considered such an attack.

Within hours of the attack, in which the suspect reportedly spoke of Allah, members of the Somali American community began to see anti-immigrant and Islamophobic messages directed toward them online. The virulence increased when an Islamic State-run news agency claimed credit for the attack; the terror group has previously claimed credit for attackers with whom it had no contact.

A leader of the community, Abdul Kalane, said he fears how those online messages will translate into the real world, especially since Dahir Adan was his neighbor. Kalane said he had moved to a new building at the beginning of the month, and met Adan in the parking lot. Though he didn’t know Adan well, he said he believed he was in his 20s and had moved to the United States at a young age.

“When I heard that the guy who did this was a member of the Somali community, I was so devastated, because I know what’s going to happen. The repercussions, the retaliation,” Kalane told the Guardian. “I was shocked, because the guy lives in the same building I live in. And even though we don’t know the full picture, we are actually devastated by this. It’s really tragic.”

St Cloud is home to a growing Somali Muslim community, largely made up of refugees feeling the country’s civil war. In January, the local paper reported that about 20% of St Cloud’s students came from homes where the primary language spoken at home was Somali.

Not everyone has been accepting of the new arrivals. Last year, Somali students at one local high school staged a walkout to protest discrimination after a Somali student was labeled as “Isis” on snapchat. A nonprofit called #UniteCloud later formed to help bridge the gap between the Somali community and the more established, mostly white St Cloud residents.
Natalie Ringsmuth, a white Minnesotan who co-founded the group with Haji Yusuf, said they had long feared something like this could happen.

“A some point in our community, we knew that the tensions were so high that somebody from either side of the equation was going to commit an act of violence,” she said. “Unfortunately, we’re here, but we’ve mentally prepared for this.”

Somali community leaders held a press conference Sunday afternoon to plead to plead for unity. Activist Lul Hersi said she had feared for her one of her sons when she heard about the attack, and was relieved when he arrived home that night. She called it a “dark day” that the community would never forget.

“We condemn the acts of yesterday. It was an individual and we don’t know what motivated that individual,” she said. “Let’s unite as one Minnesota. Let’s take love instead of hate.”

Community leader Hassan Yussuf said he hoped the city’s recent progress wouldn’t be derailed. “St Cloud has done a lot of hard work to come together, all of the leaders, and that should not be broken by this incident,” he said. “This incident should not be used to spread hate. It should be used to bring us together.”

Despite the absence of confirmed facts, at least one anti-immigrant group, Act! For America, seized on the attack for political purposes. The group posted a link about the stabbings with a question: “More refugees, anyone?”

Jaylani Hussein, the executive Director for the Minnesota Chapter of the Council of American-Islamic Relations, said central Minnesota has a history of anti-Muslim organizing. He pointed to a string of incidents dating back years, including visits by well-known anti-Muslim speakers and a recent billboard, eventually removed, that read “Catholic Charities Resettles Islamists, Evil or Insanity.”

“It’s not just random people being upset and acting randomly. This is people who actually organize, who hold events, who hold meetings, who fundraise. They make sure everyone in their community is aware of what is going on,” he said.

Hussein, like many present, said he hoped the stabbings would help bring the community together.
“There is tension, there is real concern, and this incident just magnifies everything that has happened here,” he said. “But we hope, even this big of an incident can bring St Cloud residents who have not played a role in this discussion to start to take back the narrative from the extremes.”

Ringsmuth, too, thought the attack posed Minnesotans a choice. “We are at a crossroads in our community,” she said. “This has broken us, we can either begins the road of healing together by choosing peace, or we can be broken even further, and that’s up to us.”