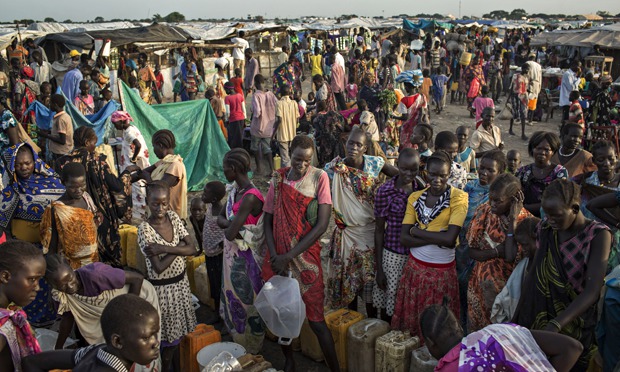 JUBA (HAN) May 16.2016. Public Diplomacy & Regional Security News. At least 5.3 million people or nearly half the population of South Sudan could face acute hunger in the next three months during the lean season, when traditionally hunger worsens, a United Nations food agency warned last week.

Too many people, World Food Programme (WFP) revealed, are unable to meet their food needs because of the combined effects of more than two years of fighting, a collapsing economy, high food prices and erratic rainfall.

As such, the UN agency said, almost US$230 million is urgently needed to provide food and nutrition assistance over the next six months in the world’s youngest nation.

“This is a significant funding gap at a critical time of year: we need to scale up support during the lean season, and we need to pre-position lifesaving food in places that become inaccessible during the rainy season,” it said in a statement.

“The window of opportunity to reach those areas by road is closing rapidly, after which WFP will have to rely on costly air operations,” it added.

Early this year, however, 2.8 million people were termed as being in a crisis or emergency food situations, with about 40,000 of them believed to be suffering an outright famine.

“Internal food security analysis shows that South Sudan will face the most severe lean season in 2016 since its independence, driven by insecurity, poor harvests, and displacement in some areas of the country,” said WFP.

Areas likely to be hit hard, it said, are non-conflict affected states like Northern Bahr el Ghazal and Eastern Equatoria.

The conflict, which broke out in 2013, has negatively impacted on the nation’s citizens, including pushing the country to the brink of famine with 5.8 million people, nearly half of the population, in desperate need of humanitarian assistance, a joint U.N assessment report recently-showed.

Observers say despite being oil-rich, South Sudan is likely to record negative gross domestic product growth in 2016 after growing by 30.7 percent two years ago, largely due its conflict, decline in oil production and global fall in oil prices.

However, as the country’s work in a unity government, among its first challenges, will be to overcome mistrust between them. Besides, there are other rebel groups which did not sign the peace deal and this could prove a setback.