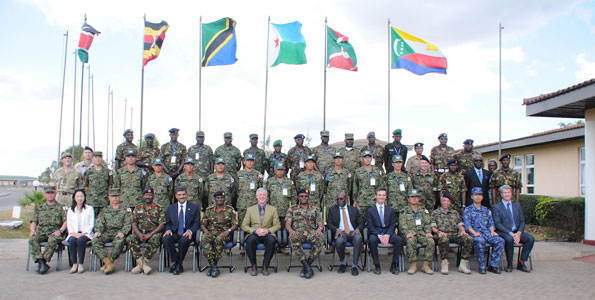 cekeeping missions. It was held at the Humanitarian Peace Support School in Embakasi, Nairobi. Mr Anthony Banbury, the United Nations Assistant Secretary-General for Field Support, who was the chief guest said the training of the senior officers will help fast-track deployment of troops and improve their response to crisis. The officers were drawn from the four East African Community countries of Kenya, Uganda, Tanzania and Rwanda. “The rapid deployment of engineering capabilities to peacekeeping missions in Africa remains an urgent requirement. All professional soldiers know that military operations cannot be successful without logistics and without engineering,” said Mr Banbury.

The UN official said all too often peacekeeping missions in the continent have had good infantry units but lacked logistics and engineering capabilities to support them, adding that the Triangular Partnership Project was aimed at addressing the gap. Mr Banbury said delays in the deployment of UN troops due to lack of infrastructure could reduce chances for peace and erode trust in the international community, by populations living in stressed and conflict environments. “Rapid deployment of troops into well situated and defended camps can greatly improve conditions on the ground, build confidence, provide stability and ensure that the United Nations (UN) is able to create and maintain peace. This is a fundamental need that this project is designed to help meet,” he added. Mr Banbury thanked the governments of Japan and Kenya, the other partners for organising the training, saying countries had the opportunity of learning from the project.

The just concluded training is one of the several programmes, planned by the UN and the United Nations Support Office for AMISOM (UNSOA), to equip military personnel in the continent with the necessary skills before being deployed to UN peacekeeping missions. Speaking on behalf of the Japanese government, the Director of Operations Support Division in the Ministry of Defence in Japan, Colonel Kazuo Sakai, said his country’s contribution was in line with its policy on proactive contribution to international peace and stability. Eleven Japanese instructors trained the soldiers for the entire six weeks. Brigadier Jonah Mwangi who represented the Kenya Defence Forces (KDF) at the ceremony, described the event as an important milestone in improving rapid deployment in peacekeeping missions. “The rapid deployment of engineering capability to United Nations and African Union (AU) peacekeeping missions, particularly in Africa requires timely response,” Mr Mwangi said. The participants were trained on the operation and maintenance of heavy engineering equipment as well as best practices on equipment handling and procurement processes. The trial training was conducted with additional support from the United Nations Office for Project Services (UNOPS) and UNSOA. theeastafrican