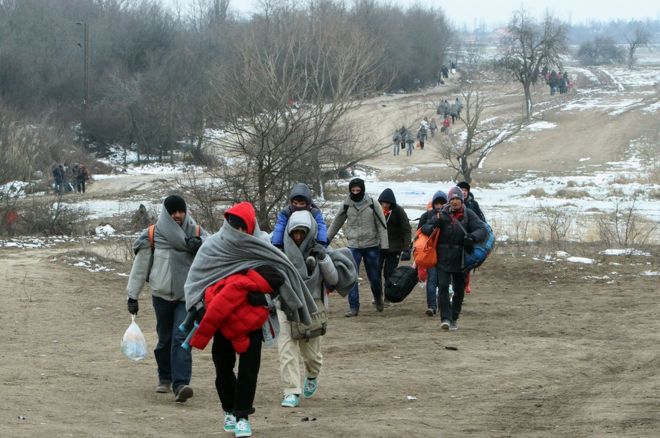 The total number of migrants reaching Europe by two main sea routes in 2016 fell by nearly two-thirds to 364 000 in comparison with 2015. Last year saw a significant drop in arrivals on the Greek islands, while Italy experienced a record number of migrants.

According to preliminary estimates, last year the number of migrants detected on Greece’s islands in the eastern Aegean and its mainland dropped by 79 % to 182 500. This was in large part due to the EU/Turkey statement, which came into effect in late March and led to tighter border control by the Turkish authorities and readmission of migrants from the Greek islands to Turkey. The drop was also influenced by tighter border controls in the Western Balkans.

Since March, the monthly numbers of arrivals on the Greek islands accounted for just a fraction of the previous year’s figures and ranged between 4 400 and 1 800. Syrians, Afghans and Iraqis accounted for the largest share of the arriving migrants.

Coinciding with a decreasing flow on the Eastern Mediterranean route, the number of migrants across the Western Balkans in 2016 fell sharply to 123 000 from 764 000 in 2015. Last year’s drop was also affected by a range of measures implemented by the EU and Western Balkan countries.

Meanwhile, the number of detections on the Central Mediterranean route rose by nearly one-fifth to 181 000, the highest number ever recorded. This reflects a steadily increasing migratory pressure from the African continent, particularly West Africa, which accounted for most of the growth in 2016.

Since 2010, Italy has seen a tenfold increase in detections of West Africans at its sea borders. Nigerians made up the largest portion of the migrants on this route, followed by nationals from Eritrea, Guinea, Côte d’Ivoire, and Gambia.

In total, in 2016 there were an estimated 503 700 detections of illegal border crossings along the EU’s external borders.