Home Ethiopia MFA commends the Diplomatic Community for its support 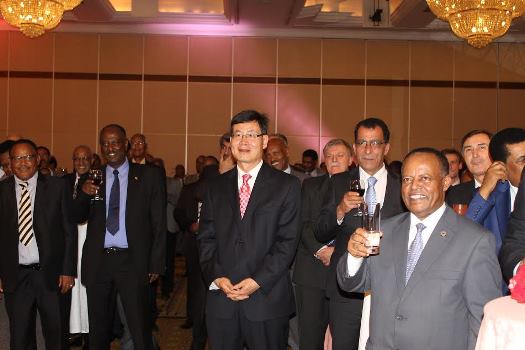 The Ministry of Foreign Affairs of Ethiopia organized a day of “Thank You!” event for the Addis-based Diplomatic Corps for their continuous support to Ethiopia’s election as a non-permanent member of the UNSC at a reception held on Thursday (August 11, 2016) at Sheraton Addis.

During his address to the members of the diplomatic corps Minister of Foreign Affairs, Dr. Tedros Adhanom has thanked various stakeholders – Governments, the East African Group, the African Union as well as Ethiopia’s Ambassador and Permanent Representatives to various international organizations – “who did so much and worked incessantly to make Ethiopia’s aspirations a reality.”

Dr. Tedros underscored that, “Ethiopia believes that it has joined the UNSC at a critical time in world history for the international community currently is facing complex peace and security challenges.” Amid the challenges, Dr. Tedros, said “Ethiopia has been actively involved in working to help maintain the peace and security of the international community, an initiative that spans as far back as the inception of the UN.” He added, “Ethiopia remains committed to work with Regional and Sub-regional organizations to counter terrorism and violent extremism.”

Speaking of Ethiopia’s non-permanent membership to the UNSC for the period 2017/2018, Dr. Tedros has assured the Diplomatic Corps, that “Ethiopia will remain committed to the continuation of its contributions towards the strengthening of international peace and security, the promotion of human rights and respect for international law.” Expanding further and emphasizing Ethiopia’s longstanding adherence to the principles of multilateralism and collective security, Dr. Tedros said “During our non-permanent membership to the UNSC, we will work in close cooperation and coordination with our African Brothers and Sisters in particular and the other Members of the UNSC in general.”

The Minister closed his remarks by thanking the Members of the Diplomatic Corps once again for the “trust you have shown in us.” He told the diplomatic community in Addis, “We will not let you down in the discharge of our esteemed responsibilities as a non-permanent member of the UNSC” for the period 2017/18.