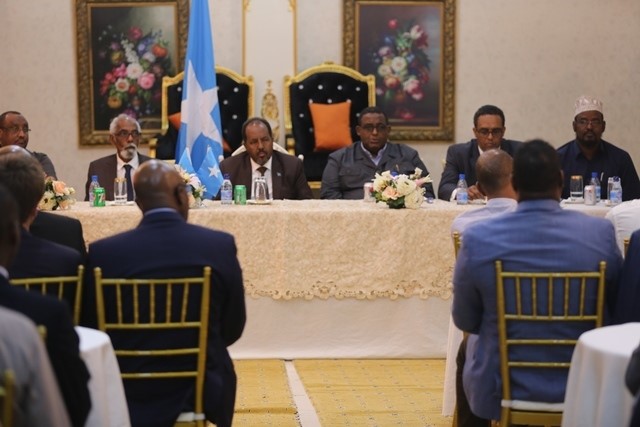 MOGADISHU (HAN) August 13.2016. Public Diplomacy & Regional Security News.Mr. Mohamud M Uluso. Four years of highly “Enhanced” international engagement between the federal Government of Somalia and the International Community did not lead to a political election that strengthens the foundations of peace building and state building based on the rule of law, accountability, and democratic governance. Following the failure to fulfill the constitutional obligation of one person one vote (OPOV) election in 2016, a National Leadership Forum (NLF) composed of 5 Presidents of federal and regional states, the Speaker of demobilized Parliament, the Prime Minister (PM), and Deputy Prime Minister (Ex Officio President of Somaliland state) assumed the responsibility of setting the rules for an indirect election. The NLF also takes long term consequential decisions on national security and political dispensation without due process.

The last meeting of the NLF held in Mogadishu on August 2-9, 2016 issued a communiqué later criticized by some members. The Communiqué conveys among other things the following decisions:

As unprecedented and ominous development, the President of Galmudug State Abdikarim Hussein Guled and the Deputy Prime Minister Mohamed Omar Arte, leader of Somaliland (Northwest, Awdal, Sol, Sanag, and Togdher regions) took exceptions to some of the decisions conveyed in the official Communiqué. This open quarrel on the official Communiqué within NLF has discredited the integrity and legitimacy of the NLF decision making process.

The creation of the NLF has obliterated the supremacy of the provisional constitution and rule of law based on democratic checks and balances. Somalis are left without legitimate independent credible mechanism for challenging and seeking redress any of its illegal, unfair, harmful or disputable actions. Thus, the prevailing Somali public view is that the electoral process will not be free, fair, and transparent as vehemently claimed in national and international arenas. Indeed, the growing skepticism and disenchantment of the Somali opinion on the electoral process could frustrate the enhanced engagement of the international community with Somalia.

In an interview on the eve of the abovementioned NLF meeting, the Special Representative of the UN Secretary General (SRSG), head of the United Nations Assistance Mission in Somalia (UNSOM), Mr. Michael Keating described the UN role in the electoral process of Somalia as an advisor and a facilitator bringing together the Somali leaders to discuss “what is desirable for Somalia”  and achieving “what they want to achieve through this [electoral] process.” He pointed out that a number of things has to be put in place for the credibility of the electoral process “in the eyes of the Somali public and indeed in the eyes of the international community.” The achievement of this goal with the NLF electoral patchwork design is doubtful.

In comparing the 2012 and 2016 electoral processes, the SRSG limited himself to point out the differences in terms of number of electorate colleges, electoral locations, and percentage of women’s participation. However, he did not mention that the planned 14,025 voters are far less than the numbers of 55,000 to 100,000+ voters suggested by the majority of the Somali civil society for combatting corruption and increasing public participation. Based on experience, the hype for the feasibility and reliability of 2020 electoral OPOV model is premature and risky.

On the partiality of working with FIEIT, the SRSG responded that the UN works with everybody based on the presumption that “this is a very unique moment in Somalia history and our job is to make sure that Somalis are sorting out what they want, are benefitting from global experience regarding rules, procedures, what makes a process transparent, what can make it fair, What can make it verifiable and so on.”  On the electoral preparation, the UN preferred to work with 8 incumbent leaders as counterparts over the federal parliament, civil society, public intellectuals, and influential leaders.