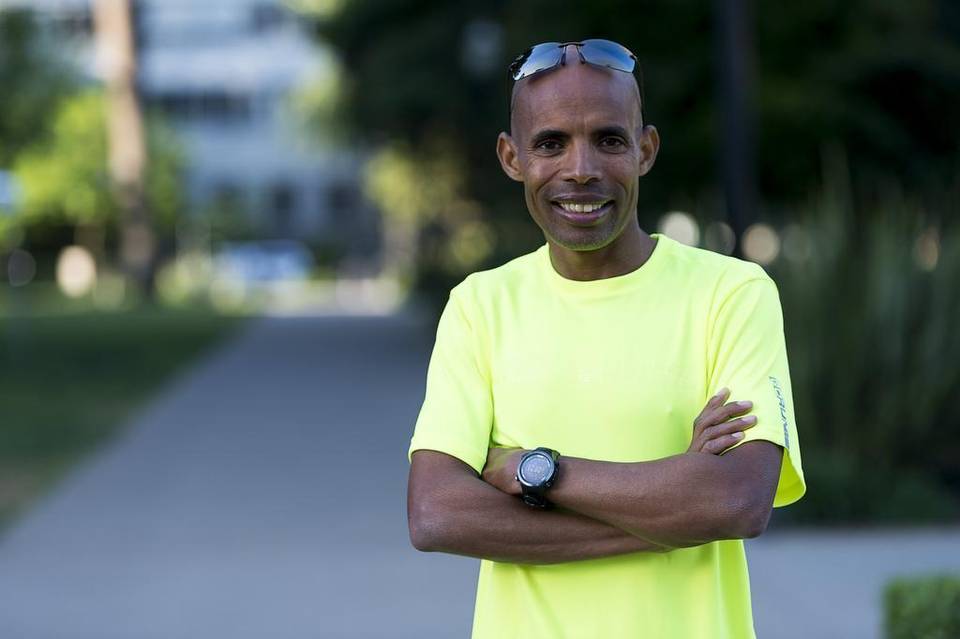 NAIROBI (HAN) May 2. 2016. Public Diplomacy & Regional Security News. BY STEPHEN MAGAGNINI. Marathon legend Mebrahtom “Meb” Keflezighi tuned up with a quick mile run around the Capitol in his neon-yellow jersey Sunday, followed by a longer jaunt along the American River.

The only athlete ever to win the New York Marathon, the Boston Marathon and an Olympic medal, Keflezighi had come back to the town where his career took off.

“I made my first Olympic trials in Sacramento in 2000,” said the 41-year-old, who’s again on the brink of making history. This August in Rio de Janeiro, he will become the oldest American runner to ever compete in the Summer Olympics, his fourth.

On Sunday, he shared his epic life story with 4,000 people at the Sacramento Convention Center, recounting not just sports glory, but escape from war, drought and famine in his native Eritrea.

The secret of running – and life – “is just get up and do it! Get started, set goals, be disciplined and committed,” said the man universally known as Meb, who delivered the keynote speech at National University’s Northern California commencement.

When he says “life is not a sprint, it’s a marathon,” he’s lived it.

“In life as in running, the finish line of one race is the beginning of another,” Keflezighi told more than 400 graduates and their friends and families. “It’s all about ups and downs, bounce-backs and redefining who you are.”

Keflezighi reflected on his odyssey from a poor village without electricity or running water to international stardom.

“I didn’t see my first TV until I was 10, and ran around to the back to see how the people got inside,” he said with a smile. “When I saw my first car I ran into the bushes.”

Running came naturally to the wiry youth, who’d sprint to school, then go three miles to the well to haul water and another three miles to collect firewood.

“Land mines were scattered all over our country, and I lived in fear,” he said. “Sometimes I was so hungry, I would eat dirt.”

His father, who faced arrest or even execution for his support for Eritrean independence, fled to Sudan, walking 225 miles in seven days “to save his life and ours.” After two years, he made it to Italy, working as a landscaper and janitor to raise enough money to get his family out of Eritrea, Keflezighi said.

Keflezighi was 12 then and had a third-grade education.

“People made fun of my tight Italian clothes, which are back in style, and my curly Afro, which I wish I could still have,” he said, rubbing his smooth head.

His breakthrough came in his seventh-grade physical education class, when the coach promised an A grade to anyone who could run a mile under 6 minutes, 15 seconds.

He won a scholarship to UCLA, where he won four NCAA championships. He became a U.S. citizen in 1998, set several records in the 10,000-meter event but almost quit after his first marathon in 2002.

He learned, however, that “life is not about shortcuts or instant gratification.”

He won the marathon silver medal at the 2004 Olympics in Athens but broke his hip during the 2008 Olympic trials. Some thought he would never run again. Instead, he trained relentlessly and came back to win the New York City Marathon in 2009. But halfway through the Olympic marathon in London in 2012, he was stricken with a painful stitch and a blister.

“Dropping out crossed my mind, but I regrouped, refocused, pushed myself and amazingly came in fourth,” he said.

“It’s amazing what the mind and body can do if you do it for the right reason,” he said.

He still trains 12 times a week, covering 100 to 130 miles. That includes five “double days where I run 10 to 12 miles in the morning and four to five miles in the afternoon.” He generally saves his longest runs for Sunday.

“I like to cover the full distance, and one day I ran 28 miles at Mammoth Lakes,” he said. “Saturday I did 19 miles.”

On a 2 hour, 8 minute run, “a lot of things go through your mind,” he said. “Sometimes I have flashbacks and think of family, or as a Christian, I pray.”

His mantra – “It’s never too late to learn, plan ahead, pursue and achieve goals in life” – resonates with National University’s students.

“Many have balanced work, families and other bumps in the road to complete their educations either online or at one of our 28 campuses,” he said.

Armando Orozco, 38, the son of Mexican immigrants, got kicked out of four middle schools in south Sacramento for fighting. He now works full-time as a maintenance supervisor, just completed his master’s degree in organizational leadership and hopes to enter a Ph.D. program in education at California State University, Sacramento.

“We make our own roadblocks in life, and we have to find our way around them,” Orozco said.

Since scoring his victories, Keflezighi has become a brand that includes the GoMeb shoeline, his own limited-edition Meb 8s ElliptiGO bike, an autobiography “Run to Overcome” and his MEB (Maintaining Excellent Balance) foundation devoted to helping youths through school, sports and good health.

He, his wife, Yoranos, and their three daughters Sara, 10, Fiyori, 8, and Yohana, 6, often go on family hikes and runs, he said.

“You run to get the best out of yourself,” he said. “You must get up when you have fallen and work harder and smarter and stronger.” Stephen Magagnini: 916-321-1072, @SteveMagagnini