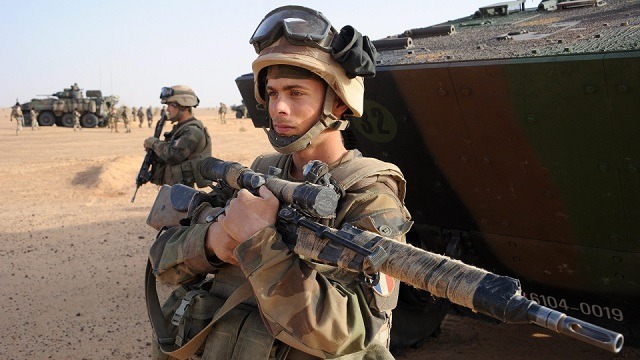 BAMAKO (HAN) December 23, 2015 – Public Diplomacy and Regional Stability Initiatives News. France says its forces in Mali have “neutralized” 10 fighters from the al-Mourabitoun, the armed group which claimed responsibility for the deadly attack on the Radisson Blue hotel in November.

The French defense ministry said in a statement late on Tuesday that its forces led an operation last weekend in Menaka, northeastern Mali. “After heavy fighting that lasted nearly four hours, two pickup trucks and a dozen motorcycles were seized. Ten terrorists were neutralized. A large quantity of arms and explosives was recovered,” the statement read. Formed in 2013, al-Mourabitoun is active in northern Mali and Africa’s Sahel region.

Mali declared a 10-day state of emergency on Nov. 21, after the hostage crisis at the Radisson Blu hotel in Bamako left at least 19 people dead, including several foreigners. Al-Mourabitoun is now divided into two factions, one calling itself Al-Qaeda in West Africa, led by Mokhtar Belmokhtar, an Algerian. This faction has claimed responsibility for several attacks in the region, including the Radisson Blu attack.

It also claimed responsibility for: a 2013 hostage-taking incident at a gas plant in southeastern Algeria; an attack on a nightclub in Bamako earlier this year in which five people were killed; and the attack on Byblos Hotel in Sevare, central Mali last August that killed 17 people.

The second faction pledged allegiance to ISIL last May and is led by Abou Walid al-Sahraoui. Despite the presence of French and UN peacekeeping forces in Mali, insurgents are still very active, especially in the northern part of the country. On Monday, Malian authorities declared another national 10-day state of emergency. Source: worldbulletin