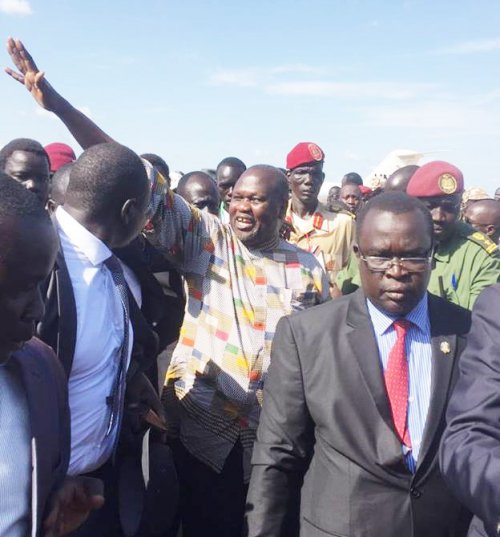 Machar’s plane touched down in Juba at about 3:45pm. The top opposition leader who chairs the Sudan People’s Liberation Movement (SPLM-IO) was received by several of his senior officials and a number of government ministers.

Machar, dressed in African fashion, from the airport drove straight to the Presidential Palace (J1) where President Salva Kiir, his main rival, but peace partner, was waiting for him. He immediately took oath of office as first vice president of the world’s youngest nation before President Kiir. This is expected to be followed by formation of transitional government of national unity in the next few days.

A former vice-president since year 2005 when South Sudan became a semi-autonomous government following signing of a Comprehensive Peace Agreement (CPA) with Sudanese President Omer el Bashir, Machar was sacked by President Salva Kiir two and a half years later after South Sudan became an independent nation.

He and President Kiir fell out over the future of the ruling SPLM party and its leadership as well as over affairs of the government. This subsequently resulted to clashes between their presidential guards on Sunday, 15 December 2013, splitting between loyalists of Kiir’s Dinka and Machar’s Nuer ethnic groups.

President Kiir then accused Machar of allegedly planning a coup, which the latter said was a false claim, further accusing the former of allegedly stage-managing a coup in order to silence voices of opponents.

Machar after the clashes and successful escape to the bushes formed what he said was a “resistance movement” some weeks later to fight a “dictator” who massacred “thousands of civilians” in the capital, particularly targeting an ethnic Nuer community from which he hails.

A war raged on for two years, spreading to some other states, particularly in Machar’s home region of Upper Nile. Skirmishes also occurred in the other two regions of Bahr el Ghazal and Equatoria.

The two rival parties together with other stakeholders in the conflict, however, signed a peace agreement which called for political and institutional reforms in the country.

The rebel leader was airlifted to Juba from his headquarters of Pagak via Gambella airport in Ethiopia by a United Nations plane, 8 months after signing the IGAD-sponsored peace agreement on 17 August 2015.

In accordance with the peace agreement, the opposition leader, who becomes first vice president in the power sharing deal, will also be the commander-in-chief of a separate army and police of the Sudan People’s Liberation Army in Opposition (SPLA-IO), with separate structures from the other co-army and police commanded by President Kiir.

The transitional government will run the country for 30 months from formation until elections are conducted at the end of the interim period.

The opposition leader in a statement to reporters at the Juba airport upon arrival said the priorities were to tackle insecurity and restore stability, revive the country’s economy and address humanitarian concerns.