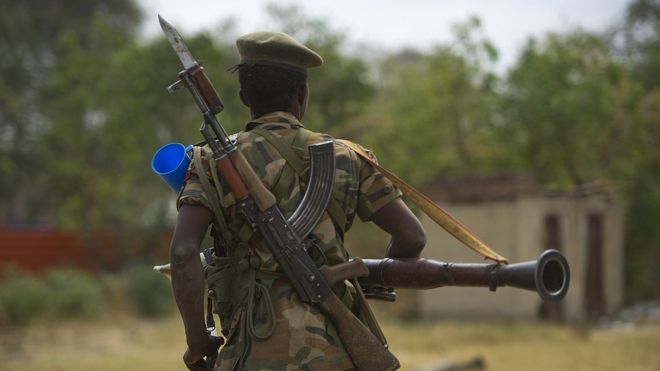 JUBA (HAN) July 30.2016. Public Diplomacy & Regional Security News. South Sudanese former First Vice President, Riek Machar, who was recently removed in a controversial process after fleeing the capital, Juba, has warned that his troops may soon take over Juba unless a third party force was quickly deployed and undo the “illegal” scrapping of the August 2015 peace agreement by President Salva Kiir.

Heavy fighting has been going on for the past three days in the bushes around Juba as at least 10,000 troops loyal to President Kiir, backed by tanks and helicopter gunships, have been battling forces loyal to Machar in hunting him down from where he has been “hiding around Juba.”

Hundreds of wounded soldiers have already been brought back to the hospitals in Juba as a result of the fighting in the forests, with hundreds more feared dead on both sides.

Machar has however warned for the first time that if the attacks continued and a third force is not soon deployed to separate the two rival armies, he will order his troops to match on to Juba, with the aim to capture in order to restore peace and stability.

“My troops are ready to storm the capital Juba and take control,” Machar told the Turkish AnadoluAgency on Friday.

Since the renewed violence between his fighters and government troops on 8 July, Machar has been in hiding since 11 July, after four days of fighting with his 1,300 troops, after his residence was bombed using helicopter gunships to kill him.

“I went out of sight when I learned that the goal was to eliminate me,” he said in a telephone interview.

While Machar called for a third party force to take over the security of the capital, Juba, so that he could resurface and continue with the implementation of the peace agreement as First Vice President, President Kiir, probably seeing having an upper hand in the conflict at least during the start of the fighting, rejected any deployment of additional “single foreign soldier” in the capital.

Now with the fighting heavily escalating in many areas around Juba and with the two sides bringing in reinforcements from other locations, there are fears that the clashes may get closer to Juba and even renew inside the capital itself.

Heavy artillery gunshots were heard on Thursday when forces loyal to Machar reportedly came closer to Juba and clashed with President Kiir’s forces at Luri, his private heavily guarded base and farm for his cattle, but allegedly “got away with hundreds of cattle belonging to President Kiir.”

Machar said the peace implementation will not succeed unless a third force is deployed or he will take over the capital to restore stability.

“The implementation of the comprehensive peace agreement will not be possible without the deployment of IGAD peacekeeping forces to South Sudan,” Machar added.

The opposition leader who leads his party and commands a separate co-national army, added that his soldiers were more united than ever and claimed the renewed fighting had been orchestrated by Kiir in a bid to wreck the peace agreement signed in August last year.

On Monday, President Kiir replaced Machar as first vice president with Taban Deng Gai. Machar declared the move “illegal and a conspiracy” and renounced Gai as “not a member of the opposition group” since he dismissed him from the party a day before his nomination.

He said he expected the African Union and the United Nations to oppose Gai’s appointment and deem it null and void.

Gai, who first said his controversial nomination by a few of his party officials was “temporary” to fill a “vacuum” until Machar returns to Juba to give him back the seat, however, on Thursday declared that he will stay in the position permanently until elections are conducted in 2018, and called on Machar to either come back to Juba and live as a mere ordinary citizen or stay away and live in exile.

Machar’s opposition party has accused both President Kiir and his ally Gai of the conspiracy to destroy the peace agreement by compromising almost all of its significant provisions meant to change the country.

There are fears of a return to a “full scale war” in the country with even more devastating impact than in 2013 given the ongoing escalation of fighting around the capital. (ST)