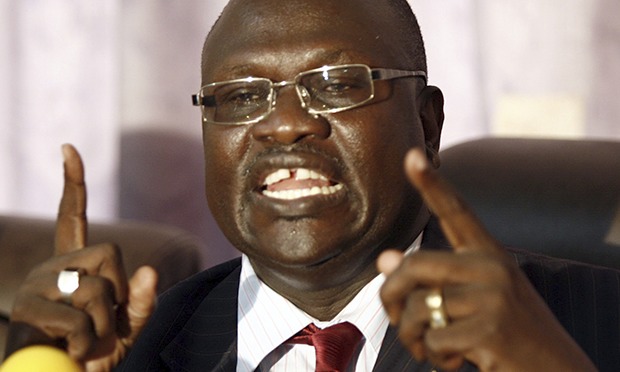 Machar in his first public statement to the BBC Focus on Africa on Friday after abandoning his base in the outskirts of Juba early this week said he is “around Juba” but would neither disclose his location nor return to the town to meet President Kiir until the security issues were addressed.

He was responding to the call by President Kiir to meet him. Machar however said he feared for the lives of his officials and for himself after the incident, adding he was also worried about the safety of his ministers currently inside Juba.

“We have a pending meeting, he as president and me as vice president. And also if it were a normal situation, we would meet, but the incident that took place on the 8th [July] in the State House is a very despicable incident, where there was a shootout, and a dog fight, when we were in a meeting,” Machar told the BBC.

“To me that was a calculated plan to kill me,” he said.

Machar’s comments confirmed earlier statements from his spokesperson, James Gatdet Dak, who said shortly after the fighting erupted at the palace that the attack on “Machar’s bodyguards” was intended to “harm” or “arrest” him. The media official said he suspected that the plan was to scare Machar away from the palace compound and then get killed in crossfire if he tried to leave the palace so that the perpetrators would deny knowledge of how he died.

However, Machar decided to remain in the palace until he was escorted by a combination of his force and those loyal to President Kiir. But on Sunday, his military base and residential area was attacked and his house bombed, resulting to relocation of the base.

The First Vice President who also leads an opposition faction of the Sudan People’s Liberation Movement (SPLM-IO) said he was willing to return back to Juba but after a third force is deployed in the capital to take charge and ensure safety and no return to violent confrontations. He said he could not trust President Kiir’s assurance to protect him and his officials.

“That is why the IGAD Council of Ministers decided that there should be an intervention force, third force, that be deployed in Juba and Juba be demilitarized,” he said.

The opposition leader also condemned the Friday’s arrest and beating of his party’s secretary general, Dhieu Mathok Diing, who is also minister of Energy and Dams. Machar said he immediately called President Kiir after receiving the news that his minister was beaten at Crown Hotel, adding that President Kiir denied knowledge of what had happened.

The transitional government of national unity, Machar said, is “fragmented and split”, adding that there was need to address security issues in Juba and return the situation to normalcy.

He said he was waiting for the outcome of a proposed meeting in Juba of the chiefs of defence forces from the region on how to tackle the security of Juba. (ST)