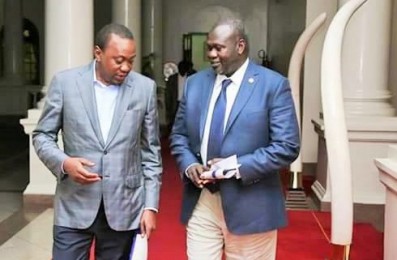 His office media official confirmed that the leader of the armed opposition faction of the Sudan People’s Liberation Movement (SPLM-IO) arrived on Wednesday in Kenya.

James Gatdet Dak, his press secretary, said the opposition leader met with the Kenyan President Uhuru Kenyatta on Thursday at the State House.

He also said the first vice president on Thursday briefed the SPLM-IO leadership present in Nairobi about the ongoing preparations for him to go to the South Sudan’s national capital, Juba, and take up his position in a transitional unity government.

Dak added that Machar is committed to his soon return to Juba as soon as his forces are transported to the national capital.

“Dr. Machar reaffirmed his readiness to return to Juba as soon as forces arrive in the capital in accordance with the peace agreement,” he said.

Dozens of SPLA-IO senior police generals, he said, were airlifted from Pagak to Juba on Thursday and that military forces may begin to arrive in Juba in the next few days if the logistical arrangements pertaining their transportation are put in place.

There has been delay in the transportation of 1,370 first phase of military and police forces of the SPLA-IO, partly due to reluctance of Troika countries to transport some of their light weapons such as PKMs and RPGs 7.

He said the forces may arrive in Juba any time soon with their weapons.

Demilitarization of Juba and deployment of joint police and military forces from the two warring parties is needed before Machar could return to Juba and a transitional government formed.

The transitional government will run the country for a period of 30 months, pending elections.