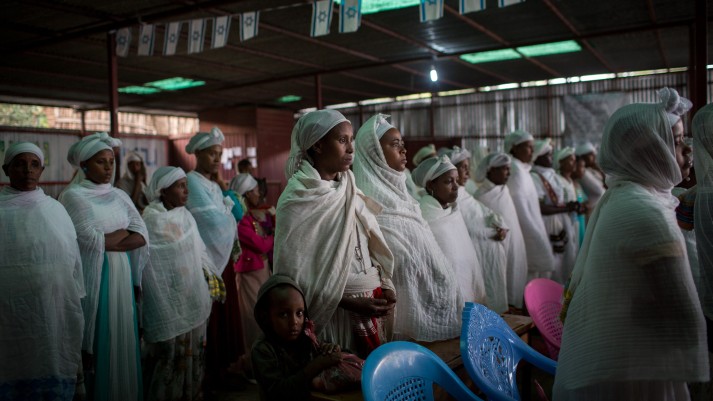 ADDIS ABABA (HAN) August 1.2016. Public Diplomacy & Regional Security News. Falash Mura is the name given to the community of Ethiopians who practice the Jewish faith and claim the right to live in Israel. Every year, the city of Gondar hosts what is billed as the largest Passover celebration in the world. The Falash Mura community bakes and sews for days, preparing for the Jewish holiday. While thousands of other Falash Mura have been airlifted to Israel, for these devotees, the struggle to return to what they see as their spiritual homeland continues. Filmmaker Lior Sperandeo documents this Ethiopian “Jewish island” where people dream of immigrating to Israel. I spoke with him about his The People of project.

Who are the people you feature in your film?

In the local Amharic language, they are called the Falash Mura, “a man with no land.” These are Jews who in the 19th century were converted to Christianity and thus were not welcomed to Israel like the rest of Ethiopia’s Jewry. Falash Mura is not a nickname favored by the Jews of Ethiopia, but rather a moniker that stuck through time. Their dream is to immigrate to Israel, where they can practice a normal Jewish life.

Why did you choose to focus on this community?

I’ve heard about the Falash Mura’s struggle to return to their spiritual homeland long before going to Ethiopia, but the logic seemed sound: If they had chosen to convert and turn their backs on Judaism, why should they be allowed automatic citizenship in the Jewish state? It was only when I set foot in Gondar that I understood how wrong I was. I found myself in a beautiful ”Jewish island” in the middle of Africa, and I knew that a new journey was about to begin. This is another muted community with a story that has to be told.

What was the best part about the experience?

Changing my perspective on this matter. The stated reason for not allowing the Falash Mura to return to Israel is that they are not recognized as Jews. But after my visit I can testify that this is an absurd claim. In Gondar I found one of the most vibrant and dedicated Jewish communities that I have experienced. These are men and women who value their Jewish religion and traditions in the most genuine way. In 1950, Israel created the Law of Return, which gives all Jews and spouses of Jews the right to immigrate to and settle in Israel. This made me pause and ask myself, What is the real reason Israel won’t let them in? I’m not sure a Jewish community in any other continent [would] be treated this way. This is why I created this film, to shed more light on this matter in order to help this community to fulfill a dream.

Were there any challenges?

It’s the biggest and also the most common challenge for a photographer in a foreign country: building a level of trust with the community. It is usually a time-consuming and exhausting process but also the only way to peel back the layers and reach the depths of the issues I am trying to explore. The key is finding a common language that allows me to connect to my subject and go from there. I started showing up every morning at the synagogue in Gondar, with a kippah on my head and the camera in my hands. I am never at ease when I enter this holy building. It feels like my presence is interrupting something important and bigger than me. This was not the case with the synagogue in Gondar. My presence was welcome. I had every reason to feel like an intruder, but I felt at home. It took only a few days before the members of the community got used to the idea of this guy, uncomfortably wearing his kippah, running around snapping photos of them. They started to open up, and I became that fly on the wall.

How long did the shoot last?

About a week, just before the Jewish holiday of Passover, [which] commemorates the story of Exodus, when the Israelites were freed from slavery in Egypt. Every year Gondar hosts the largest Passover celebration in the world, with over 3,000 guests. Members of the community work for days, sewing and baking thousands of handmade round matzoth. On the night of Passover, each song and verse received a new meaning to me—to think that I have the privilege of celebrating the festival of freedom and liberty, while here my Jewish brothers and sisters are still waiting for their exodus.

What are you working on next?

I continue with my latest web series The People Of, where I highlight different human and social struggles around the world in order to create a tool and voice for muted populations. I’m looking for my next destination.

Know of a great short film that should be part of our Showcase? Email SFS@natgeo.com to submit a video for consideration. See more from National Geographic’s Short Film Showcase at documentary.com.