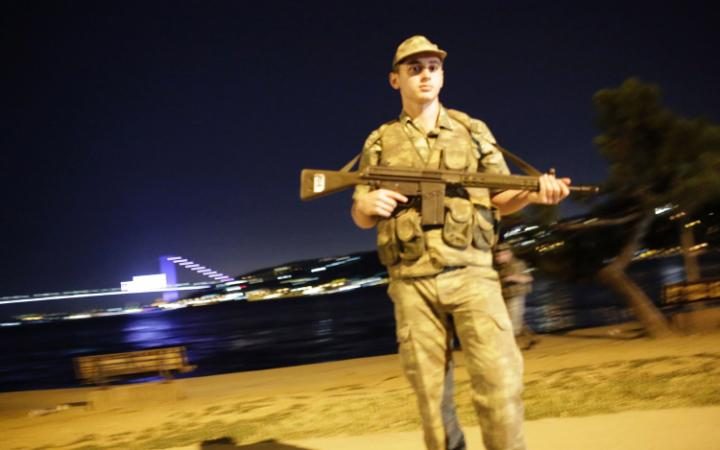 ‘Everyone is on edge. No one knows whether to trust the police and whose side they are on’

Here is another update from Gabriel Turner, 23, a management consultant on holiday in Istanbul (also quoted below from earlier this evening):

Speaking from his hostel in Istanbul, Gabriel Turner, 23, from north London told The Telegraph that “everyone is on edge” as army jets circled the sky above the city:

Once we heard the military were taking over we thought we’d better get back to the hostel.

The streets were crazy, all the cars were going at about 100 miles per hour. It is so chaotic.

Everyone is on edge. No one knows whether to trust the police and whose side they are on. I’ve been told to stay away from government buildings.

Everyone was running and shouting, trying to hitchhike because everything had stopped, there was no public transport.

We hit hiked for about three miles – there were 12 of us crammed in the back of a car.

When we were on the way back, some boys said ‘stop there’s tear gas’. We decided to continue as it was the only way to get back to the hostel but I could smell something acidic in the air.

More on Erdogan statement to CNN

Turkish President Tayyip Erdogan urged people to take to the streets to protest against what he described as a coup attempt by a minority faction within the military, vowing that it would meet with a “necessary response”, Reuters reports

He told a CNN Turk reporter via cellphone that Turkish people must gather in public squares to show their response to the attempted military takeover, in comments broadcast live on television.

Erdogan said he believed the attempted coup would be over within a “short time” and said those responsible would pay a heavy price in the courts.

He said the act was encourage by the “parallel structure” – his shorthand for followers of Fethullah Gulen, a U.S.-based Muslim cleric who he has repeatedly accused of attempting to foment an uprising among his followers in the judiciary and the military.

“I certainly believe that coup plotters will not succeed,” he said, speaking on FaceTime via mobile phone in his first reaction to the move by the Turkish armed forces.

“I urge the Turkish people to convene at public squares and airports. I never believed in a power higher than the power of the people.”

Celebratory gunfire in Damascus after report of coup in Turkey

Celebratory gunfire was heard in Damascus early on Saturday after Turkey’s army said it had seized power from President Tayyip Erdogan, one of Syrian President Bashar al-Assad’s main regional opponents.

Witnesses said people also took to the streets in the Syrian capital and in the government-held section of the northern city of Aleppo.

‘We will not tolerate attempts to undermine our democracy’

Turkey’s democratically elected president and government are in power. We will not tolerate attempts to undermine our democracy.

The illegal statement is being made by the Council for Peace in the Homeland — not the Turkish Armed Forces.

The President is in a secure location as per government protocol. A statement will be made shortly.

The President is Turkey’s commander in chief. The Turkish people, regardless of their political affiliation, will stand against this blatant attack against our democracy.

We welcome the commitment of opposition parties, which expressed their objections to the coup attempt, to democracy.

The atmosphere in Istanbul was one of palpable shock, Zia Weisereports.

As military helicopters circled above the city centre and soldiers locked down roads, bridges and airport, people flocked to the streets.

Then, as it became clear that the military was attempting a takeover, some relaxed – and others panicked.

Revellers enjoying a Friday night beer in Taksim hurried home, while dozens lined up at every ATM in the upscale Cihangir neighbourhood.

Soldiers surrounded Taksim Square, appearing calm, but while some shouted in anger at them, others broke out in applause and chanted the name of Mustafa Kemal Ataturk, the Turkish Republic’s founder.

“The current government is so bad, a lot of people expected a military takeover. I don’t know if I’m happy about this but it can’t be worse,” said Murat, who applauded the soldiers.

Another woman shouted, laughing: “The AKP is finished!”  A young woman screamed: “Traitors!”

The divide in reaction might hint at what is to come. Few expected a military coup, as, after decades of military rule in the second half of the 1950, public opinion is considered as unfavourable to a takeover.

The president says he does not believe the coup will be successful and has urged people to take to the streets.

History of coups in Turkey

Erdogan is giving his first statement

The president says this is an act encouraged by ‘parallel structure’ in interview with CNN.

He states it is an uprising attempt by a minority within the military.

Obama briefed on situation in Turkey

US President Barack Obama has been briefed by aides on events in Turkey, the White House said Friday, as a shock military coup attempt was underway.

“The president will continue to receive regular updates.”

Turkey now under control of a ‘peace council’

State TV channel says the country is now under the control of a “peace council” that will ensure the safety of the population.

It states that democratic and secular rule of law has been eroded by the Erdogan government.

State TV channel TRT reports that all airports in Turkey are now closed.

Rush to withdraw money from ATMs in Turkey 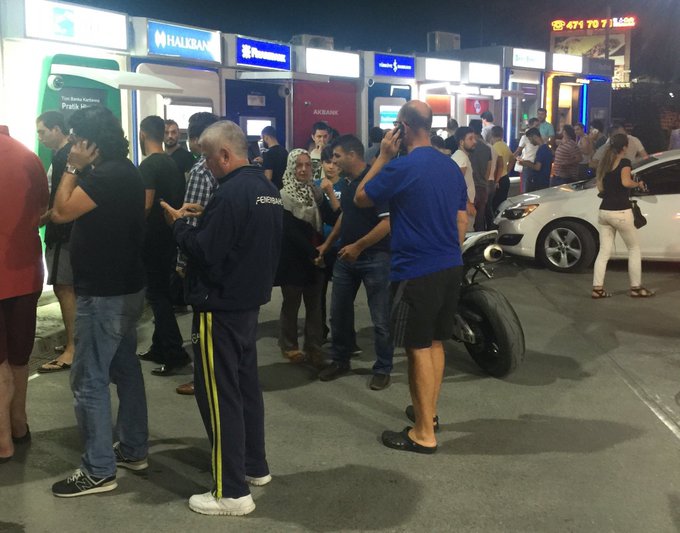 Soldiers ‘inside buildings of state broadcaster’

Reports that soldiers are at the HQ of state TV channel, TRT, in Ankara.

A source from the presidential office has told Reuters that Erdogan is “safe”.

Turkey’s currency has suffered its heaviest fall in two months as investors took fright at a coup by the country’s military, Ben Martinreports.

The lira plunged as much as 3.8pc to 2.9901 against the dollar as money managers took fright at reports Turkey’s army had taken control of Ankara, the capital.

US Treasuries, a classic safe-haven investment, were in demand on Friday evening, with yields on American debt falling four basis points to 1.552pc. Bond yields move inversely to prices.

Timothy Ghriskey, of Solaris Asset Management, told Bloomberg: “The financial markets react very quickly to headlines like these, and it’s all about reducing risk.”

All flights from Istanbul’s Ataturk Airport have been cancelled, a Reuters witness said on Friday, citing a pilot, after the military said it had taken control of the government.

“General Hulusi Akar has been taken hostage by a group in the military who attempted an uprising,” the agency said citing “credible sources”.

Reports of clashes between police and army

Dorian Jones a British journalist based in Istanbul said:

“Tanks are seen in the streets. There are reports of clashes between the police and the army,” he told Sky News, adding there were also reports that police guarding the presidential palace had been disarmed.

“I have been speaking to various friends across the city, some are reporting that they are hearing gunfire in the streets.”

In a statement, the Turkish military says the rule of law must remain the priority.

“The power in the country has been seized in its entirety,” said the military statement read on NTV television, without giving further details. The military’s website was not immediately accessible. 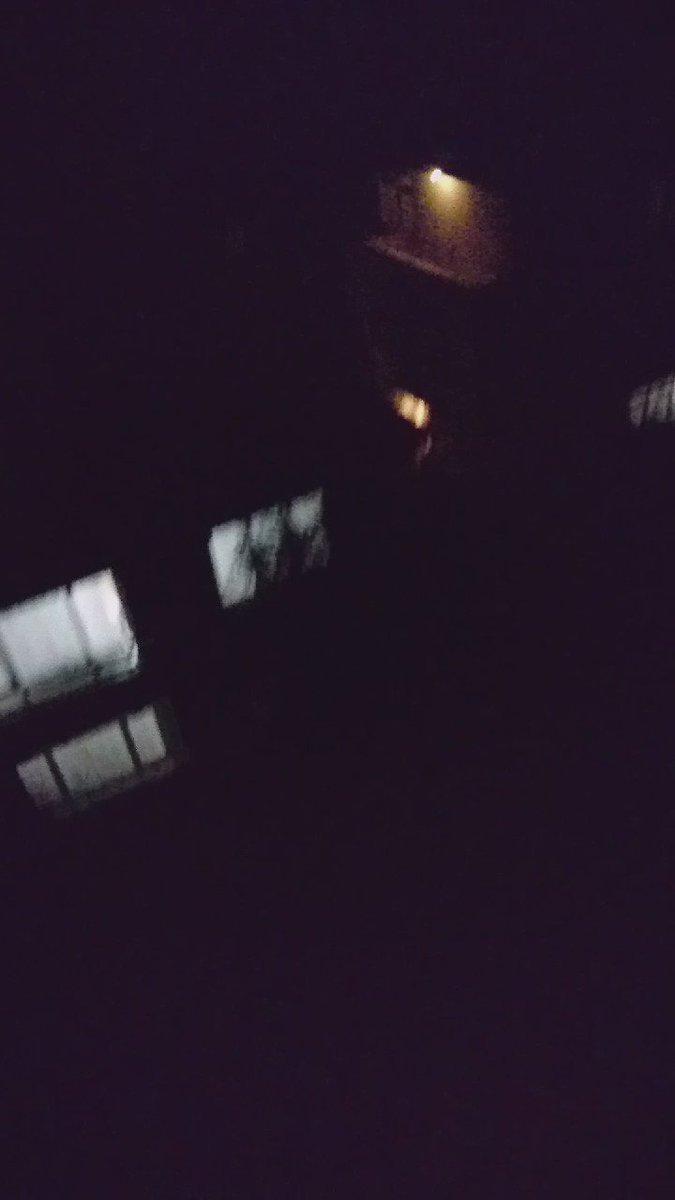 Tanks on the streets of Istanbul

‘The army are taking over everything’

Gabriel Turner, 23, a management consultant from north London, is on holiday in Istanbul and described how there had been heavy police and security presence throughout the day before the military coup got underway after sunset.

He told The Telegraph:

“Earlier today there were police everywhere. I thought that was normal but the two Turkish girls I was with told me  it wasn’t normal. We were walking around the centre of Istanbul, at the Grand Bazaar there were police at every entrance and exit with lots of guns.

“A police helicopter was flying very low  at sunset, it was about 8pm. It looked like it was searching for something. Later on, at about 10.30 I was in Karakoy, a bar area in the city centre and everyone started looking at their phones. A man who owns the bar told us that the army are taking over everything.

“Then we walked down towards the a quieter area by the sea. While we were walking, my friend said the army had closed brides across the Bosphorus. We could see army helicopters in the sky.

“We went inside a cafe and everyone was on their phones looking worried, texting. Lots of people were running to catch a ferry – because the bridges were shutting and people wanted to get home. Then policemen came out of the ferries on their walkie talkies, looking very alert.” 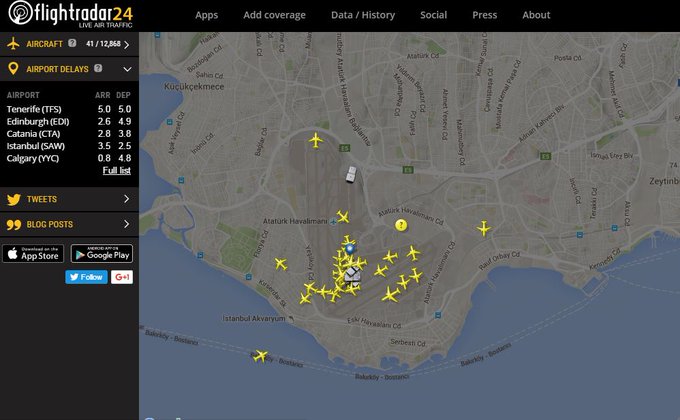 “Attempt by part of muilitary’

Yildirim says “it would be wrong to call it a coup” but that there has been an attempt by “part of the military”.

He describes it as an “illegal attempt” to seize power.

Turkey would never allow any “initiative that would interrupt democracy”, he said, and promised the perpetrators “will pay the highest price”.

Binali Yildirim has called for calm.

The Bosphorus and Fatih bridges were closed by the gendarmerie – a branch of the Turkish military dedicated to internal security – for traffic travelling from Asia to Europe, NTV television said. Traffic was still moving in the other direction.

Meanwhile, Turkish military aircraft were heard flying low over Ankara, AFP correspondents in the capital also reported. There was no immediate explanation for the cause of the incidents.

Rumours that Turkey has declared martial law on Twitter

All unconfirmed at this stage.

Lack of information coming out of Turkey

Gunshots were heard in the Turkish capital of Ankara on Friday, a Reuters witness said, as military jets and helicopters were seen flying overhead.

Broadcaster NTV reported that both of Istanbul’s bridges across the Bosphorus, the strait separating the European and Asian sides of the city, had been closed to traffic.

It was not immediately clear if the events were related.