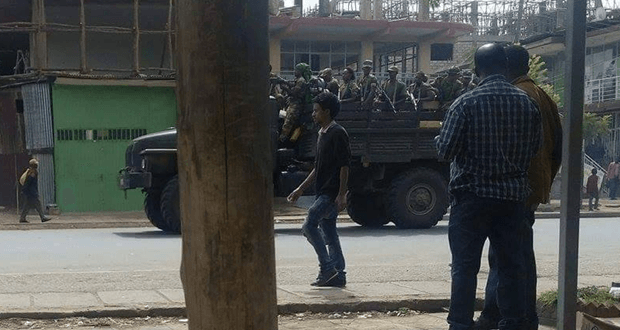 The U.S. Embassy is monitoring recent social media reports of planned protests and demonstrations in the Oromia region this coming weekend of August 6-7, 2016. The disseminated messages call for protests at all district and zonal level capitals across Oromia.

The U.S. Embassy is restricting all personal travel by U.S. Chief of Mission employees in Oromia through August 7, 2016. The U.S. Embassy anticipates that communications such as cellphone and internet could be disabled. Travelers should anticipate traffic restrictions on main roads outside of major cities in Oromia due to road closures and gatherings, and an increased presence of federal police.

Unrest in the city of #Gonder #Amhara city, picture shows partly what went on earlier the day. #Amhara_Resistance pic.twitter.com/wdZoCSxuTm

Reliable sources say two people have been shot and killed in Gondar in the protest that’s underway at the time of this post. A number others have also been wounded as security forces shot indiscriminately at protesters. A soldier was killed in the protest rally that turned violent when regime forces, locally known as Agazi start shooting at the protesters.

Residents of Gondar staged a protest demonstration at the city’s court where the leader of a movement, Col. Demeke Zewdu has reportedly been arraigned. A resident who spoke to ESAT on the phone said the people, having heard that the Colonel was arraigned at the court, flocked at the premises of the court in thousands calling for his release and denouncing the regime. He said more people were on their way to the court.

The Colonel is one of the members of a committee that spearheads campaigns by the people of Wolkait, Tegede and Telemt, who are ethnic Amharas, for the restoration of their identity and territory that had been forcefully annexed to the Tigray region 25 years ago in an apparent move by the ruling clique to incorporate a vast fertile land to Tigray, where the ruling minority hail from.

In a video received by ESAT gunfire could be heard as residents chanted anti-government slogans and denouncing recent statements coming out of regime officials, including the Prime Minister, Hailemariam Desalegn, who said the territories in north Gondar belong to the Tigray region. The demonstrators called the Premier a puppet with no real power.

Police could be seen shooting teargas as a residents continue chanting slogans calling for the release of their hero.

Hundreds of thousands of people last Sunday held protest demonstrations in Gondar and other nearby towns denouncing the regime and calling for an end to tyranny. The people of Gondar last week ignored warnings by the regime and defied the thousands of army and security deployed in the town to stop the rally.

More protest are scheduled for Saturday and Sunday all over the Oromo region and the towns of Debretabor and Bahir Dar in the Amhara region.

According to social media campaigners and also a call by the Blue Party, a massive demonstration will be held in Bahir Dar on Sunday, another major town in the north and all over the Oromo region on Saturday, where at least 600 protesters were killed in the last nine months.

The government controlled media, quoting federal and regional officials, say there were no permissions given to hold any rally. But a loose network of social media activists and Ethiopians in the Amhara and Oromo region say the protests would be staged as scheduled.