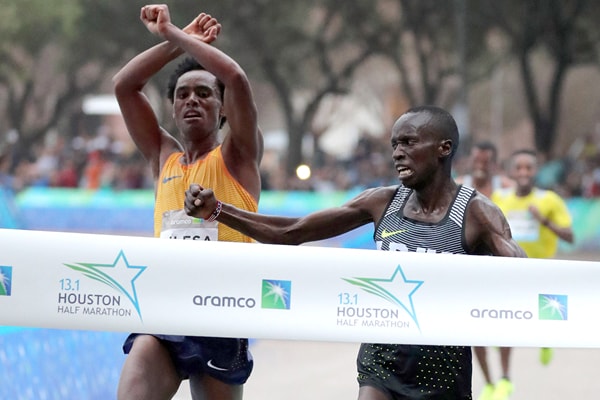 After a runner-up finish in 2014 and a third-place effort in 2013, Meskerem Assefa of Ethiopia extended her nation’s dominance in the women’s marathon with a 2:30:18 to notch her first win and extend to 11 the streak of Ethiopian victories in Houston.

Assefa and defending champion Biruktayit Degefa ran together until the 25-kilometre mark, where Assefa made a subtle move to put six seconds on Degefa over the following five kilometres. Steadily moving away from Degefa, the former 1500m specialist hit 35 kilometres in 2:03:44, 26 seconds in front, and her lead increased to 40 seconds by 40km.

Fighting cramps, Assefa held on over the final two kilometres to win by 26 seconds as Degefa crossed the line in 2:30:44. Becky Wade was the top US finisher, placing third in 2:35:57.

Ondoro was part of a large pack early in the race, which was whittled down to five at the 25-kilometre mark. The group became four over the next five kilometres, with last year’s runner-up, Yitayal Atnafu of Ethiopia, hanging on Ondoro’s shoulder. Atnafu’s compatriots Abayneh Ayele, a 2:06 man, and Andualem Shiferaw were also in the group.

Ondoro and Atnafu pulled away from the rest of the group between 35 and 40 kilometres. Ondoro then broke Atnafu and built up a 10-second lead by 40km and went on to win in 2:12:05, snapping an eight-race winning streak by Ethiopian men.

Atnafu had no answer for Ondoro’s strength in the final two kilometres and ended up second in 2:12:33 while Ayele placed third in 2:12:44. Elkanah Kibet was the top US man, placing sixth in 2:17:25.

Kenya’s Veronicah Nyaruai Wanjiru helped control the pace through the early stages of the women’s half marathon, covering 5km in 15:52 and 10km in 31:42, 13 seconds quicker than her personal best.

Race record-holder Mary Wacera was already four seconds adrift after 10 kilometres, but Ethiopia’s Dera Dida Yami was able to match Nyaruai’s pace during the first half.

Nyaruai, the 2005 world U18 and 2006 world U20 3000m champion, built up a 12-second lead over Yami by the 15-kilometre point. Meanwhile USA’s Jordan Hasay, making her half-marathon debut, was gradually moving through the field and trailed Wacera by just five seconds at 15km.

Nyaruai extended her lead by 20km. Although Yami closed slightly in the final kilometre, Nyaruai had already done enough and won comfortably in 1:07:58, the fourth-fastest time ever in Houston.  Yami crossed the line eight seconds later.

Wacera, who had been passed by Hasay at 20km, regained third place in the final stages, clocking 1:08:38. Hasay’s time of 1:08:40 is the fastest time ever recorded by a US woman in Houston.

The most exciting finish of the day came in the men’s half marathon.

One week after sprinting to victory at the Great Edinburgh Cross Country to beat a field that included world and Olympic champion Mo Farah, USA’s Leonard Korir once again unleashed a ferocious finish to beat another Olympic medallist.

A group of 10 men went through 10km in 28:51. By the next 5km mark, Korir and Olympic marathon silver medallist Feyisa Lilesa were nine seconds behind Yigrem Demelash and Samsom Gebreyohannes.

Fikadu Tsadik and Hiskel Tewelde Ghebru were in a group of four with Korir and Lilesa at 20km, but down the final stretch Korir and Lilesa made a mad dash to the tape. After a bit of jostling for position, Korir came away with the win as both men were awarded a time of 1:01:14.

The pair finished three seconds ahead of Ghebru and Tsadik, who were both timed at 1:01:17.

Organisers for the IAAF