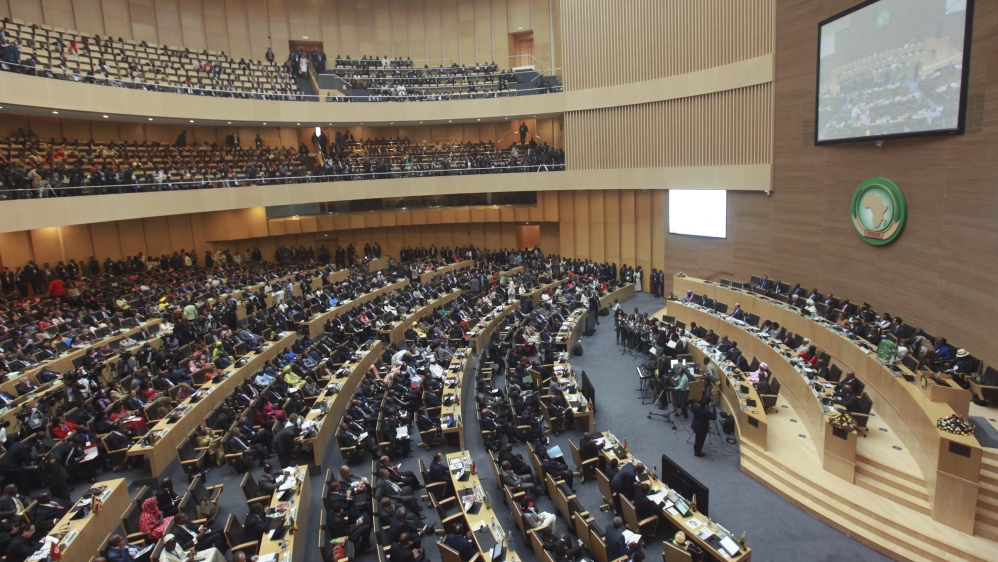 Addis Ababa – As the early morning sun pierced through the morning chill of the waking city, diplomats with flag lapels pinned to their suits filled the spacious lobby of the African Union headquarters in the heart of the Ethiopian capital.

The diplomats and dignitaries were gathered following a night of intense lobbying and backroom deals to try to secure their preferred candidate for the AU’s top job in the upcoming election.

Security in front of the headquarters building, which is the tallest in the city and was built by the Chinese at a cost of some $200m, is tight. New and long-term AU heads of state have gathered in Addis Ababa to elect a new chairperson.

Five candidates are competing for the top seat of the continental body. The new chairperson will take office on a four-year term replacing the outgoing South African politician Dr Nkosazana Dlamini-Zuma, who took the post in 2012. She’s not seeking re-election and is thought to be gunning for the presidency in her home country.

Zuma had admirers and critics in equal measure. She made history when she was elected the first female leader of the AU and did much to soften the image of the body which had until then been led by old men.

But whoever succeeds Zuma, the challenges awaiting them are plenty.

READ MORE: African Union Commission: Who will be the next chair?

The 54-member body is struggling to fund its missions across the continent. With conflicts – old and new – still continuing in some parts of Africa, the AU has been increasingly bold in sending troops into conflict zones to quell the unrest. But sending thousands of troops to foreign countries is not cheap.

In 2004 the AU established the Peace and Security Council, and since then the body has either sent or authorised the deployment of more than 64,000 troops and police officers to intervene in conflicts, according to the New York-based think-tank the Council on Foreign Relations.

So far, the continental body has not been able to fund its peace missions abroad – its Somalia mission is funded by the EU and its South Sudan one is backed by the UN.

“The AU is shouldering a heavy burden on its shoulders. It has taken on the heavy burden of protecting world security. It is a big financial burden that Africa alone can’t and should not bear,” Dr Solomon Ayele Dersso, an Addis Ababa-based legal academic and analyst of African affairs, told Al Jazeera.

In the past year alone, pro-democracy demonstrators and activists on the continent have faced harsh treatment at the hands of security services: from Ethiopia, home of the AU, in the east to Democratic Republic of Congo and Burundi in the heart of Africa.

Rights groups such as Amnesty International have been vocal in calling for the incoming chairperson to prioritise issues of human rights.

“The incoming chairperson must take the promotion and protection of human rights not just as a convenient afterthought, but an essential and sustainable element of the African Union’s conflict prevention strategy,” Netsanet Belay, Amnesty International’s Africa Director for Research and Advocacy, said in a statement released on the day after the summit began.

Unemployment in the member states is also unbearably high, forcing young Africans to seek better lives outside the continent. A record number of young Africans have risked their lives crossing the Sahara desert before embarking on perilous boat journeys over the Mediterranean to reach Europe and start an uncertain life.

Last year a record number of 181,000 migrants and refugees arrived in Italy, up from the 154,000 of the previous year. More than 90 percent of them set off from war-torn Libya – an AU member state.

The number of deaths also hit a new grim record: more than 5,000 perished crossing the Mediterranean.

But AU is attempting to stem this flow and has put forward an ambitious development project  – Agenda 2063 – which, it says, will lift the continent out of economic and social hardships.

It is not only lack of jobs forcing Africans to risk the treacherous route to Europe. Droughts, man-made ones, are also becoming increasingly common on the continent. High rates of deforestation and global warming have played a huge part in this.

Some of the old problems that faced the continental body since its inception in 1963 still exist. Many of the organisation’s most vocal and well-known leaders – such as Uganda’s Museveni, Zimbabwe’s Mugabe and the current chairperson Idriss Deby – lack the democratic and human rights credentials the body desperately needs.

It is an almost impossible battle convincing the continent’s citizens, activists and human rights bodies that the body takes human rights issues seriously.

The AU, while being led by President Deby of Chad, who came to power in 1990, has been vocal in calling for Jammeh to relinquish power in Gambia and has also criticised Burundi’s Nkurunziza for going against the constitution and seeking a third term. But the organisation was happy to appointment President Deby, who has been accused of human rights violations, to be its chairman.

“The AU has a consistency issue. National interests play a huge role in how it engages and implements agendas. It is a political entity and not a human rights body,” Dersso said.

For a long time the organisation has also turned a blind eye on a long-standing issue – that of border disputes between member states. Most of the union’s members have border disputes left behind by the colonial powers. Africa’s borders were drawn by colonists and they haven’t changed much.

As the lobbying reaches fever pitch in the Ethiopian capital there is one thing all the experts, dignitaries and heads of states agree on: that the African Union needs to do more to win the hearts and minds of its ever increasing and demanding citizens across the continent.