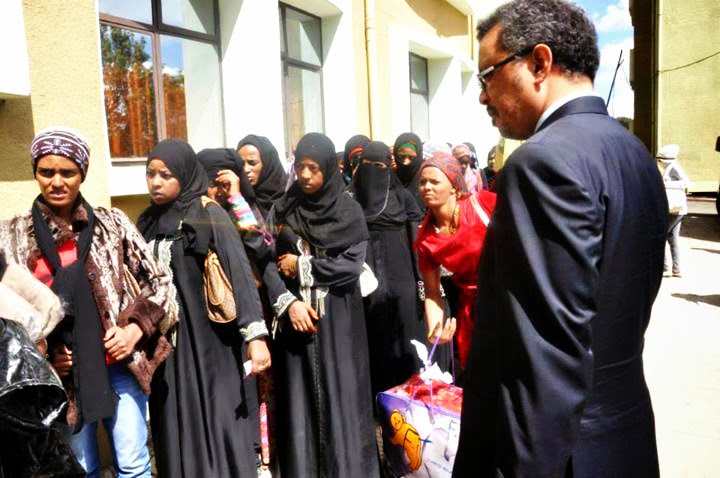 Kuwait (HAN) March 18, 2014 – Arab Times reported that, Several lawmakers have expressed their anger over the killing of a Kuwaiti girl by an Ethiopian housemaid in Sulaibikhat on Sunday, calling on the Interior Ministry to immediately take the necessary action. According to the lawmakers, the ministry should not just stop the recruitment of Ethiopian maids but also deport all those currently working in the country.

They expressed condolences to the family of the victim and urged all Kuwaiti families to terminate the services of their Ethiopian maids regardless of the cost. MP Talal Al-Jalala pointed out the people of Kuwait were shocked by the news on the brutal killing of the Kuwaiti girl who belonged to a prominent family. He asked the concerned authority to impose death penalty on the maid who admitted the crime, indicating the media must be allowed to cover the implementation of the punishment to serve as a deterrent to others.

The lawmaker stressed the need to oblige housemaids to undergo tests regularly to ensure they are not suffering from any psychological illness. He said this is the responsibility of Social Affairs and Labor Minister Hind Al-Sabeeh, in coordination with the Ministry of Health. He also emphasized the need to conduct a study on domestic workers who commit crimes to look into patterns like nationality, age and other factors to help the State take a decision on stopping the recruitment of housemaids from a particular country based on the results of the study. He also suggested imposing tougher punishment on ‘killer’ maids and to open a special file for maids in Kuwait. He clarified he has no intention to discriminate the housemaids or downplay their role, because his aim is to guarantee the safety of citizens and residents.

Commenting on the same issue, MP Humoud Al-Hamdan asserted the number of crimes involving foreign communities, particularly the Ethiopians; has been increasing at an alarming rate. He asked the government to take precautionary measures before allowing maids to enter the country; such as ensuring they have no mental or psychological problem, and are free from infectious diseases. He also underscored the importance of organizing public awareness campaigns in different languages to familiarize the expatriate workers on the local culture and nature of the Kuwaiti society, as well as ways of dealing with people from all walks of life.

Moreover, MP Abdullah Al- Tamimi holds the domestic worker offices accountable for the inappropriate procedures in hiring housemaids, especially those from Ethiopia. He underlined the need to lay down rules and regulations in recruiting housemaids that must be followed by these offices. He said the security statistics he studied recently revealed that most expatriates accused of committing murder came from Ethiopia, especially the women.

He added the Interior Ministry must deport these housemaids as soon as possible to prevent such crimes. He also urged all Kuwaiti families to end contracts with Ethiopian maids, if they have, in spite of the huge financial losses; stressing the Interior Ministry should quickly take the necessary measures to repatriate Ethiopian domestic workers. He argued this is not the first time that an Ethiopian is accused of murder as a number of such cases had earlier been recorded.

MP Khalil Al-Saleh asked the government to stop the heinous act of the Ethiopian community and it should not be lenient towards them to prevent recurrence of killings. He added the murder of a young Kuwaiti girl on Sunday is a heinous crime which should not go unpunished, especially since this is the 11th time an Ethiopian is involved in a murder or attempted murder case. Al-Saleh disclosed more than 80,000 Ethiopians are currently living in Kuwait and most of them are domestic workers. He then applead to Deputy Premier and Minister of Interior Sheikh Sabah Al- Khalid Al-Sabah to stop domestic worker offices from hiring Ethiopian maids.

MP Saleh Ashour asserted this incident is not new to us and its repetition indicates failure in the government. He asked the Ministry of Interior what steps it has taken to curb the rising number of murder cases. MP Safa Al-Hashem sympathized with the young Kuwaiti girl’s family, asking the government why Indonesian laborers have been banned from entering Kuwait while members of a community implicated in several murders are allowed to stay in the country. She said the number of murders committed by Ethiopians totaled 11.

Banning
Majority of the MPs support the idea of banning Ethiopian housemaids from entering the country due to the number of murder cases involving members of the community – more than other nationalities. In another development, Al-Hashem said she is confused by the response of the minister of health to her queries about the High Council of Medical Specialists, complaints of doctors and the number of doctors. She said the minister’s response was, “The concerned parties declared the unconstitutionality of the submitted query.” The MP asserted the minister is digging a grave for his political career due to his answer. She threatened to submit an interpellation request if the minister does not answer properly by the end of March, asserting that her queries are constitutional. On another issue, Al-Hashem disclosed a report has revealed that the losses incurred by Kuwaiti Stock Exchange since its establishment reached KD 5 billion.

She said every time she submits queries to the minister of commerce and industry regarding the issue, the standard answer she receives is, “My obligation towards the stock market is supervision only.” Al-Hashem asserted the law gives the minister authority to ensure the stock market reaches its target, wondering if he is waiting for losses to reach KD10 billion. She added she has started taking the necessary steps in this regard and if the minister does not take proper action, she has no recourse but to present a grilling motion against him. Furthermore, the Legal and Legislative Committee on Sunday rejected request of the Public Prosecution to lift the immunity of MP Mohammed Tana.

Rapporteur of the Committee MP Abdul-Kareen Al-Kandari revealed the panel also discussed and approved several amendment bills; including civil service, end of service, granting full salary leave to anyone who want to continue his studies and personal interview for job applicants. In the meantime, Al-Kandari confirmed his decision to defer the submission of a grilling request against Minister of Justice Naif Al-Ajmi as the latter has responded to his demand to lay down the executive bylaws for the Anti-Corruption Law passed by the Parliament several months ago. source: Arab Times

HAN Bulletin is your independent, online intelligence resource edited and published by the regional political historian, veteran newsman and founder of www.geeskaafrika.com (Geeska  Afrika Online 1985 -2014). Each week he taps his vast network of international intelligence sources to bring you credible insights into geo-political and geo-strategic developments for  the Horn of Africa. Contact at nurkafi@geeskaafrika.com (Managing Editor/Publisher)