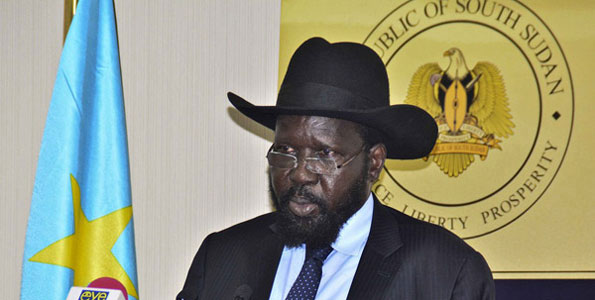 JUBA (HAN) August 28.2016. Public Diplomacy & Regional Security News. The head of the Jieng Council of Elders (JCE), has commended the decision by President Salva Kiir to disown hostile statements from members of his administration towards the United Nations, saying it demonstrated wisdom and responsibility.

“The country is in crisis and for this reason there is a need to exercise strong leadership and take decisions and actions which may be protested by others but which are necessary and good for the interest of the country. The world was waiting to hear what he would say in the parliament. So he acted wisely,” said Ambrose Riiny Thiik.

“He [Kiir] demonstrated strong leadership and should people appreciate the address and support the speech”, he added.

A former chief of justice in the regional administration before South Sudan seceded from Sudan, Thiik said Africa’s newest nation was not an island to be isolated from the region.

The JCE is a tribal group largely comprising of relatives to the president and Dinka politicians loyal to him who mainly act as informal advisors to the South Sudanese leader.

“Yes, we are a sovereign state. We are independent country. There is no argument about. But the truth of the matter is that we support from other countries because we are part of a family of the world. Because of this the government decided to accept in principle the deployment of the protection force but this what does this mean? It means that they will not automatically be deployed without the approval of the government,” stressed Thiik.

He added, “They government will have to get into discussions with IGAD, with the African Union and the United Nations to discuss the specific details of what they would do. There are things government can do, then that will be agreed and left to the government”.

President Kiir recently said those speaking against the deployment of regional protection forces in the South Sudan capital, Juba do not necessarily reflect his government’s position.