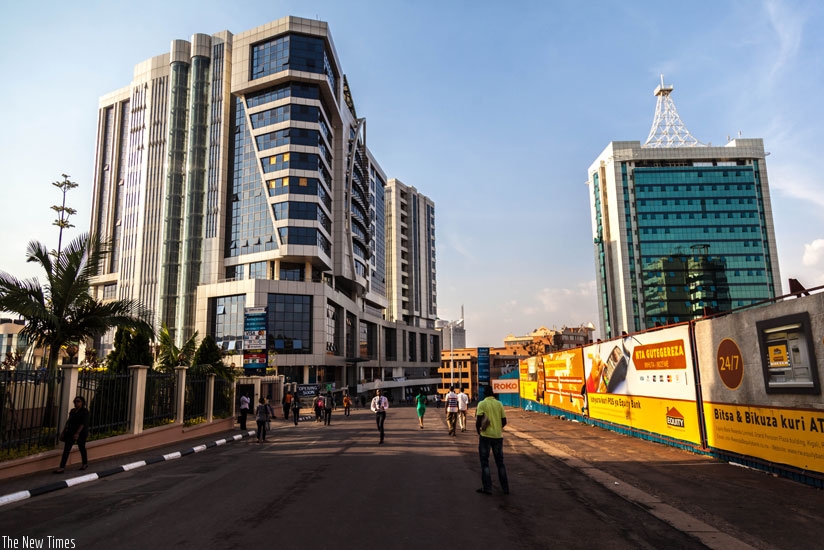 The City of Kigali announced that it was introducing the first car free zone in August 2015, shutting off one of the busiest roads to cars. The decision was met with mixed reactions.

Business people along KN4 Avenue — stretching from Centenary House to the turn to Ecole Belge in the central business district — cried foul when the city declared that the road will only be accessible by pedestrians.

One year down the road, life along the car free road has changed, with majority of small and medium businesses choosing to relocate, while the bigger establishments like banks and other firms housed in the office blocks are hanging in there.

Once one of the city’s busiest roads and financial hub, KN4 Avenue has in the past one year adjusted to the city’s requirements but opinion is still divided today as it was back then.

Hafsa Mupende, a textile dealer, said that she had to move her shop to a downtown location, two months after the area was declared a car-free zone because of lack of customers. Several small traders who rely on walk-in customers have since relocated, with some of the commercial buildings in the zone reporting a less than 70 per cent occupancy rate.

“We had to move because of rent. We were not getting enough customers because of the new changes,” Ms Mupende said, adding that many of the small and medium scale businesses struggling to pay rent had had to move to stay afloat.

But for many, the space, which became the car-free zone, has not lived up to expectation. Leading banks including Bank of Kigali, KCB Group, Urwego Opportunity Bank and Equity Bank are all located on the road as well as institutions such as Mount Kenya University and business facilities such as the M Peace Plaza.

It is reported that some of the banks, including KCB and Urwego, are planning to relocate due to a decline in traffic, even though KCB denies that the plan to move is a result of the car-free zone issue. “We are planning to relocate the head offices to a more spacious, modern setting, but this is a plan we had in mind even before the idea of the car-free zone came up,” says Maurice Toroitich, the managing director of KCB Rwanda.

He, however, admits that there was a decline in traffic especially among driving clients. We registered a decline in volumes of traffic, especially of people who used to drive to the head office and those who would be dropped off. But along the way, some clients got used to the new routes to access the bank,” he added.

Similarly, Bank of Kigali, the biggest bank in the country, registered a decline in numbers of visitors to its head office in the first month, but says the situation has since stabilised.

“Initially, we saw a slight reduction in the number of customers coming to the head office as customers sought options from our branch network across the city.”

“However, after a while, the numbers normalised to nearly what they were before the car-free zone introduction, this means our customers adapted to the change,” said Kenneth Agutamba, the BK Marketing and PR Manager.

The bank lost access to its front parking but its two underground parking areas remained accessible from the alternative routes. “We are so used to the car-free zone that we have even forgotten what it was like before,” added Mr Agutamba.

“It would be great if it got busier with coffee shops, bazaars and simply a space for creative arts just like we see in other car-free zones around the globe,” said Mr Agutamba.

The City of Kigali director of communications Bruno Rangira said that Kigali had fallen behind its plans to transform the car-free zone into the public space it is supposed to be.

“Our plans haven’t been fully achieved, in terms of what we envisage the car-free zone to be, be it in design and the facilities it has to provide. But the tendering process is ongoing to select the right people to transform the CFZ,” he said.

“We are looking to turning the place into a more friendly public space with terraces, benches for people to sit as well as children’s play areas. This process delayed because we needed to pick the right people who have experience in doing this,” he added.

Mr Rangira added that even without further development, the car-free zone has been able to host a number of activities, which helped the public understand the concept behind it.

He argues that today many people realise that such public spaces are needed in a fast developing city, noting that several other places, including Tapis Rouge in Nyamirambo, have been lined up to be turned into “car-free” public spaces.

Two more other locations, Mera Neza, near Mount Kigali and the Primature roundabout will be transformed into public parks for city dwellers to relax and exercise.

“In a fast developing city, such spaces are needed for people to relax, get out of cars and exercise. We are introducing more car free activities to encourage people to use non-motorised means of transport on certain days,” said Mr Rangira.

Every last Sunday of the month, the road from Amahoro National Stadium to the car-free zone in the central business district is closed off for half a day for sports activities.

The city blames the resistance on car owners, who are provided with alternative routes, but defends the decisions to create more car-free zones and car-free zone activities for the benefit of the majority of city dwellers.