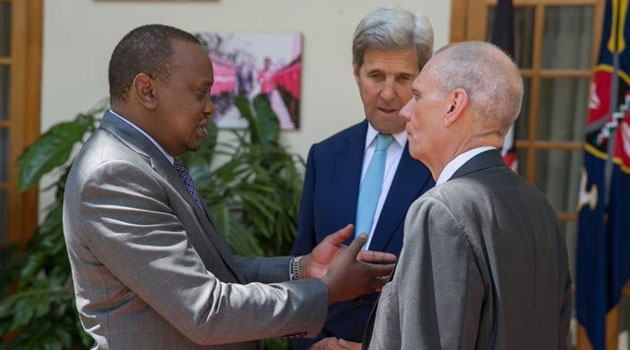 In a meeting at State House, Nairobi on Monday, President Kenyatta informed Mr Kerry that the recent violence in the neighbouring country had had serious implications on the peace agreement signed in August last year. 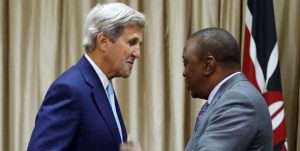 According to him, the process has been “sluggish and under severe threat due to lack of commitment by the parties involved.”

In a statement to newsrooms, Mr Kenyatta told Mr Kerry that the regional Inter Governmental Authority on Development (Igad) council of ministers had created a roadmap to end the fighting in South Sudan.

Consequently, Mr Kenyatta urged the US and the international community not to relent in their support for the region aimed at finding long lasting solution to the conflict in South Sudan.

President Kenyatta also asked for continued engagement to also find lasting solution to Somalia pegged on the Vision 2016 which is in progress.

State House said the President hoped Somalia will stick to the election time frame that will lead to presidential election on October 30.

This follows the endorsement of the electoral calendar by the country’s national leadership forum.

Amisom, said the president, had made remarkable progress and that the African Union (AU) has plans to “drawdown” the force by 2018.

Kenya’s efforts in finding stability in the region won Mr Kerry’s support who said the US looks to Kenya to secure the region and boost economic environment.

“President Kenyatta and Mr Kerry noted, with satisfaction, the strong bilateral ties between Kenya and the US. They also applauded the increasing the investment in Kenya by US firms,” State House said in a statement.